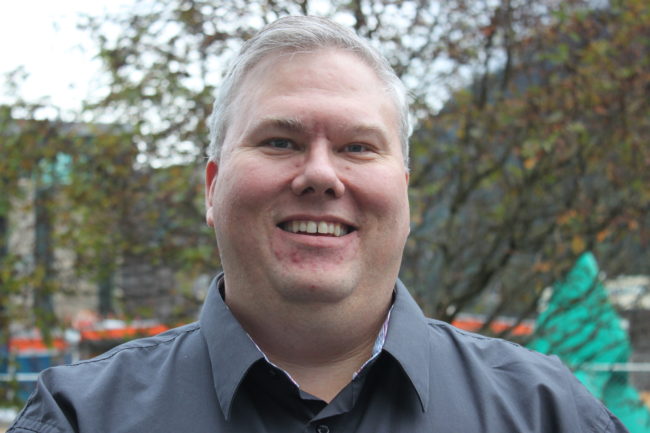 Occupation: Insurance regulator with the Alaska Division of Insurance; teaches “Intro to Public Administration” and “American Foreign Policy since 1945” for the University of Alaska Fairbanks.

Should high school students be able to come and go from their campuses throughout the school day? No.

What was the last book you read or what are you reading now? “Foreign Policy Toolkit”  by Charles Stevenson.

A mixture of both. You need to actually educate kids, especially in the younger years, to enjoy education. There is an economic component, though. There is a purpose for education, a state interest in education as well as an individual interest to make everybody able to go out and make a living. So I would say there’s actually a mixture between the two. There’s also a civic responsibility. An educated workforce is an educated electorate and all those are important to education in my eye.

Yes, it should be. The question will be, can we afford it? That’s one of my highest priorities. I’d put it in my top two, and the reason for that is because research has shown countless times that pre-K is extremely valuable for the total educational experience of a child. That being said, we also need to make sure that we don’t take away from elementary and middle school education, because it also shows that with poor elementary and middle school education, that they just fall back behind. So, it’s important to keep it going throughout the educational experience.

I am comfortable with it and the reason why is that with a Ph.D. in public policy, I believe it’s very important for us to have that information in order to make wise policy decisions. However, when we collect that, we need to make sure that information is confidential and not shared with anybody. I’m very big on the individual confidentiality, but also the value of that information on the policymaking front.

The use of powerful cloud-­based services like Google Docs and Khan Academy are becoming more and more common in the classroom, which also connects students with the big data industry. What do you think about this evolution in education?

I believe it’s a necessary evil. This really started in the 1980s when IBM and Apple started combating to try to capture schools to use their technology. Apple still does it. I see it extensively in remote Alaska when I taught out there. Everybody uses Apple because they can get them cheap or free.

But getting to, I think, what the point of your question is — the danger is, of course, now they’re capturing a consumer class that they’re hoping to exploit for the rest of their lives. And we need to make sure that, to the best of our ability, when we partner with these organizations, the privacy of our children and all of our citizens is protected and that what we use in the classroom is not exploited by these third parties.

While in school, yes. While out of school, no. I do believe in a separation, and civil rights of people in the public space. There has to be a division between the public and the private space and children. You get into some tricky law and I’m not going to get into that, but the rights of the child typically comes through the parents. And regardless of that, we have to respect both the parents, the teachers, everybody — what happens on the school property, the school regulates. What happens outside the school tends to be unregulated.

Now there are some exceptions to that — if somebody is obviously a danger to themselves or others, that’s an extreme circumstance. But in general, if somebody is doing something off campus, the school board has an interest, but a very limited interest in that.

I’ve participated in actually looking at it and putting it together and I’m for it 100 percent. Does that mean it’s a perfect curriculum? There’s never a perfect curriculum. There’s going to be some kids that thrive in it and some kids that do not, but I think it’s a better curriculum. And I think it better prepares kids for college and career readiness, which is the ultimate ends to education, is to either have them able to get a higher education or enter the workforce and also be a trained citizen.

That’s a very difficult question for me. I played basketball, football and golf for my middle school and then also my high school. I love sports and I think they’re very valuable, but the economics that we’re looking at here in Alaska are astronomical. Sports in the Lower 48 — you’re talking about a $500 bus rental to take you to the next neighboring town. Here we’re talking about $300-$400 per student to fly them elsewhere.

When cuts to education are coming, we have to make choices and I’ll have to admit that my first choice would not be activities, but at the same time we should also find sustainable alternatives. One of the things funding activities does is it counts toward your cap. So why don’t we take these off the school budget, try to create a nonprofit and maybe actually create clubs through the city or through a nonprofit where we can actually have sustainable, engaged student activities?

(We could have them) off of the school budget where we can maximize the cap toward education, and then get private corporate sponsors and private citizens who can then invest in a 501(c)(3) that can give a tax deduction. And then (we’d) have sports actually thrive, because right now we have the worst of both worlds. We’ve got severe cuts with no alternative locally in which to participate.

I would at least like to see a local club scene or something that can develop in order to have the participation. Then also maybe we can also engage some of the local communities, but in a more limited role. Ketchikan, Sitka, of course, will always be our rivals and maybe we can afford one or two trips.

No, I don’t. I think it should actually be mandatory and a grade that’s in your health class at least. And I believe it also, depending on the subject, should be extended to even history or biology classes, for example, as appropriate subjects can be integrated in.

I’m not for, of course, making this a major thing in school, but it is extremely important to have kids taught honestly and directly about human sexuality in a non-scarring way so that they are educated and confident in becoming adults in their own sexual identity. It’s important for them to know what their alternatives are if they are one of the people that are actually sexually abused or have issues that they need to speak to somebody about.

Two things that I also want to say — abstinence-only education does not work. I will never support abstinence-only education. I might support abstinence as an integrated role into it, but I even frown upon that. True sexual education is knowing how your body functions. Everybody can abstain if they want, but nobody is born knowing the consequences of sex and knowing how to protect yourself, and that’s the role of schools and the state interest in sexual education as well.

That’s very tricky because I’m not sure that’s actually a school issue. I think that’s actually an economic issue. We have a very homogenous economy, not just in Juneau, but in Alaska in general. Until we can develop a broader economic foundation within Juneau, it’s going to be hard to keep those people.

However, we do have something that I think we underutilize and that is, we are the seat of government. You can be a regulator in any industry that you want to be and basically sit here in Juneau and do it. I don’t think a lot of people really appreciate the opportunities that the seat of government provides and I would like to see us expand our relationship with the state.

I would like to see both the high school and the college system — even though that’s not something I’d be part of — really partner with the state in order to have more internships, more experiences, and really increase the career awareness there. But I also would like to see more opportunities for students to have an understanding of bureaucracy.

By teaming up with the state and having internships and a way for the state to recognize internships as real experience that applies toward your first job toward the state, it also teaches you about bureaucracy. Really that’s where the rubber meets the road in government. We all talk about politics, but it’s the bureaucracy that actually sets the rules and implements policy. So learning that as an educational role as well as a future possible career choice.