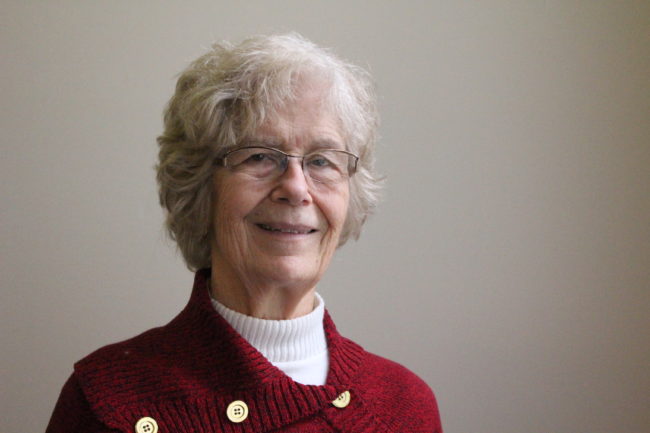 Previous government or other relevant experience: Appointed by Gov. Tony Knowles to the state board of licensed marriage and family therapy

Would you support a plastic bag ban? Yes.

Have you ever smoked or consumed pot? No.

How did you vote the ballot initiative to legalize marijuana? Yes.

How’d you vote on the minimum wage initiative? Yes.

Who did you vote for in the governor’s race? Bill Walker

What’s on your iTunes playlist? I don’t have an iTunes playlist or a cell phone. I listen to KRNN pretty much around the clock. I have a huge LP collection. I’m a Frank Sinatra fan.

One thing that’s really important and that I’ve worked on over time is to keep the capital here. And to keep the regular and special sessions of the legislature here. And there’s been a lot of state money that’s gone to the leasing of the building up in Anchorage. And they are now considering doing something different about that. But I think that having the help of our legislators to advocate for the capital here in Juneau is critically important. And I think the number of retired government employees here in Juneau is huge.

One of the things I bring to the assembly, I think, would be the perception of seniors who are a growing population. They’re talking about in just a few years, it being about 20 percent of the population in Juneau. So persons that are on pensions may have an income that is helpful. There may be others that need various kinds of support in housing, health care or transportation.

I came from California where food is tax-free. And there has been talk on assembly, particularly by Loren Jones, about trying to have food be exempt for everyone in terms of taxes. But that would need to be a whole separate issue from the seniors sale tax exemption, for example. And I do not support increasing sales taxes, which some candidates have recommended. And I think that’s a tax that hits low and moderate-income persons the most because most of our expenditures are for living expenses.

And so I think that’s very important that be attended to and that maybe other options in terms of revenue be looked into, including other taxes and grants that might be available and the (Alaska) Community Foundation which is a source of program support and other sources besides increased sales tax.

Looking at the national news on a regular basis, I think that body cameras are helpful both in terms of officer safety and public safety and consistency with the use of them is critical.

As a substance abuse counselor, I’ve seen an increase in heroin use, sales and addiction which is pretty serious. And I think there needs to be more programs for persons who have an addiction problem, and I think there may need to be more follow-up on any information people might provide. Very often, families don’t report when they have a (family) member that’s using. I’ve run into that.

Also, there have been some clients that contacted me that have been suicidal because of their addiction. So I think health and social services and support are really critical.

I think that downtown, that stores that would carry some products. I think some kind of a club situation where visitors could come and it would be like a bar, in terms of not having food service and so forth, and being limited to adults that could be available. And that would also be a source of tax revenue that would be significant for Juneau, I think.

In terms of zoning and residential areas and so forth, there’s a lot of work being done by the state and Loren Jones is on the (state marijuana control) board. And the assembly has recently extended the deadline for determining what action they would take and really making a big pitch for local decision making about that.

I would say something that could definitely be improved and supported, that hasn’t been to the degree I think is needed, is public bus transportation out to the Lemon Creek area so that employees who work at Costco or Home Depot or out in that direction would have a way of getting to work on Sundays. And I’ve talked to bus drivers in the past, and they are totally supportive of working on holidays, but both Care-A-Van and Capital Transit don’t provide enough transportation as meet the needs.

There was recently a decision by the property owner of the Nugget Mall to have people parking their cars and catching the bus from there, and there was such an outcry from the public that the assembly pressed for that and went back to the original decision. And I think that sort of thing and a circulator downtown to provide transportation and relieve congestion and pollution would be a big thing.

And keeping the sidewalks and approaches to bus stops clear of ice so that seniors that depend on public transportation would be safe.

I think development and redevelopment of downtown Juneau, particularly the historic district, so there would be more housing, mixed business and housing. And there wouldn’t be so many closed up buildings in such a large portion of the year. And the Willoughby District also. And higher density property zoned in Douglas.

All of those things could be developed or redeveloped to a larger extent because there’s such valuable properties and the taxes would be really high that would be a very significant contribution to revenue for the CBJ budget.

Well, I was supportive of eminent domain as legal action to take against the property owners of the Gastineau Apartments because they were totally not responsible in using any of their insurance money to do anything about the building. And I know the assembly decided not to do that but to have a lien against them and a proposal for bids for contractors.

I think that the delays are not good. And I think buildings that are not only an eyesore to the neighborhoods but unsafe in terms of attracting homeless people and possibility of more fire and damage is very problematic and economic development of any of those places is a much more positive action to take.

Having mixed housing downtown is a way of expanding the housing opportunities. There are a lot of things that the city could do in terms of its own land as they did at Lena Point. Putting it up for bid and having persons develop it for housing. There’s also other ways in terms of private property owners and there’s a major one on Atlin Drive.

As a member of the Juneau Commission on Aging, we’ve been really trying hard to get housing that was within walking distance of stores and other resources to have it be a walkable community. And so some sort of enticements of one sort or another, tax credits in some way or other things that might encourage the private property owners in Juneau to contribute or to build housing, would be a plus. I think for seniors and young families housing is a major issue, and I’m very supportive of looking for all sorts of different ideas. And I think think looking outside of the box is one way to go for sure.

I think that could be a disaster if that passes, and I think that Juneau has been really good about, practically every budget year, providing the maximum amount of fiscal (and) financial support for our schools and that should continue. Luckily, our state legislators and Democratic caucus stood their ground, in terms of the state budget process, to get increased educational funding so I think that’s one of the very top city, state and federal priorities.