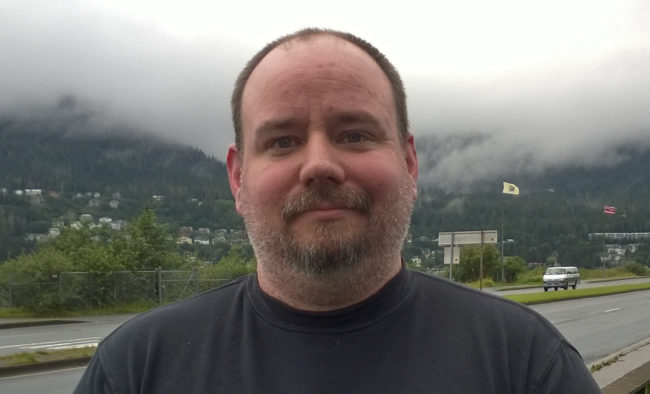 Would you support a plastic bag ban? No.

How did you vote the ballot initiative to legalize marijuana? Yes.

How’d you vote on the minimum wage initiative? Yes.

What’s on your iTunes playlist? If I had to put something on my iTunes playlist, it would probably be a lot of comedy stuff. Like, I like to listen to Jim Gaffigan and things like that just ’cause all the serious stuff going on in the world, it’s good to have a laugh every once in a while.

Well, there’s a lot of things that make up the state budget crisis. One of the big things we have to look at right now is oil. Oil right now is $46 dollars a barrel, roughly. There are some economist that say it’s going to go down as low as $20. I’m thinking closer to $30. Maybe at the low end. But that’s really going to affect our economy.

So if we lose those state jobs due to lack of funds, we need to make up for it in other ways. We need to diversity the types of businesses we have in Juneau. We can’t be that one-trick pony that is just state and tourism for major income sources. So we need to make sure we start make sure we diversify the types business we have here, ensure that small businesses will grow, hire more employees so it kind of offsets that balance.

I don’t think as a whole it should exempt it. Right now, because I talk a lot to Debbie White. And right now, they’re about to vote on the sales tax exemption for seniors so like low-income seniors will still be exempt on food, heating oil, things along those lines. I think they could bring some of that to lower-income families. But again, if you cut that, you have to make up for it somewhere else. So we want to make sure that we’re preserving the important things like school, fire, police, medical. So there’s a lot of things we could move around in the budget to make it a little friendlier for people.

But I think overall the people of Juneau, income-wise, are over and above the national standards. But still, the cost of living is really high. So I think at this point and time we should see what the senior tax cuts do for the tax revenue and then go from there. We don’t want to cut too much all at once.

Police are very important in our society. And a lot has been in the news about other areas where police have had issues where, you know, the whole Michael Brown thing. And I’ve met a lot of the police in Juneau. They’re amazing men and women that work in Juneau. I think it’s just a backup more towards making sure that they know they’re protected in case something happens and also making sure the people that they’re investigating are protected.

I highly doubt we’re ever going to have a Michael Brown situation here in Juneau but there could be the assumption of something went wrong and by them having the body camera, I think that backs up their story and will help them if anything ever happens.

Unfortunately, drugs are a problem in every city. Juneau is a little higher due to the big heroin issue that we have here. It’s really hard to get to a point where you can control an epidemic like that. Education is a big thing. There should be drug education in the schools, there should be programs that people can go into that are local.

We have Rainforest (Recovery) right now, but there should be more options for people locally for drug treatment. Also, you know, the police here are amazing. While they’re trying to stop the drug use, they still treat the drug users as people which is a very important aspect. I think between education and optional and different  programs for different drug users, I think would be a good step in the right direction.

Well, there’s a couple of things. First: the distance from schools or daycares. You know, that’s something they definitely have to talk about. Right now, I believe it’s either 2 or 500 feet from any type of area where children are, which is a good start. But also you have to look at the plot size. They’re talking about for grow facilities, they want D-1 only. And that’s a large plot of land for a growing facility, for a D-1. There could be some smaller D-3 or D-5 depending on where they’re located. But it really depends on the size of the grow facility.

But when it comes to retail, most of the retail honestly is going to be downtown. I think there’s going to be maybe one or two in the valley, just because the population and the amount of tourism. And as long as they’re away from the schools, I’m totally fine with that.

I wouldn’t really say what they’re doing, what they shouldn’t. But there’s stuff that they’re doing that they should shift. Like for example, the whole thing with the whale statue: Building the $12 million dollar park to house that whale for the tourists. I think that head tax money could be used in a lot of different ways that would not only help the tourist, but it could also help the people that live here, like work on the downtown congestion.

You know, work on making sure we’re keeping business in year-round because we don’t only have tourists for a certain amount of time. We have tourists that come in year-round. So make sure we keep downtown vibrant for year-round. Use some of that money to tear down the Gastineau Apartments because that’s a tourist eyesore. That’s one of the first things you see and smell when you come into downtown by Pocket Park. They’re not doing it wrong but they could shift the focus–not to building new but revamping what we have.

I think the city right now is doing a decent job on ensuring that the basic needs are taken care of. One thing that I would’ve really liked to see, and I would like to facilitate if I became an assembly member is make it easier for business to get started and get going. When I started my small business, it was a pain to even get a sink installed. I mean, the permitting process took almost two months. And I think cutting some of that red tape would make it easier for the small business owner and more feasible from them to start up and I think that would help grow business in town.

I think it really depends on the severity of the blight. Gastineau Apartments have to go. I mean, they’ve burned down two times since I’ve been here. And so something like that has to go. It’s an eyesore. You know, other buildings, yeah they’re old and they need to be refurbished. And the city can help or aid the people in refurbishing them, but I really think it depends on the situation. Sometimes you have to use a carrot, sometimes you have to use a stick.

Well, the zoning codes they’ve done some big changes with that. There’s the subdivision ordinance that went though not so long ago, which is really going to help build some of those communities.

But I think we really need to focus on smaller type homes, starter type homes, change some of the zoning areas. Because if you have a D-1 or D-3, you can only build one to three homes on that plot of land. We could separate them to even a D-5 or D-8 and we could build smaller, more family-friendly homes that would be more affordable for the family starting out.

Then if we have more of those, then that would help some of our housing problem. And also, they should definitely try to revamp some of the downtown housing because a lot of those apartments go unused for the majority of the year.

It’s kind of a double-edged sword. If we say, “Hey, local government should not have to contribute,” then we’re going to cut that funding for the schools because the state isn’t going to have the money, especially with the oil price situation. They’re going to spend it on other stuff.  And schooling unfortunately will not get it.

So I think it’s our community, and we all need to do our part to ensure that our students have a good future. So I think they shouldn’t mandate it, but I think that every community, if you actually asked the people who have kids in schools, the kids themselves, the teachers, you know, everybody that’s growing up in the community would want to fund the schools.