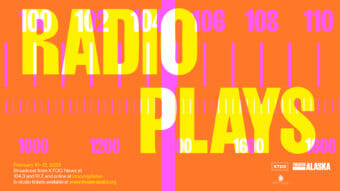 We’re so excited to present our first ever Radio Theater Festival!

Three of the four plays in the festival will be performed live in the studio at KTOO and broadcast simultaneously at 104.3 and 91.7.

Tickets to the live studio performances

Friday, February 10 @ 7pm – Encore presentation of Juneau Ghost Light Theatre’s production of Dracula – Broadcast from KTOO News at 104.3 and 91.7, and online at ktoo.org/listen.

The Beginning of Eagle – Adapted by Vera Starbard from stories shared  by DaaXKu dein Tommy Jimmie
Post-show discussion of The Beginning of Eagle for the in-studio audience only
Broadcast from KTOO News at 104.3 and 91.7, and online at ktoo.org/listen.
Presented live in studio at KTOO. In studio tickets: $20.

The Case of the Careless Client by Agatha Christie and performed by Juneau Ghost Light Theatre
Broadcast from KTOO News at 104.3 and 91.7, and online at ktoo.org/listen.
Presented live in studio at KTOO. In studio tickets: $20.

FUNDERS
A huge thank you goes to our festival funders:
Alaska State Council on the Arts and the National Endowment for the Arts with additional funding from the Rasmuson Foundation
The Juneau Arts and Humanities Council and the City and Borough of Juneau
Sealaska

Additional funding support for the writers comes from The Central Council of the Tlingit and Haida Indian Tribes of Alaska.