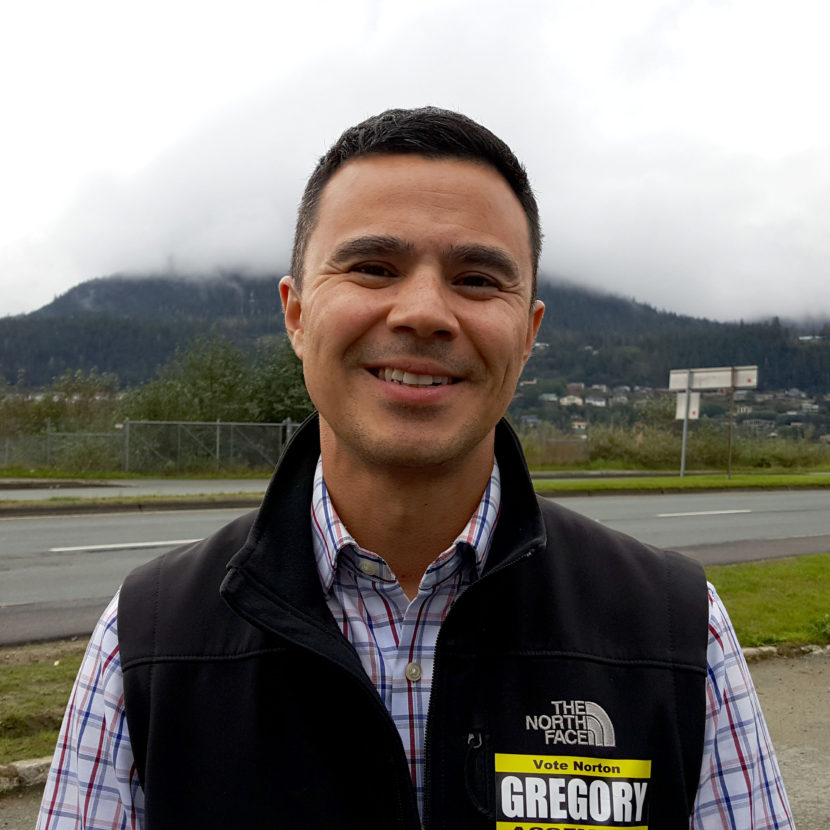 Highest level of education: Studied business management at the University of Alaska Southeast

Who are you voting for in the presidential election?  Hillary Clinton

Are you for or against building the road? I’m pro-road.

Salmonberries or blueberries? Oh my gosh, blueberries! Blueberries, that’s if I can get them back into the house before I eat them all, but blueberry pie is great, blueberries on type of your ice cream is great and you know it’s always fun to make a batch of blueberry wine.

Well you know, the city right now is locked into their current fiscal plan for the next year and so luckily we have savings that we can draw from, and it’s a great solution for our current deficit this year, but as we move forward in the long term we need to look at other ways to raise revenue for the City and Borough of Juneau.

I’m going to be voting no on the 3 percent sales tax to make it permanent. The reason I’m going to vote no is that given the state of the state budget, we don’t know what’s coming down the pike. However in talking with other elected officials in the legislature, it sounds like there might be a state tax coming, a state sales tax. And so we want to make sure that we leave our temporary sales tax as a temporary tax. We want to make sure the voters have the authority to decide what is taxed or how much is taxed and what we do with that money.

You know I believe that when we voted for the ordinance regarding marijuana that we said that we would treat marijuana just like alcohol and therefor the taxes should be the same.

Juneau has an opioid addiction problem. What role should the city have in combatting it?

You know, there are a lot of good people out working to tackle the opioid problem in our community, and I think the City and Borough of Juneau officials should continue to support the good work that’s already been done by other groups in towns, such as Juneau — Stop Heroin, Start Talking and continue that dialogue with those folks and build on the good work that those folks have already completed.

Well a big part of what I do is housing. I’m the housing services manager for Tlingit-Haida Regional Housing Authority and I also serve on the Juneau Affordable Housing Commission and I also serve on the Juneau Senior Assisted Living Task Force. When it comes down to our economy, when we look at the Juneau Economic Plan, it states that one of the primary restrictions on our economy growing is housing. So we need to make sure that we have a plentiful supply of housing, especially workforce housing for those young families and individuals who are looking to get established in the community and are looking to start building some equity. And so we need to make sure we have housing available for those folks to live in. We want to make sure that we draw young folks back to Juneau and make sure that they can afford to live here. And so at the core — what goes on with our economy — it all comes down to housing.

You know, my take on the lawsuit is that the City and Borough of Juneau recently came out of a state audit where they came in to make sure we were spending our money per the state law, and Juneau passed the audit with flying colors. I believe it was a nice, clean audit, which means that, you know, we haven’t done anything wrong. So I think we need to stay on that track and as long as we’re doing what we’re supposed to be doing, we should be just fine.

I don’t think it should change. I think that we really have some bigger issues to deal with in our community and that there was a little bit of noise about fireworks after the Fourth of July. In my neighborhood, I live over Douglas on Fifth Street, and I haven’t heard fireworks in quite some time. I can understand why some folks would have been agitated with the fireworks; there are some folks out there that are sensitive to noise and people that have pets certainly take issue to that. But at the end of the day, when I look at what’s going on in my neighborhood, I just don’t hear fireworks anymore, and I think that if people are responsible with them, they can self-regulate. Keep those things put away in the closet until Fourth of July or New Year’s, folks. Put ’em away. Don’t bring them out until then.

A little about what I’ve done to prepare for the Juneau Assembly is I attend the assembly meetings when possible, I listen to them on the radio, but in addition, I get out and talk to folks in our community to find out what their issues are and try to gain a better understanding of what’s important to the voters. In addition to that, I’ve put a lot of work and time in on the housing issues in our community. As I mentioned early, I serve Juneau Affordable Housing Commission — it’s a commission of the City and Borough of Juneau that advises and provides suggestions to the assembly. Some of the work that we’ve done at the Affordable Housing Commission is, last year, we put forward a Juneau Accessory Apartment Program, which helps folks to build an accessory apartment on their home and they would get a … $6,000 rebate from the government. It helps to incentivize housing in our community. So just getting involved with some of the big issues that are going on in our community.

I also serve on the Juneau Assisted Living Task Force. That task force is charged with building assisted living in our community, and so looking forward to the next 15 to 20 years, Juneau has right now the fastest aging population in the country, or at least the Southeast region does. So we’re going to have more people in the next 15 to 20 years that are age 65 and older than anywhere else in the country per capita. So we need to be planning as to how we’re going to take care of these folks and how we’re going to keep our seniors here. Our seniors inject $66 million into our local economy annually, and they also are a very large group of volunteers. And those groups of volunteers take care of children after school. We’ve had a daycare shortage, that problem is easing up, but there’s still some work to be done there. We want to make sure that we keep those seniors here. So in preparing for the next 15 to 20 years in dealing with some of these real life challenges that we have in our community, we’re working on building assisted living in Juneau. Right now there’s a plan to build 88 units of assisted living out by Safeway, in the Vintage Park area. The name of that project is going to be Riverview. I’m proud to be serving on the task force with the other folks from the Assisted Living Task Force, and we just need to keep plugging away there.

In addition, at the Affordable Housing Commission level, we put forward a proposal to the assembly between the years of 2012 and 2014 showing that we need a housing action plan, we need a road map for our community and for the builders in our community to understand what type of housing we need in our community and how many houses we need, and also really trying to understand our housing problem in this community. As many of us know, Juneau has the highest cost of living, and our housing prices are also quite high we have a high demand and not a lot of supply. We’re working at trying to figure that problem out. It comes back to creating starter homes for families and individuals that are looking to get established in our community, and making sure that they have some place affordable to live, because again that ties back to our economy. So if you don’t have affordable housing, it’s likely that you’re going to be having folks moving out of town where it’s more affordable. So it’s trying to keep people here in our community, trying to incentivize growth in our community and new economy and really trying to make Juneau the best community that it can be.