In the summer of 2019, KTOO commissioned a source audit, or a report on the make-up of the sources we use for KTOO news stories and the guests we have on Juneau Afternoon.

Last October, we started asking everyone who appeared in a news story or was a guest on Juneau Afternoon to identify their gender and race and/or ethnicity.

Here’s what our first report in late 2019 revealed about who we’ve been interviewing. And here’s what the first quarter of 2020 showed us.

We’ve just finished compiling our third report, which reflects a period in which the COVID-19 pandemic was wholly present in Alaska.

Our goal here is obvious: include more female and non-binary voices. And it appears that we’re moving in the wrong direction. 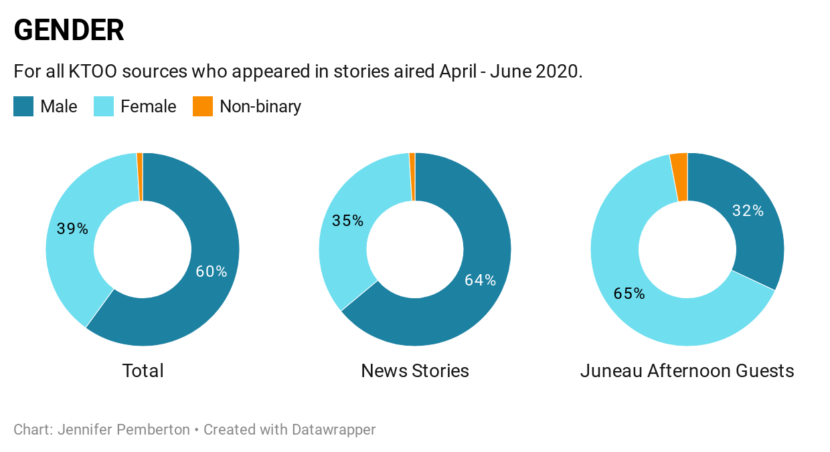 One thing to consider is that in June, Juneau Afternoon went to a summer schedule with fewer programs and fewer guests. That program consistently has more female guests and balances out the news team’s tendency to interview more males.

To understand the difference between the guests on Juneau Afternoon and sources for news stories, it’s helpful to look at the subject experts we’re inviting to speak with us.

For news stories we talk to a lot of government officials, while Juneau Afternoon guests tend to be from the non-profit sector or artists or educators.

One trend I’m particularly interested in is the percentage of “general public” we include on our airwaves, especially since we know there’s an equal opportunity to talk to a man or a woman when things like expertise, educational background or profession don’t dictate why we’re talking to someone. For both Juneau Afternoon and our news stories, this is trending up — which is a result of an intentional effort to talk to more “regular people” about the pandemic and how it is impacting our community.

While 69% of Juneau’s residents identify as white-only, 79% of KTOO’s total sources for the past three months were white-only. And over the past nine months, the percentage of white-only sources in our coverage hasn’t changed much. (When we looked at this data in December, 75% of sources were white-only; in March, that number was 77%). 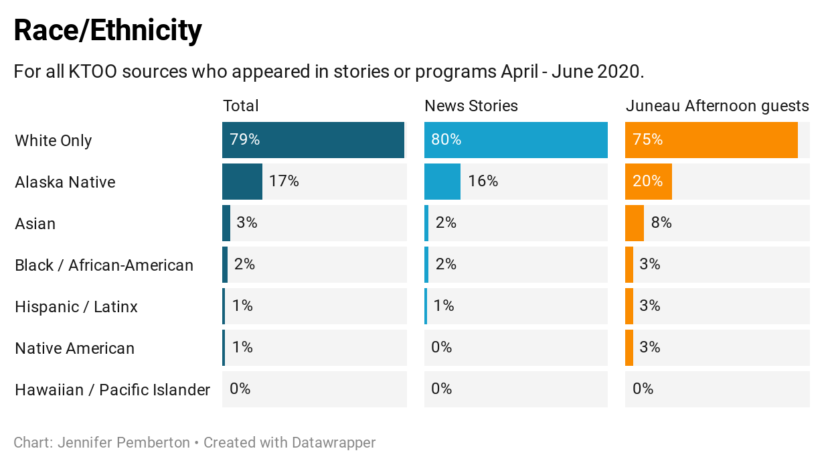 The two groups we have actively been trying to hear more from are people who identify as Alaska Native and Asian. If the goal is to reflect our community, these numbers should be 18% and 10% respectively. In total, we’re not there yet, but the make-up of Juneau Afternoon guests got very close (20% Alaska Native and 8% Asian).

One important factor we look at when we look at the racial and ethnic make-up of our sources is the focus of the story. The mix changes when the story or program has a focus on race.

Not surprisingly, stories that are not about race skew whiter than stories that address race. But this is not what we want our coverage to look like. We want a wide diversity of voices in every story we tell and every topic we cover. 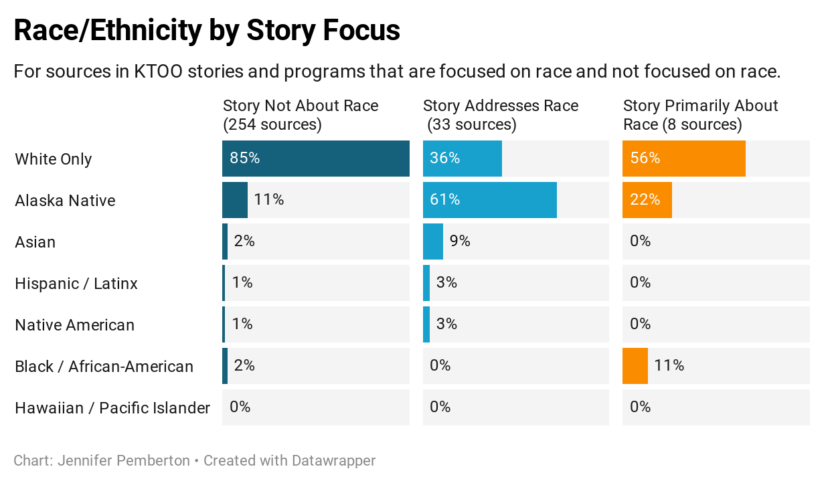 One thing we did see in the last three months was an increase in stories and programs that were focused on race. In the last report, we only talked to two sources for stories that were primarily about race; for this reporting period, there were eight.

Documenting this information about our sources for these past nine months has been a mostly observational exercise. “Tracking our sources” (which isn’t as big brother as it sounds) is just holding up a mirror to our coverage so what we see is a true reflection of the everyday decisions we make when we decide to interview someone.

So far we haven’t been prescriptive about trying to change things. We know in general what we need to do but we haven’t decided on what levers to start pulling to try and start moving things around. That’s about to change. Without making a concerted effort to include more women and non-binary voices and more Black, Indigenous and Asian perspectives and experiences in our stories, we can’t expect these numbers to change.

This is our newsroom mission, which feels very aspirational right now:

Relying on voices, perspectives and stories historically underserved by news outlets, KTOO News provides information our community needs to gain a deeper understanding of ourselves and our role in local, statewide and national issues and events.

Here are some stories and programs from the past three months where I feel like we have kept our mission in our sights. Hopefully we’ll have more of these to share at the end of the next quarter and we’ll see our numbers start to shift.