KTOO strives to be inclusive and diverse in our coverage. Part of our newsroom’s mission is to “consciously seek out the voices, perspectives and stories not found in other news outlets.” In order to ensure that we’re doing our best to reflect the variety of lived experiences we know exist in our community, we are asking everyone we interview for a news story or on Juneau Afternoon their gender, their race or ethnicity and their date of birth. Answering these questions is voluntary, but there’s no way we can track our progress without asking.

We started this work by conducting a “source audit” — it’s like a snapshot of our inclusivity. We looked at six months’ worth of stories and segments broadcast over our airwaves from January 1 – June 30, 2019.

Here’s what our sources over that period looked like:

While just 69% of Juneau community members identify as being white only, 84% of KTOO’s sources over the survey period identify as white only.

Our source audit showed that two-thirds of the interview subjects used in our news stories are male and one-third are female.

Guests on Juneau Afternoon are flipped: almost two-thirds (64%) are female and just over one-third are male.

There was one Juneau Afternoon guest and one news source who identified as non-binary.

Some aspects of source gender is out of our control. For instance, Gov. Mike Dunleavy is a male and he was the single most interviewed source during the surveyed period (29 times). But if we want the voices and perspectives on our airwaves to reflect the community we live in, we could try to get this closer to what Juneau looks like, which is 51% male and 49% female.

We also took a look at the expertise areas of everyone we interviewed. For the news stories, the most people we talked to, by far, were elected officials (35%) and government spokespersons (16%), followed by members of the general public (11%) — most of whom were individuals testifying before the Alaska Legislature during the session or reacting to legislation under consideration. 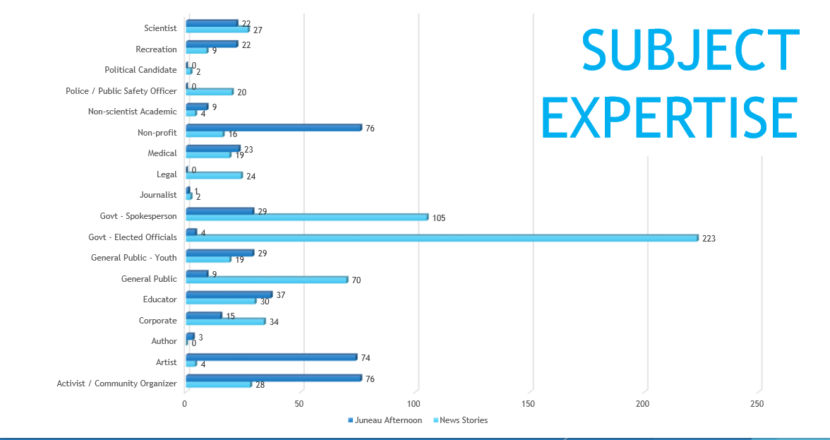 For Juneau Afternoon, guests most often represent non-profits or are activists / community organizers or artists.

We are asking everyone we put on the radio about their gender, race and /or ethnicity and age. This makes our goal of being inclusive and diverse part of our daily work.

We are also intentionally reaching out to people we haven’t talked to before and introducing KTOO, our news team and everything we do to more and more members of our community.

We’ll chart our progress and publish it for you here on a quarterly basis so you know exactly how we’re doing and how we’re deciding what and who to cover.

A Note on Methodology
We commissioned Rain Coast Data to perform our source audit.

Ethnicity was measured using the same demographic breakouts employed for the 2013-2017 American Community Survey 5-Year Estimates, in order to accurately compare and contrast audit results to current demographic information. Respondents were able to list up to three ethnicities during the survey. Questions involving gender contained three options: Male, Female and Non-binary. Sources were placed in age groupings based on generation.