In the summer of 2019, KTOO commissioned a source audit, or a report on the make-up of the sources we use for KTOO news stories and the guests we have on Juneau Afternoon. The period between January through June of 2019 became our baseline data, because it was the first time we had looked at the demographics of the people whose voices we hear on the air.

In October of 2019, we started asking everyone who appeared in a news story or was a guest on Juneau Afternoon to identify their gender and race and/or ethnicity. You can read what our first report from the last quarter of 2019 revealed about who we’ve been interviewing.

In total, we had more female sources (54%) than male (46%). There were no sources in the reporting period who identify as non-binary. 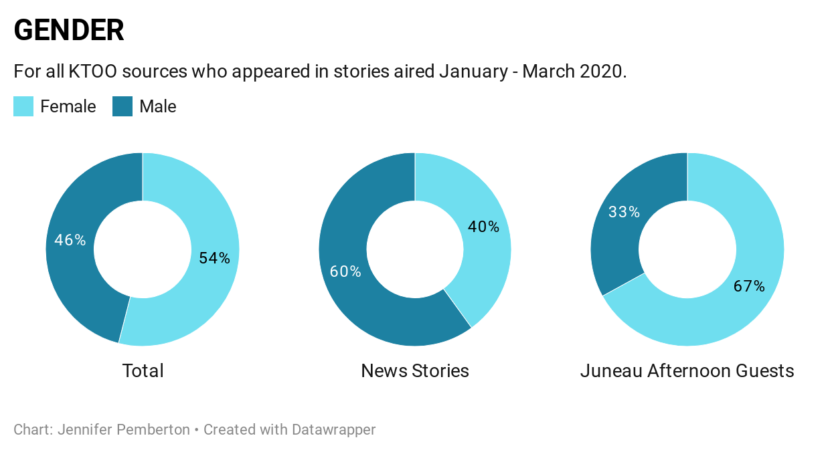 While 69% of Juneau’s residents identify as white-only, 77% of KTOO’s total sources for the past 3 months were white-only.

The two groups we have actively been trying to hear more from are people who identify as Alaska Native and Asian. If the goal is to reflect our community, these numbers should be 18% and 10% respectively. We didn’t achieve that in this quarter. In fact, we got further away from that goal than we were at the end of 2019 (Q4 had 17% Alaska Native sources and 4.5% Asian sources).

Sources for news stories and guests on Juneau Afternoon tracked similarly when it comes to race and ethnicity. 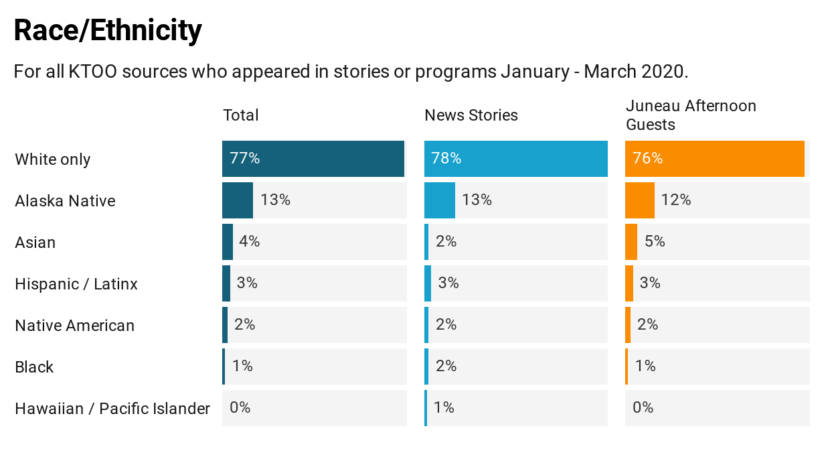 One important factor we look at when we look at the racial and ethnic make-up of our sources is the focus of the story. The mix changes when the story or program has a focus on race.

Not surprisingly stories that are not about race skew whiter than stories that address race. But this is not what we want our coverage to look like. We want a wide diversity of voices in every story we tell and every topic we cover. 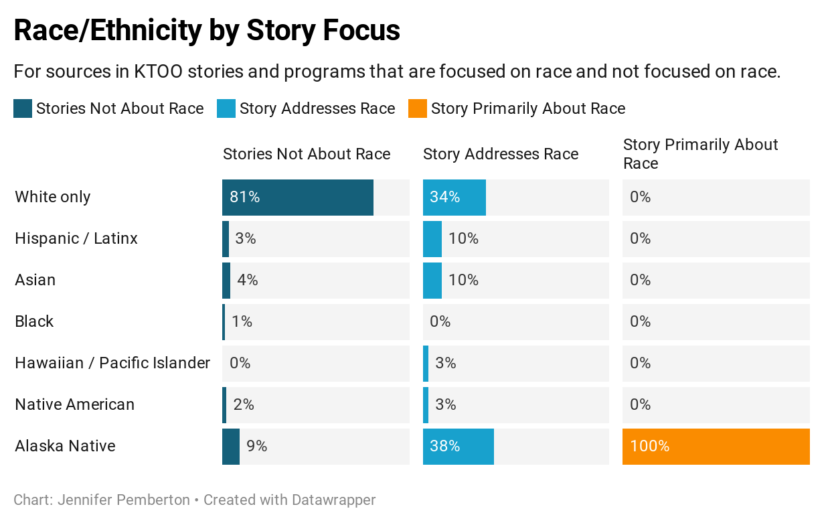 Note: there were only 2 stories or programs this quarter that were primarily about race.

Toward the end of this reporting period, something extraordinary happened that has changed almost everything about what we’re doing here at KTOO: The COVID-19 pandemic came to Alaska in mid-March. The pandemic has changed a few things for KTOO. For one, the volume of news stories we’re producing is up. That means there are more opportunities every day to talk to new people who haven’t been a part of our coverage before.

The conversations on Juneau Afternoon have shifted from promoting events and featuring art and advocacy work to truly building community out of our audience and blurring the lines between listeners and makers through our Community Connections segment.

Perhaps the biggest change the pandemic has brought is the opportunity to focus on the ways the impact of the pandemic exacerbates inequities in our community. We are hearing from people in power every day. Gov. Mike Dunleavy appears almost every night on TV and our website with Chief Medical Officer Anne Zink and other members of his cabinet. Juneau’s city manager Rorie Watt is on the air every morning and afternoon. These addresses bring important information to our audience and are a critical part of our service as a news organization. But for every elected official and authority figure we include, there must be an equal opportunity to hear from the voiceless, the powerless and the people who are disproportionately impacted by the disease and the economic disaster accompanying it: