In the summer of 2019, KTOO commissioned a “source audit,” or a report on the make-up of the sources we use for KTOO news stories and the guests we have on Juneau Afternoon. The period between January through June of 2019 became our “baseline” data, because it was the first time we had looked at the demographics of the people whose voices we hear on the air.

In October of 2019, we started asking everyone who appeared in a news story or was a guest on Juneau Afternoon to identify their gender and race and/or ethnicity. We’ve been doing this for 3 months now, and here’s what that last quarter of 2019 revealed about who we’ve been interviewing.

* Juneau Afternoon numbers are for November and December only. 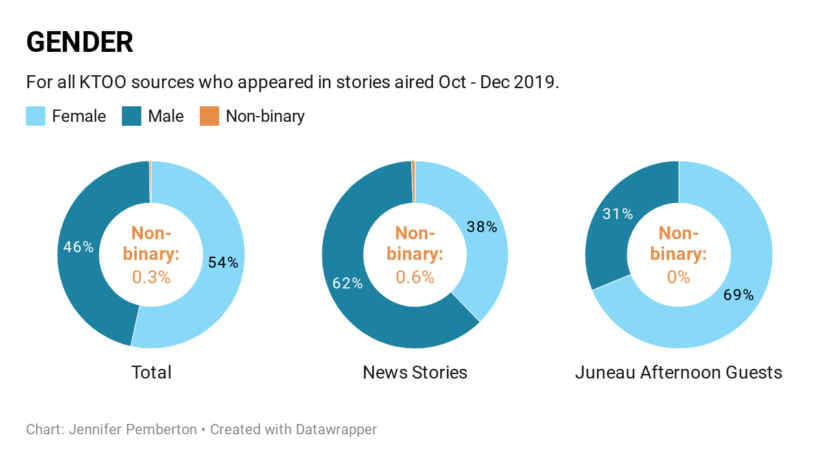 The mix of male and female sources is different for news stories compared with Juneau Afternoon.

Sources in news stories were roughly two-thirds male (62%), while guests on Juneau Afternoon were more than two-thirds female (69%). This is largely because of their differing areas of expertise. In news stories, the people we talked to the most include government officials and spokespersons (29%) as well as people from businesses and industry (12%). A lot of guests on Juneau Afternoon are activists and community organizers (36%) and artists (18%).

One takeaways from this section is that our reporters could be talking to more women for news stories.

While 69% of Juneau residents identify as being white, 75% of KTOO’s sources for the quarter were white. This is closer to reflecting the community than the last survey period (Jan – June 2019), which was 84% white. One difference between the survey periods is that the Alaska legislature was in session during the beginning of the year and white lawmakers and the white governor appeared in stories nearly every single day.

The two groups who have been most under-represented in our coverage are Alaska Natives and Asians.

The population of Juneau is 10% Asian. In the last quarter, 4.5% of our sources identified as Asian: 2% of news sources and 7% of Juneau Afternoon guests. This is an improvement over the six month period we looked at last year, which contained 1% Asian voices.

This isn’t a criticism of our coverage and doesn’t diminish the importance of the the sources we heard from in those stories, but it does show us that we tend to reach out to the Native community for stories or programs that are about the Native community or issues facing Native communities exclusively. It is an important benchmark for me to hear from Native voices when the story isn’t focused on race. The first pie chart in the graphic above is the one that we think needs to look most like the make-up of our community.

We’re still asking everyone we interview to identify their gender and race/ethnicity. We’ll report on the first quarter of 2020 after March 31. That will include the start of the legislative session, where we expect to start hearing from lawmakers daily. We’ll continue to strive to include the voices of everyone in the community we serve despite the shift in focus of the news cycle.

Also, for Juneau Afternoon, one of the things we are looking at is not just who we have on as guests, and in what capacity, but also who is hosting and crafting each show. This quarter we had three individuals of Alaska Native descent as “guest hosts” who also produced the content for that day’s show. We see this as another important step in having our programming better reflect our community and are working on having these individuals, and others, host and produce more regularly.