On Thursday, hundreds of advocates for missing and murdered Indigenous people gathered in front of the Alaska Capitol Building in Juneau.

Most of them wore red. That’s the color of the movement to remember murdered and missing loved ones and to bring awareness to the violence that Native people are 10 times more likely to experience than the rest of the population.

Many had red handprints across their mouths, representing the people who have been silenced by violence.  Drummers and dancers performed the Women’s Warrior Song with members of the crowd joining in.

It was Anne Sears’ first MMIP event since starting her new job. Sears was the first Alaska Native woman to serve as state trooper. She retired late last year, and then in April was appointed to a statewide leadership position tasked with investigating unsolved homicide and missing persons cases involving Alaska’s Indigenous people.

“I have felt like everything that I have done in my life, the 30 years of public service, my time as a state trooper, my growing up in Alaska, being the daughter of an Indigenous woman has all led to this moment,” Sears said.

There are a number of unsolved missing persons cases in Juneau. She said in talking with local law enforcement, Tracy Day’s name keeps coming up. Day is a Lingít woman who went missing in Juneau in February of 2019. Her family and friends have used social media and organizing to draw attention to her case. Sears says she wants to bring new eyes and strategies to the table in cases like Day’s.

“I’ll be making some new inroads in a different way. And I look forward to that and maybe helping some families find closure, I don’t know. But I would like to. I would like to make that a goal,” Sears said.

Events like this march are important to give focus to the cases and shed light on victims’ stories.

“I think it’s super important for the families to know that they have a community behind them,” Sears said.

X̱’unei Lance Twitchell, a language professor at the University of Alaska Southeast, spoke to the lived reality of Alaska Native people experiencing violence.

Twitchell has a wife and young children. He worries about his wife’s safety alone at night.

“Who has to walk the dog at night?” he asked.“I do because I know what will happen. I know there’s a chance and there’s a risk and that’s not what I want.”

Twitchell said that making a change won’t be passive or easy.

“But to make a new day you have to make a bold move. That means naming what has happened, creating a shift that is real and that has increased accountability, less violence, and that people know we are the human beings of this place,” he said.

The group marched to Elizabeth Peratrovich Hall, accompanied by drummers. There was a whole slate of speakers planned for the evening and a shared meal.

Anne Sears said that she hopes people will continue to care about missing and murdered indigenous people every day of the year. 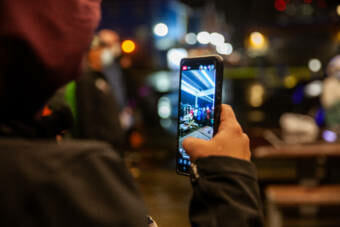 For moderators of a Facebook group for Juneau's missing people, it’s personal

The group’s moderators are people who've lost loved ones themselves. Their work with the group means they’ve had to make tough choices while processing their own losses. 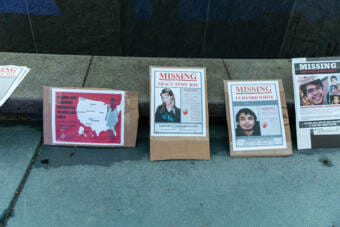 Juneau police are looking for feedback on the new page, which has photos and descriptions of missing people and details about when they were last seen.