In this newscast: The Glory Hall’s affordable housing project got a boost Tuesday when it successfully appealed a city permit denial; There’s a renewed push for the city  to redevelop Telephone Hill, which is owned by the state and home to historic Juneau houses; Three people were critically injured in a small plane crash near Yakutat on Tuesday, and a fourth was treated for minor injuries; Flights to the Lower 48 are increasing in demand and cost again

In this newscast:  A Petersburg nurse was recognized nationally with the Daisy Award; Haines formline artist James Hart will apprentice with several master Lingit and Haida artists; Two years after becoming on of the most sealed off locations in the U.S., St. Paul Island is reopening to visitors; ConocoPhillips Alaska has started oil production at a satellite reservoir of its Alpine field

In this newscast: A Miami man drowned in Skagway Friday afternoon; Juneau’s Meals on Wheels program is struggling to find enough volunteers; Young tribal citizens in Sitka took part in an afternoon regalia workshop in preparation for Celebration; The status of the Mt. Edgecumbe volcano has changed from “dormant” to “historically active”; Governor Mike Dunleavy has announced his choice of running mate, Corrections Commissioner Nancy Dahlstrom 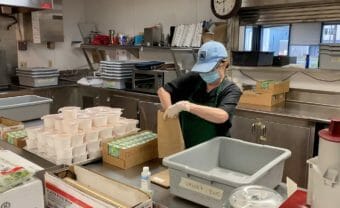 In this newscast: Hundreds of hours of audio from the retired Southeast Native Radio are now archived online; Dolena Fox is one of the world’s first female Yup’ik commercial pilots

In this newscast: The Juneau Assembly’s annual budget debate is winding down, but it still hasn’t decided what to do about exempting food from sales tax; Around 5,000 people are expected to come to Juneau in August for an Ironman race, and the city is encouraging residents to rent their homes and go on vacation for the week; Juneau’s two public high schools saw an increase in new COVID-19 cases following their proms

In this newscast: The U.S. Forest Service will begin a restoration project on Zarembo Island, but first, they need to clear some cars out of the way; A bill that rewrites alcohol restrictions cleared the Alaska Legislature this week; Denali National Park received the most snow in 99 years this winter

In this newscast: Two bills that would tighten PFAS regulations are stalled in committee, and activists are worried; The cruise industry and Pacific Northwest ports announced that they are working to try and eliminate gas emissions from cruising in the region; Demonstrators gathered on Ketchikan’s cruise ship docks on Saturday to show support for abortion rights; The U.S. Coast Guard searched for an overboard cruise ship passenger today