In the summer of 2019, KTOO commissioned a source audit or a report on the demographics of the people we talk to for KTOO news stories and the guests we have on Juneau Afternoon.

Last October, we started asking everyone who appeared in a news story or was a guest on Juneau Afternoon to identify their gender and race and/or ethnicity.

Here’s what our first report in late 2019 revealed about who we’ve been interviewing. And here’s what 2020 has looked like so far: first quarter (January – March) and second quarter (April – June).

We’ve just finished compiling our third-quarter report, which includes reporting from our “new normal” pandemic life and the ramp-up to the 2020 election.

We did it! We reached gender equality. Well, not really, but our sources were split evenly between men and women for the first time since we started keeping track.

Look at the difference between news sources and Juneau Afternoon guests. This quarter is actually the best showing we’ve had for female sources in news stories: that 43% has been more like one-third in previous reports. And of the Juneau Afternoon who responded to the question, a whopping 80% were women. 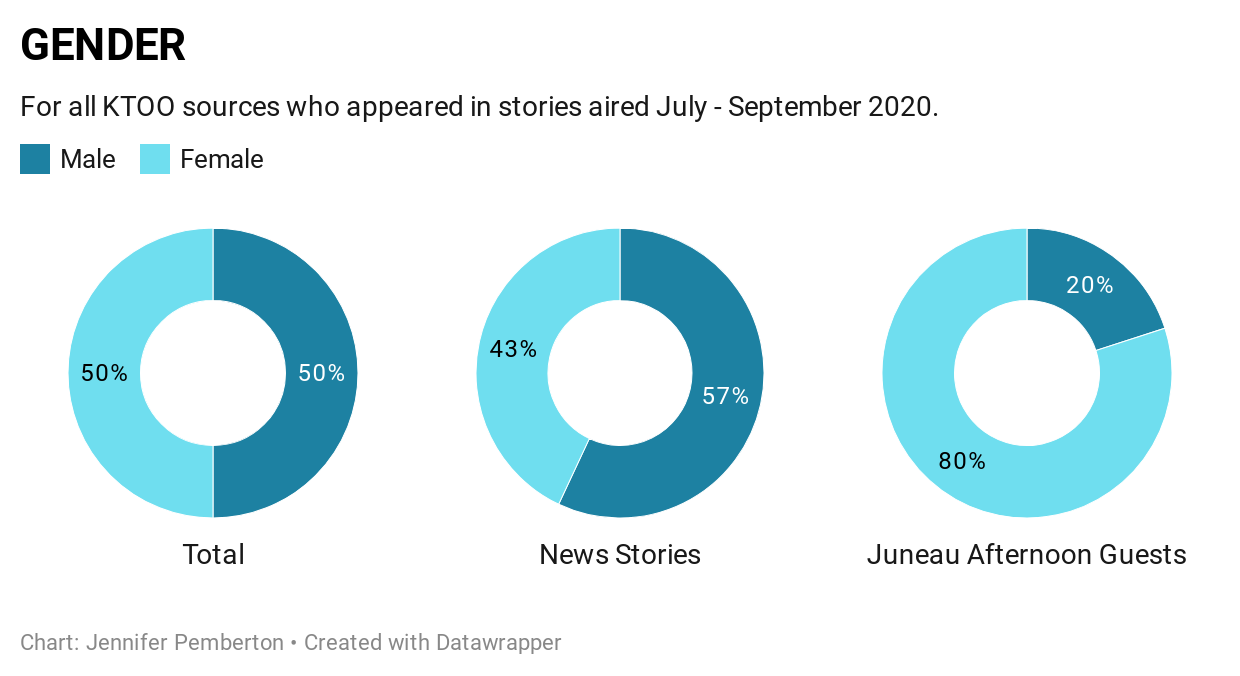 We always look at subject matter expertise at this point because it helps clarify some of the gender numbers. Half of Juneau Afternoon guests for the quarter were non-expert members of the general public. This means they weren’t representing an organization or promoting an event. They are just normal people talking on our daily community program about their lives. But given that, it is puzzling to me that 80% of the show’s guests were women.

Considering that this period includes the months leading up to a big deal general election, I’m pleased to see that only 5% of our news sources were politicians or political candidates. There’s still a strong tendency to talk to government and elected officials, but there’s still a nice mix of expert and non-expert voices in a variety of fields represented here.

In general, the number of our sources who identify as white-only has stayed the same since we started tracking over a year ago, ranging from 75% – 84%.

The real development this quarter was the addition of Juneau Afternoon hosts from the Black Awareness Association of Juneau. They’ve been running the show on Thursdays for a few months and that’s really increased the representation of Black voices on the program.

Across all of our programs and stories, there is still very little in the way of Asian, Hispanic/Latinx and Hawaiian/Pacific Islander voices. 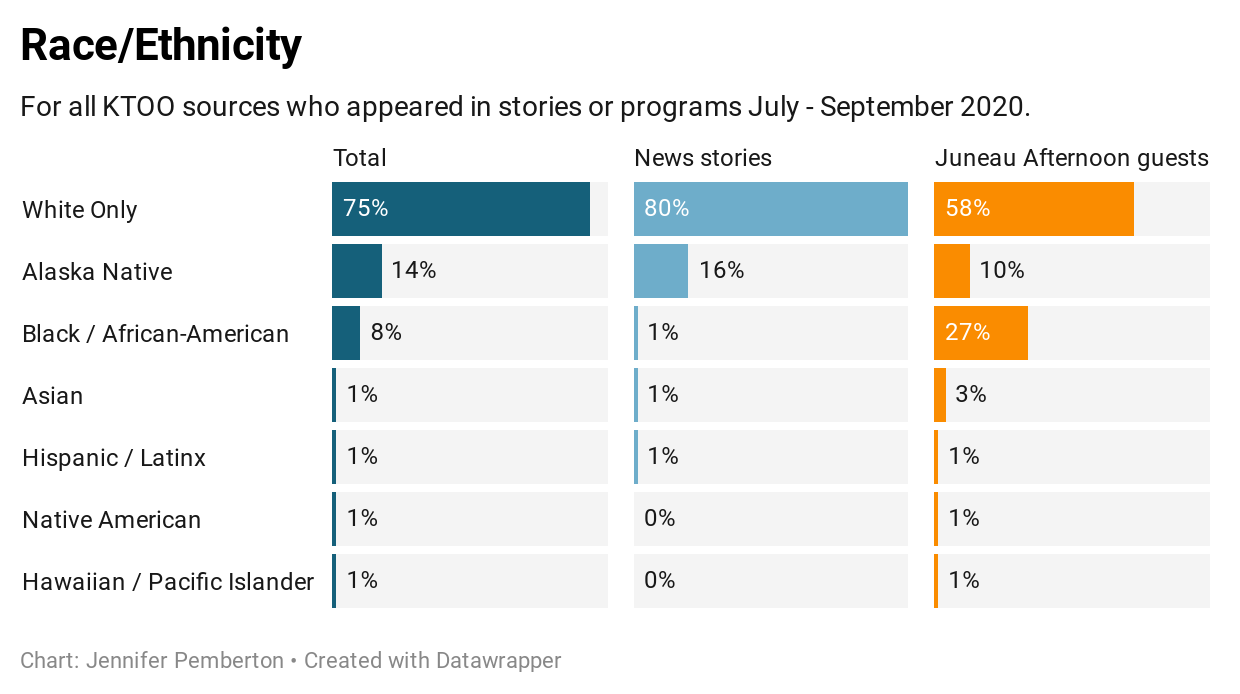 One thing we always look at when we look at the racial and ethnic makeup of our sources is the focus of the story. The mix changes when the story or program has a focus on race.

Stories that are not about race always feature the most white-only voices and we start to see Black and Indigenous sources appear in stronger numbers when the story addresses race or is about race. While this is one way to get more diverse voices on the air, it’s a very limited way of changing the overall inclusivity of our stories. 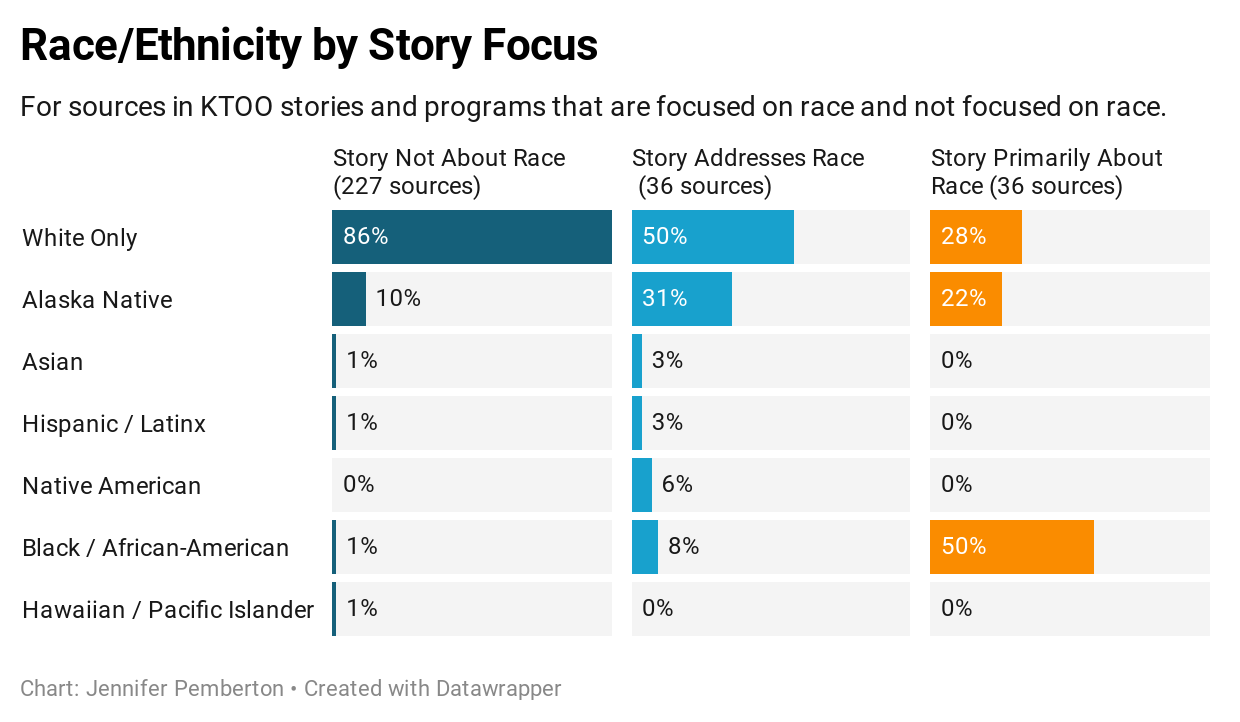 In addition to sharing all this information with you, our audience, every quarter, we also dive into it as a team. It has not been easy to set goals around our source diversity, but it is easy to see that there’s so much incentive here to try and do things differently. And as NPR’s Chief Diversity Officer Keith Woods, who has been guiding us through some of this work says, “just change something.” It doesn’t matter what. The possibilities are endless and there’s a big ol’ world out there of voices in our community that deserve to and demand to be heard.

Here are a few examples of thoughtful, inclusive sourcing: