Juneau residents who are running out of heating oil are experiencing delays in refilling their tanks. Meanwhile temperatures are in the single digits, and with wind chill, some nights it’s dipping below zero.

Fuel companies say the delay has a lot to do with the weather.

Over the last few weeks the community has seen significant snow, which gave way to strong winds and dangerously cold temperatures.

Ryhan Nydam lives in Lemon Creek. She relies on oil heat but recently ran out of fuel.

“I woke up the next morning and my house was 40 degrees,” she said

When she starts to get low on fuel, she usually calls Petro Marine Services to get a refill. But when she ran out, she says she was told the company is scheduled a month out for customers who aren’t on automatic refill. And she isn’t.

“I couldn’t afford to pay that much upfront every time that they stopped by, so doing it just on your own time you can kind of budget yourself a little better,” she said.

So Nydam went to Ike’s Fuel company. The company is about a week out for new customers currently, but Nydam figured it was better than waiting a month. She says she signed up to be a new customer and tried to get put on automatic refill, but the company told her there’s a 200 gallon minimum. Her tank isn’t that big.

A callout on social media eventually helped her get some fuel. Someone knew a guy who works at Delta Western. She says the Delta Western employee gave her his personal number, and he was able to get her fuel later that day.

By the time Delta Western got to her house, she says there was ice around the pipes that get the fuel to the house.

“We had to pump the heater going to get it going a couple times,” she said. “I had to get back to work, so then my dad stayed behind and he sat there and pumped it for like an extra hour.”

Nydam says it was stressful trying to find somebody who could get her fuel when she was in an emergency situation.

Russell Cooper with Petro Marine Services says that the company will bring fuel to customers to hold them over until they can refill the tank, and that the wait time for customers not on automatic refill was 3-5 days — not a month.

Cooper says that weather is creating a lot of challenges for the company’s fuel truck drivers to get to some locations. Especially locations that haven’t been plowed.

“And it’s just, you can’t get to them,” he said. “It’s just dangerous. You don’t want to take a fuel truck up these roads.”

Cooper says COVID-19 is also impacting the company. A few months ago he had four employees out at once.

“It’s just a perfect storm of the weather and COVID,” he said.

“The way it’s looking. I mean, we’re in January already. And February is usually a cold month in Juneau,” he said.

Phil Isaak is the manager at Ike’s Fuel, and he’s been in the fuel business for 37 years. He describes similar difficulties getting to people’s houses, especially out the road.

And he says icy roads are a challenge for the fuel trucks because the chains only work on snow.

“You know, we chain up our trucks, but you just make ice skates out of them,” he said.

Then once the truck gets to a location, sometimes the oil tank is completely covered with snow and can’t be found. Or there are large icicles over the tank. So it’s taking longer for the fuel companies to refill the tanks.

And that means fewer deliveries can be made each day.

“You know the guy that normally gets out 25 deliveries might only get out 12 or 14 because of the conditions,” he said.

And the backlog piles up. On Monday Isaak got 63 calls to Ike’s Fuel, and right now it’s about a week long wait for new customers trying to get fuel.

Isaak says he and the other companies in town are stressed out about the situation right now, especially with more snow forecasted for this weekend.

“When I saw the end of the week forecast was 39 You know, I was on my knees thanking God and then someone said ‘Oh, but it’s gonna snow first.’ And then I was like, ‘Oh man, I don’t know what we’re gonna do.’ But the lead driver over here, Dave, my right hand man, he says ‘We can just do what we can do,’” Isaak said.

Isaak says some things that can help speed up fuel deliveries are plowing and sanding driveways, clearing a path to the tank, clearing snow or ice above the tank and loosening the fill pipe with a pipe wrench. 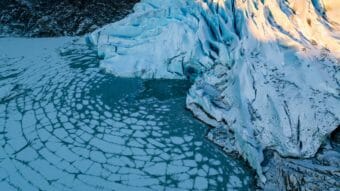