In September of 2020, a woman housed at Juneau’s correctional center complained to the state that she wasn’t getting appropriate medical treatment.  She described living in a tent with no running water or indoor plumbing along with other women. She said it was unhygienic and put other inmates at risk of infection and illness.

A month later, a man complained that Juneau’s correctional facility put him at risk of contracting COVID-19. He described an extra-long quarantine period of 27 days because new people kept being added to his group and they all got exposed. He said he didn’t get adequate medical attention at the time either.

These complaints are detailed in a new report from the Alaska Ombudsman’s office. That’s the neutral office that investigates complaints against state agencies.

The state’s ombudsman, Kate Burkhart, says there are a few important things to know about the investigation.  One, this is a crowded congregate living facility.

“Lemon Creek is not designed for a pandemic, it is not even designed to hold inmates in separate cells, it’s much more barracks-style. And it’s I mean, there’s more people there, then there’s space,” Burkhart said.

And, when the complaints were made in 2020 — a lot of things were different than they are now. Vaccines weren’t yet available, case counts were still relatively low because the state hadn’t encountered some of the highly contagious variants that came along in 2021.

So, Burkhart said they limited their investigation to what the Department of Corrections would have known about the virus and containing it at the time.

She also noted that when state investigators were digging into the COVID-19 strategies at Lemon Creek – the facility hadn’t had an outbreak. That has since changed, in 2021 dozens of inmates tested positive for the virus.

The allegations detailed violations of the state corrections department’s own plan for responding to the pandemic. For example, the man who complained said didn’t get his temperature checked for most of the time that he was in quarantine — including a full week when he didn’t get one. That was supposed to happen daily.

“What we determined was that the facility did have trouble consistently conducting the temperature and symptom screenings, due in large part to lack of staffing because their medical staff — which is pretty skeletal to begin with — was also dealing with having to stay out because of COVID exposure,” Burkhart said.

We want to hear from you

If you have been incarcerated in Alaska during the pandemic, we want to hear from you. Contact Rashah McChesney via email or call 907-463-6441.

Some of the problems stem from things that aren’t easily addressed — like overcrowding. The Lemon Creek Superintendent, Bob Cordle, is quoted in the report saying that it’s hard to socially distance when you’re living in a shoebox.

But, overall Burkhart says the state corrections department was pretty responsive throughout the investigation. She says the department’s COVID-19 response plan is a living document; it has been updated several times during the pandemic.

For instance, after the woman complained about living in a tent with no running water, corrections officials put a sink close to the tent that they say women living there can access at any time. And, the state started recruiting for more medical staff. It also contracted with two companies to help with COVID-19 testing.

The ombudsman’s office did make one recommendation for another thing Lemon Creek Correctional could do.

“We recommended that the correctional officers be trained to do a basic screening,” Burkhart said. “Kind of like what happens when you like try to go to your gym or other places in the community where they take your temperature and ask, ‘Do you have any symptoms?’”

But, it’s not clear if corrections officials will make that change – and the ombudsman can’t force them to. The state’s Department of Corrections hasn’t yet made anyone available to talk about the issues detailed in the report, but Lemon Creek Superintendent Bob Cordle detailed some of the problems and solutions in a recent interview with the Juneau Empire.

Hundreds of other inmates have tested positive for the virus across the state. At least six of them have died. But this report only covers Juneau’s jail. Statewide, there could be other issues with other correctional facilities. It’s hard to know because the ombudsman’s office keeps investigations confidential until they’re finished.

Burkhart says her office was anticipating a wave of complaints about how state departments were handling COVID-19 and that didn’t happen.

“The lack of complaints doesn’t mean there’s a lack of problems,” she said.

And if you are having a problem or have a complaint with a state agency or service, go to Alaska Ombudsman’s website or call 907-465-4970 for resources, referrals and assistance. 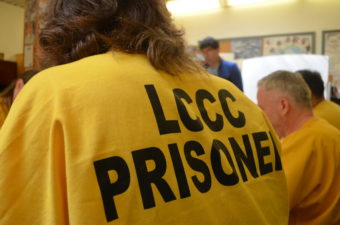 According to the city, both had recently been admitted to the facility and were in quarantine, so they didn’t have contact with other inmates.