The Juneau School District is no longer requiring students to quarantine at home after being exposed to someone who tests positive for COVID-19.

Instead, families now have the option to use antigen tests before sending their kids out the door.

The school district has received 850 antigen tests from the state. Those tests are distributed to families on a case-by-case basis when students are exposed to someone who’s COVID-positive.

“In each of those cases we were able to eliminate the need for students to quarantine,” Weiss said. “And so far, none of those tests have come back positive.”

In the past, when unvaccinated students were exposed, they had to stay home from school for seven days. They would get a PCR test for COVID-19 on the fifth day (to make sure they were clear) and could return to school on the eighth day.

Until recently, all elementary school students were unvaccinated, which meant frequent quarantines for classes in those grade levels.

Now, when unvaccinated students are exposed, the family can decide whether they’d like to quarantine or pick up antigen tests to use for the week.

“We give [the tests] to the parents when we notify them that their child was a close contact, and they test their child before school,” Weiss said. “With a negative on that antigen test, then they can send their kid to school.”

Juneau Public Health still suggests those kids stay away from community activities during that time. If the student develops symptoms at any point during that period, they have to get a PCR test and they’re still required to get a PCR test on the fifth day, even if they don’t develop symptoms.

So what’s the difference between an at-home antigen test and a PCR lab test? Juneau Emergency Manager Robert Barr said a PCR test is much more sensitive.

“It’s generally thought that the amount of viral load that you need to be infectious, correlates pretty well with the sensitivity of antigen tests,” Barr said. “So while a PCR test might detect you a little bit sooner, even before you’re infectious, antigen tests are pretty good at detecting you once you are infectious.”

Both tests require a nasal swab. The hope is that as more students get vaccinated, and as long as they don’t show any symptoms, fewer families will have to worry about testing at all.

During the first round of city-run vaccine clinics for children five and up, 648 kids received a shot. Second-dose clinics for those children will begin Nov. 29. 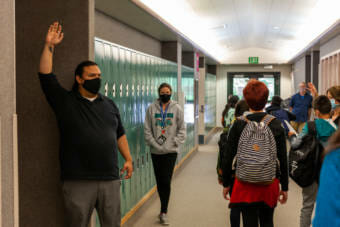 After more than an hour of public testimony from parents, students and educators with different viewpoints, the board voted unanimously to bring back a mask-optional policy. 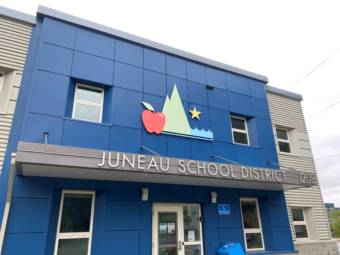 Masks will be required inside Juneau school buildings again

Families were alerted about the reinstated mask requirement through text and email on Saturday. Face coverings will be required through at least the next week.

Kax̱dig̱oowu Héen refers to a part of the Mendenhall River. And could soon be used to refer to the elementary school that sits on its banks in Juneau’s Mendenhall Valley.