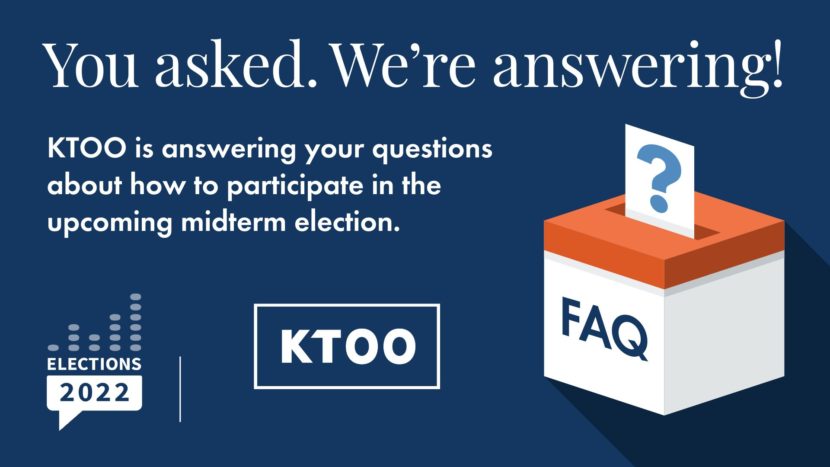 KTOO has partnered with America Amplified to answer questions about how to participate in the special and midterm elections. Here are some of the top questions from Alaskans we have been able to answer thus far.

Do you have a question we haven’t answered yet? Submit your question at the bottom of this page.

When is the election?

The Midterm Election is Tuesday, November 8, 2022.

In general, the polls open at 7:00am and close at 8:00pm in Alaska.  But check your local polling place to make sure.

Early voting in most precincts begins on October 24. You can search for early voting locations here:  https://www.elections.alaska.gov/avo/. Voted mail-in ballots can be delivered to any Division of Elections office, an Early or Absentee In-Person Voting Location, or at a Polling Place on Election Day.

What’s on my ballot?

Where do I register to vote? How do I find out if I’m registered to vote?

You can check your voter registration status by going to the Division of Elections website and filling in your information.  The registration deadline for the November Midterm Election was October 9, 2022.

What do I need to take with me to the polls?

You will be asked for identification by the precinct register worker such as: Voter ID card, driver’s license, state ID, military ID, passport, hunting or fishing license or other current or valid photo ID. If you do not have the one of the identifications listed above, you may present a current utility bill or paycheck, government check or bank statement or other government issued document.   The election worker will look up your name on the precinct register. Upon locating your name, you will check your residence address. If your residence address has changed, you will be asked to vote a questioned ballot. If you do not have any changes, sign your name in the space provided.

What CAN’T I bring with me to the polls?

Who running is an election denier?

We asked all the candidates for governor and US House and Senate if they believe Joe Biden won the election in 2020. Their answers are published in our candidate comparison guide.

If you don’t rank a candidate your vote will not be counted toward that candidate. Your vote is only counted for one candidate. If your first choice is eliminated, your vote moves to your choice for #2. If you do not rank a #2, your vote does not get redistributed.

I lost my Driver’s License and my Real ID is still in the mail. My passport is in the process of being renewed. I have my voter registration card. Are there other forms of ID (birth certificate, printed temporary REAL ID) that work to vote?

You will be asked for identification by the precinct register worker such as: Voter ID card, driver’s license, state ID, military ID, passport, hunting or fishing license or other current or valid photo ID. If you don’t have one of those, you can bring a current utility bill or paycheck, government check or bank statement or other government issued document. Voting this way will be considered a questioned ballot which just means a bi-partisan review board will review and determine if your ballot can be counted.

Why is the final list of  candidates to rank limited to only four? A bigger list will allow more choice which is the whole point of ranked choice voting.

I don’t understand the Nonpartisan Pick One Primary Election. How are the candidates qualified to move to the general election?

In the nonpartisan pick one primary election, voters vote for one candidate in each race regardless of political party or affiliation. The four candidates who receive the most votes advance to the general election. If there are less than four candidates in the primary, they all automatically advance to the general election. There’s more information on the nonpartisan primary election process and ranked choice voting at the state Division of Elections website

For the special general election, are voters able to write in two names to rank along with selecting one candidate from the names listed on the ballot?

There is only room to write in one candidate per race on your ballot, according to the Alaska Division of Elections. It also notes that write-in candidates will only advance if they come in first or a close second. You can read more information about ranked choice voting here: https://www.elections.alaska.gov/RCV.php.

So the ballot measure of 2020 that instituted ranked choice voting did not apply to primary elections?  That’s why we have pick one primaries?  When and how (e.g. statute, court order) did primaries with all parties on one ballot start?

The pick-one open primary was part of the ballot measure in 2020, the voter-approved law that begins with this year’s elections. You can read more at alaskansforbetterelections.com, which is the group that lobbied for the new law.

Where can I get information about each of the candidates?

You can check out our very cool Candidate Comparison tool at ktoo.org/elections for a more complete listing of the candidates.

Where can I see a sample ballot for the election that is starting today, 10/24/22?

The Alaska Divisions of Elections website can show you your sample ballot, based on what House district you live in.  (If you don’t know your district, go to census.gov and put in your address to find out).

The contest [for Governor] appears to be between the size of the dividend and funding education.  Where do the candidates stand?

Using our candidate comparison tool, you can look at where candidates stand on the issues that matter most to Alaskans, including the dividend amount and other state budget considerations.

Did Buzz Kelly withdraw [from the U.S. Senate race]?  What will happen to the votes that are for him?  Will he be in the first round of vote counting?

Buzz Kelly withdrew from the race in September after finishing fourth out of five candidates in the primary election. He did not withdraw before the Alaska Division of Elections’ Sept. 5 withdrawal deadline. So his name remains on the ballot and votes for him will be counted. It’s likely that he’ll finish last and if that happens, in a second round of counting the people who ranked him first will have their votes reallocated to the candidate they ranked next. But if somehow he wins with more than 50% of first place votes, then he will have to decide after the election results are certified if he wants to be senator or not. If he doesn’t want to be senator, then the Governor would call a special primary election to fill the vacant senate seat.

I’m thinking about just dropping my completed ballot off at the Division of Elections Juneau office.  Am I able to do that now? Could they lose my ballot there easier than if I mailed it?

You can drop off your ballot at one of the two polling places in Juneau that are open for Early Voting: the Division of Elections office at the Mendenhall Mall in the Valley or in the State Office Building Downtown. In Alaska, this is considered in-person absentee voting — because you are submitting an absentee ballot in person instead of sending in the mail.  If you drop it off anytime between now and 8 p.m. on Election Day you can be assured that your ballot will be secure and your vote will be counted.

The only risk with mailing your ballot is missing the deadline – if it is not postmarked on or before election day, your ballot won’t be counted.

This post will be updated as we continue to get questions, and find answers!