On December 2, one year ago, a huge landslide had just torn through Beach Road in Haines. It destroyed houses and killed two people, whose bodies were never found. The road was barricaded to keep people out of the danger zone.

There’s still an orange caution sign, but now a temporary access road passes through the debris. From far away there’s a huge white scar on the side of Mt. Riley. Up close, it’s hard to imagine what kind of force could pull down this much of a mountain.

Haines Mayor Doug Olerud is driving on the road because he doesn’t like to walk it. There’s no other traffic, and wet snow sticks to the windows of his truck.

That’s because he can imagine where the houses used to be. One home is still there but knocked off its foundation by trees and rocks. It looks like a toy next to the huge swath of turned up earth.

In the early months after the slide, no one was allowed on the road. Residents fought to cross the slide and retrieve the belongings they left behind when they left their houses on the day of the slide.

A half mile past the slide, things start to look normal.

“Then you can see we’ve got people out here,” Olerud said. “Their driveways are plowed, especially at the far end of Beach Road here. Several of them are very happy to be out here.”

The borough got power out to the end of the road by July, but to access these homes you need to pass through what the borough calls the Red Zone, an area that’s geologically unstable.

Closer to the Red Zone, the driveways aren’t plowed. People haven’t come back.

The borough is still waiting for answers about the long-term stability of the area. A landslide contractor promised a study by the end of December or early January. Their instruments are visible in the snow.

Olerud says the findings will guide the borough through the next steps of recovery. The study will help determine whether these homeowners qualify for a land swap with the state, for example. Olerud says some of them are still frustrated with the borough’s decision to call this area a hazard—it will likely ruin home values and jeopardize insurance. He says he stands by that decision, but he’s surprised there wasn’t federal aid for individual people who lost homes or cannot return to their properties. Any federal money has to go through the borough.

“Nobody’s ever going to be made 100% whole out there,” said Olerud. “That’s not going to happen. But what can we do to get them as close to whole as possible? And that’s going to be an ongoing struggle. And I wish I had better answers for them.”

Beach Road is what most people outside of Haines might think of when they think of the December weather disaster, but destruction was spread throughout the Chilkat Valley. Landslides damaged and destroyed homes on Lutak Road, and flooding wreaked havoc on roads and homes in the townsite.

Olerud estimates 40% of households in Haines sustained some kind of damage from the storm. The work of the last year has been putting homes and infrastructure back in order.

“For the last year, my life has been dominated by disaster recovery,” said Sylvia Heinz.

She was hired by the Chilkoot Indian Association to manage a $900,000 federal housing grant to help the Haines recovery. She is also a coordinator for Haines’ long-term recovery group. They’ve put 16 households back in  homes since this summer.

“Yeah, it’s not 23 anymore,” she said. “That never feels like success to me. I think that’s part of the story, that the recovery needs are so enormous.”

The response has also been huge. Her recovery team helped over 130 households that needed assistance. They disposed of nearly half a million pounds of construction and demolition debris. They partnered with an international disaster response group that helped with cleanup and pledged to rebuild two homes.

“We’ve made much more progress in the last year than I would have imagined when we were in April,” she said. “The road seemed endless.”

After last year’s slides and flooding, nearly two dozen households were displaced. More than half of them were from Beach Road. There are seven left to go, including Vanessa Wishstar and her family who lived in a home right next

to the path of the slide. Now, they’re in the Lower 48 with her family, trying to figure out how to make Haines home again.

“A lot of our neighbors are all in the same situation that we’re in,” she said. “A lot of them — actually most of them — are living with family or just kind of bobbing around, bouncing around and also searching for work.”

She said she’s still terrified when there’s a downpour, or when a train passes by — sounds that are too close to what she heard when the mountainside came down around them. Last year, she said it sounded like a dragon; so fearsome it was unreal.

Back on Beach Road, with the truck’s heater blasting, Mayor Olerud says the human healing from the storm is going to take much longer than fixing the physical aspects of it.

“And that’s the toughest part, because it’s a lot easier to hold all that inside than it is to be vulnerable with each other and let people know that it still sucks,” he said.

High winds, flooding and landslides caused moderate to severe damage in communities across Southeast Alaska Wednesday, as an atmospheric river stalled over the region and brought record-breaking rain. 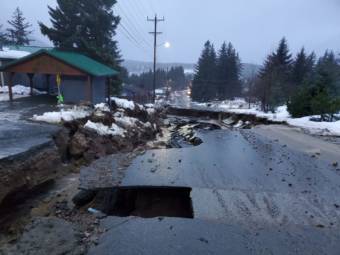 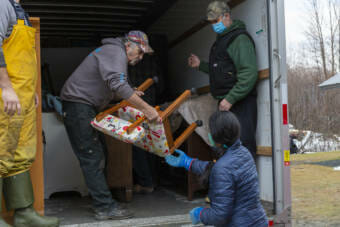 PHOTOS: Haines community bands together after devastating floods and landslides

From a group of volunteers working to salvage a woman's home to a hotel reopening to offer a safe place to stay, the people of Haines are showing they can lean on each other.