City staff said she was having an “inappropriate relationship” with a hospital employee which violates the city’s conflict of interest code. Technically, Bartlett employees are Juneau city employees.

Juneau City Manager Rorie Watt said Lawhorne’s relationship predated her time as CEO. But, once she became CEO, someone informed the city attorney about the relationship

“Under city code, the city attorney is required to investigate those types of things,” Watt said. “The city attorney found evidence. He provided the evidence to Rose to give her the opportunity to provide other evidence.”

The city has been investigating Lawhorne for some time, Watt said it has been weeks because “it takes a little while to work on these issues.”

Watt said once the city attorney went to Lawhorne with proof that the relationship was happening, she stepped down.

The hospital’s Board of Directors held a special meeting on Saturday to accept her resignation; then the board voted to fire her. Board President Kenny Solomon-Gross has, so far, deferred questions to Watt.

Bartlett staff got an email on Saturday saying that Lawhorne was gone.

In her resignation letter, Lawhorne said she could no longer serve the hospital as CEO and has enjoyed her years of service at the regional hospital. Lawhorne has been at the hospital since 1993, and before she accepted the CEO position, she was the Emergency Department director, a staff nurse, a data entry clerk, head nurse and an assistant chief clinical officer.

While her resignation letter does not allude to the relationship that led to her resignation she thanked the board for “respecting my need for privacy of my own personal issues.”

Watt said Lawhorne is aware that the city is sharing the details of that relationship and that it is the catalyst for her resignation. In this case, he believes Lawhorne’s relationship with this person pre-dated her time as CEO. Though, he said the city wasn’t aware of the relationship when she was promoted.

“Could this have been dealt with prior to promotion? It could have. There could have been an accommodation made where we created some alternate reporting structure. But, that didn’t happen,” he said.

He said he’s talked to her.

“She clearly regrets her actions,” Watt said. “She’s a long-term, really excellent employee of the hospital who has dedicated her whole career to providing good healthcare to the public. And, she was willing to put herself forward to run the hospital in a pandemic. It’s really sad for all of us. She did a lot of good for the community, and she made a mistake.”

At the same time, he said there isn’t any wiggle room in city code for an employee who has a relationship with a subordinate.

“I think in the national media, you can find examples where inappropriate relationships resulted very poorly for subordinate employees,” he said. “In this case, I believe the relationship was completely consensual. But I think it’s a really important principle to uphold.”

The board has appointed Kathy Callahan as an interim CEO. Callahan recently retired as the hospital’s director of Physician Services.

This story has been updated with details provided by the Juneau city manager. And, it has been corrected to show that while Lawhorne resigned her position, the Bartlett Board of Directors ultimately voted to fire her. 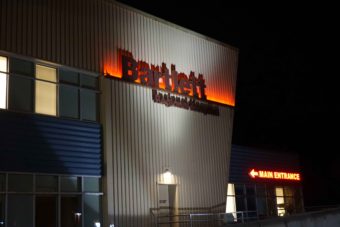 Hospital leadership has not yet announced its next steps.

Tracey Dompeling will take over in the lead role from interim officer Karen Forrest on June 20.