The first large cruise ship in nearly two years arrived in Alaska at the end of July. It marks the return of the region’s biggest source of tourism, once a multimillion-dollar industry that fueled tens of thousands of local jobs.

In the remote village of Hoonah, tourism at the Native corporation-owned Icy Strait Point destination fuels the economy. The community is vaccinated, masked, and ready to make up for a lost season — even as case counts rise dramatically statewide.

At 5:00, the sun is still high in the sky when the Serenade of the Seas sails into port at Icy Strait Point in Hoonah. Local dancers and singers wait at the top of the dock as a shore crew scurries to secure the thousand-foot vessel.

It’s a late start to the season, but one that marks an end to nearly two years of industry standstill for the state — a hiatus that cost an estimated $3 billion and more than 40,000 jobs in Alaska alone. Those losses are concentrated in Southeast Alaska, where cruising is about the easiest way to get large numbers of tourists to destinations off the road system.

George Dalton Jr. is one of the dancers. He wears his regalia, a white fur headpiece that shifts as the wind picks up and a felt cape lined with buttons and a moon beaded on his back.

“I’m telling you my heart is pounding right now, with watching this ship tie up,” he said.

Last year was supposed to be the biggest cruise season yet.

“I was really missing it big time,” Dalton said.

When the cruise season was canceled in 2020, he had to put plans to buy a new engine for his boat on hold. He’s one of about 100 employees hired back this season, only about a third of the full workforce.

This ship is carrying well under half of its usual passengers — fewer than 1,000 people — but that’s enough to nearly double the population of Hoonah for the hours it’s in port.

Drums pick up as passengers disgorge from the ship onto the dock. Some walk up the boardwalks towards food and souvenirs, others line up for sightseeing tours.

“It’s been just like a regular cruise other than you just have to wear a mask,” said Karen MacMillan from Clinton, Mississippi. She says there are perks to cruising in a pandemic; there are no lines for activities on the boat. Crew members outnumber the passengers.

She has been to Alaska before, but her grandkids — among the tiny minority of unvaccinated passengers on the ship — are seeing it for the first time.

Her granddaughter Harper is almost 9 years old. She wears pink sparkles above her eyes and wears a green and white polka dot mask. It’s required indoors and out.

She deemed Alaska “awesome.” And the mask?

The kids won’t be able to go into the town of Hoonah, since only vaccinated people are allowed, but they do get to go on a whale watching tour.

Health precautions on the boat are dialed in tight. Anyone over 12 years old must be vaccinated. Icy Strait Point requires masks indoors regardless of vaccination status. And in Hoonah, a remote, largely Tlingit community of around 800 people, there are rules too. Unvaccinated visitors must quarantine or produce negative test results. That’s because there’s a local health clinic there, but no hospital. There have been only about 30 cases of COVID-19 since the beginning of the pandemic between Hoonah and its neighboring village of Angoon.

It’s a good track record, and officials hope to keep it that way, even as Alaska is among the states with the fastest rising case counts.

“Still happy to see ‘em, I just keep my distance from the ones that ain’t wearing the mask. Six feet away,” said Myrtle Brogdon Sharclane, as she walked against the tourist traffic towards the vessel with her brother.

They had to show their vaccination cards to come out to the docks from town. She’s from Hoonah, but visiting from Seattle. She scans the tourists walking up the dock.

“They just came from Sitka. There’s a hundred people there that have the COVID. I just heard on the news this morning. I don’t care if they don’t wear it, but we’ve got to protect ourselves,” she said.

Sharclane is a shareholder in the Native corporation that owns Icy Strait Point, so her pocketbook was hit when the cruise season was canceled last year.

She says she’s excited to see cruises back and she’s worried about COVID-19. Her mask is loose at one corner and her brother offers her a fresh one.

“I think personally that they moved too fast. And it’s all striking us hard again,” she said.

It’s taken a lot of effort to get to this moment. Congress passed a special waiver to allow cruise ships to bypass Canada’s closed port this summer. The cruise industry had to implement protocols and open up bookings in record time.

His mask covers a smile as he surveys tourists shopping and eating crab legs in the sun.

The Centers for Disease Control and Prevention put the Serenade of the Seas on a yellow alert the morning the cruise arrived. Tamis says that alert is part of the new normal. It’s raised when a passenger exhibits any symptoms at all until a negative Covid test comes through. He says there are no COVID cases on the ship. The alert went down to green the next morning.

“We’re in great shape. It’s just part of the normal protocols that the CDC has when they’re just, you know, overall regulating and making sure that we come back in a very safe, a very moderated way,” he said.

Hoonah looks like what the brochures promise. Thick spruce trees cascade down the mountainside to blue water, where salmon jump. Bright pink fireweed blooms on the beach and the first thimbleberries are ripening on the sunny side of the boardwalks.

Even locals stop and turn when the sun catches on the slick black fin of an orca that pops up twice before it’s gone. 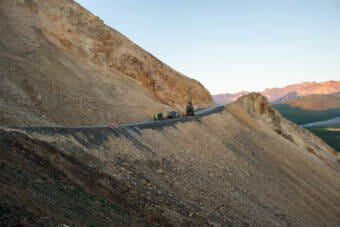