For months, officials with the Central Council of Tlingit & Haida Indian Tribes of Alaska followed along as the Juneau Assembly developed new restrictions on the use and sale of fireworks. The tribe started Juneau’s only licensed fireworks retail shop last year.

Parts of the proposed policies butted up against the tribe’s sovereignty, and nearly drove it to take the city to court.

At times, Tlingit & Haida tribal officials were outraged — not over limits on the use of loud fireworks that the tribe sell, but because some city officials brushed aside the tribe’s assertion of its sovereignty on the land where it runs its fireworks shop.

For example, during an April Assembly committee meeting, Assembly member Greg Smith asked, “If the tribe was building a building or housing on tribal land, would they still need to get permits from Community Development and building permits and those types of things?”

Assembly member Loren Jones responded: “Mr. Smith, I think the answer is no, they would not. But I don’t know of any tribal lands, federally recognized tribal lands, within the borough.”

Tlingit & Haida President Richard Peterson said it felt like a personal attack on the tribe.

“It’s about the most irresponsible and incorrect statement I’ve heard. It’s offensive,” he said during a Tlingit & Haida executive council meeting on May 21. “We’re selling fireworks on a Indian allotment. That is restricted land, that is Indian land,” he said.

There’s a lot to unpack in these statements.

“Indian land” isn’t a well-defined term, though the tribe said Peterson was referring to a federal code that categorically defines Indian allotments as part of “Indian country.” That definition applies to a chapter on criminal codes and procedures.

In Alaska, there’s more than a century of federal laws and court cases that further define “Indian allotment” and “Indian country,” plus the rights and responsibilities attached to them. Indian allotments and Indian country are separate distinctions in case law and codes that often overlap, though tribal sovereignty is clearest in Indian country.

Assembly member Jones, with the city attorney’s agreement, was essentially saying there is no Indian country in Juneau. Peterson said this particular land on Douglas Island is both an Indian allotment and Indian country, so the tribe is sovereign there.

There’s another legal wrinkle: Tlingit & Haida doesn’t own the land. Public records show the tribe leases it from the heirs of a man who owned it by way of an Indian allotment, also known in Alaska as a Native allotment.

Over the years, the federal government granted thousands of land allotments to Alaska Native individuals as one way to try to make up for injustices. Native allotments can’t be taxed or easily transferred or sold. They’re supposed to stay with the original grantee and their heirs.

There were at least two elements of the Assembly’s fireworks legislation that challenged the tribe’s sovereignty. One would have required the tribe to get a permit from the city to continue selling fireworks in Juneau. The Assembly sidestepped that issue by exempting federally recognized tribes. But just barely — the Assembly adopted the exemption in a 5-4 vote.

The other issue was over the city’s sales tax.

During a meeting, Assembly member Michelle Hale asked, “Does the City and Borough of Juneau have the authority to assess sales tax on … a business that is occurring on a Native allotment?”

City Attorney Robert Palmer said it was a really tough question, and didn’t have a definitive answer. But he has said the rights the lease affords the tribe may not be clear cut.

City codes usually exempt the sales of nonprofits and tribes from sales tax. But Juneau Assembly member Loren Jones pushed to have the tax apply to fireworks.

“We all are gonna be impacted by every firework they sell,” Jones said. “It’s going to impact every place in this community. And we should collect some revenue for the response to that impact.”

President Peterson bristled at the suggestion that the tribe doesn’t contribute enough to the community.

“I’m pissed off,” he said. “And they got what they wanted, cause now I’m putting on my war paint. You want to be good neighbors and good partners? You don’t come out at us with racist, ignorant statements, like, you want to now tax an Indian allotment. Which you can’t, so good luck on that, we’ll see you in court, that’s how I feel about it.”

He said the tribe has won a series of court cases asserting tribal rights.

As for the tribe’s contributions to Juneau, he said the tribe is responsible for more than 300 jobs and brought more than $44 million into the local economy last year. And Peterson said the tribe provides essential services that the city government otherwise would have to.

The Assembly had its final vote on the sales tax question on May 24. Jones was resolute.

This time, Jones was the only Assembly member who voted to lean into the conflict. Tlingit & Haida’s fireworks sales won’t be taxed.

The Juneau Assembly did adopt new restrictions on the use of fireworks that will take effect ahead of Fourth of July celebrations. 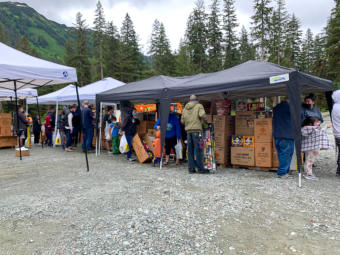