Erika Judson and Mike Riley are commercial fishermen who usually live on their boat. Judson says she was born and raised on the water, and living at the harbor is just common sense.

“It’s so much more affordable than an apartment,” Judson said. “You know, you rent a studio apartment for 1,000 bucks a month when you could pay a couple hundred bucks and live on a boat and enjoy the simple life and not have the stressors of, ‘Can I can I afford this?'”

Recently, Riley and Judson have been staying with family to care for Riley’s mom. When they live on the harbor, they pay a monthly residence surcharge of $69 per month along with moorage and service fees. Altogether, they pay about $312 a month to live at Statter Harbor.

About 140 people live in Juneau’s harbors. Juneau’s Docks & Harbors board proposal would have hiked their fees by 100%.

Riley says many of his neighbors are folks who, like him, just want to live a simple life. Many are elders who just can’t afford to live anywhere else.

“I believe that to a point it’s, I think, it’d be city-sanctioned gentrification,” Riley said. “They’re trying to get this place for tourists. Doubling liveaboard fee with a bunch of people that I know that actually are liveaboards that are pensioners — it’ll break them.”

Another issue for Riley and Judson is the facilities and public services. They have basic bathroom facilities and sewage pumps, but they’re not always available.

Security is also a problem. Riley says while there’s not a lot of crime in Statter Harbor, there is some.

“I’ve seen boats on fire on purpose,” he said. “I’ve seen people fighting. I had thousands of dollars and fishing equipment sold off my boat in the 15 – 20 minute period.”

The Docks & Harbors board voted against raising residence fees after extensive public comment against the hike.

But Port Director Carl Uchytil says Juneau’s harbor system still has financial needs to meet. The last time rates for liveaboards were raised was in 2008.

“The bottom line is that we’ve got to remain solvent,” he said. “And the asks of our harbor patrons — not just liveaboards but all harbor patrons — is growing, and our ability to fund with rates that haven’t changed in over a dozen years needs to be addressed.”

On top of the lack of funds, Uchytil says Docks & Harbors hasn’t seen any steady income since October 2019, before the COVID-19 pandemic. The lost tourism season in 2020 had a severe impact on the harbor system, which he says left it right on the cusp of a negative fund balance.

Uchytil says Docks & Harbors needs money to pay for various infrastructure projects, including rebuilding the north end of Aurora Harbor and expanding the North Douglas Boat Lodge, along with paying off a leased property between Aurora and Harris harbors.

He says regardless of the rate hikes being voted down, Juneau’s docks and harbors have growing funding needs.

“The Docks & Harbors board will deliberately look at our fees and look to see what’s appropriate to increase, and they’ll be looking at probably the oldest fees or the fees that haven’t been touched first, and try to adjust appropriately,” he said.

As for the charge of gentrification in Juneau’s harbors, Uchytil says that’s not the intention of the board.

“We’re not targeting a group for the purpose of moving them out,” he said. “We’re looking at opportunities to adjust fees that have not been adjusted in a long time to serve the community without a burden on sales or property tax.”

Uchytil says he can’t say where the fees will increase, but — one way or another — someone has to help pay the bills.

Editor’s note: After the original publication of this story, KTOO learned Mike Riley and Erika Judson are not registered residents at Statter Harbor. They have lived in the harbor in the past three years and plan to register with Docks & Harbors to continue living there. Information clarifying Riley’s and Judson’s current living arrangements has been added to this story.

Leaders from both House caucuses said that their talks are focusing on the vote on the effective date for the budget bill the Legislature has already passed. 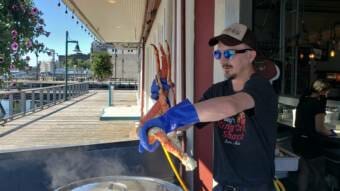 The pandemic may be waning, but its ripple effects have made for a weird summer for visitor industry businesses and for seasonal workers trying to decide if it’s even worth coming back for a short summer.