Early on Saturday morning, Lin Edgar’s friends gathered at her flooded home. There are almost a dozen trucks parked out front and she strides out of her open garage hefting garbage bags full of debris.

“I’ve got I don’t even know how many people here right now. Helping to basically dry my house out move the things that are salvageable upstairs where the water didn’t get,” she said.

She’s been sleeping at a downtown hotel for the last four nights.

Edgar bought her home three years ago. She typically has a few renters. At the time of the flood, though, she was the only one living in the house. Except that after most of her chickens drowned in the storm, she let the sole survivor live upstairs for safekeeping.

“We’re ripping out the carpet. That’s all soggy and opening up the drywall to let it out, to let out the moisture. We’ve got dehumidifiers and things go in. Some of the electricity is starting to dry out and come back on,” she said.

Jason Eason is a former tenant of Edgar’s. He’s leading the cleanup effort.

“I came here on Tuesday, and there was three feet of water in the driveway and still ice underneath. So just kind of wading through that ice water,” he said. “I’ve probably been whitewater paddling in the Arctic for 11 or 12 years and so have a familiarity with that cold water. And I don’t think I’ve ever quite been that cold just getting here and being soaked when I got here.”

He turned off the power and salvaged some of his tools that were still in the garage. Now he’s using them to fix the damage.

“You know, several days’ worth of work was done in a matter of minutes. It seems like,” he said. “Haines makes it happen.”

It was probably closer to three hours, but still, very fast.

Joe Aultman-Moore is a friend of Edgar’s. He read about her misfortune on social media and showed up Saturday morning to help.

“It was actually her Facebook posting was one of the first times I realized, like, you know, this was not just a normal rainstorm,” he said. “And I realized that people were having pretty severe damage. And I guess this was the night before the big slide.”

Wednesday’s mudslide came within a hundred feet of his beach road cabin. He’s wearing the rain gear he evacuated in on Wednesday — orange bibs and a camouflage rain jacket.

The group has worked quickly in the rain and the house is ready to sleep in — just in time for a winter snowstorm to move in. 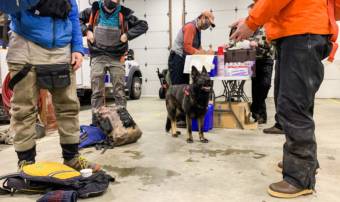 State geologists on Saturday said the ground was too unstable and recommended that search crews stay away from the slide zone. 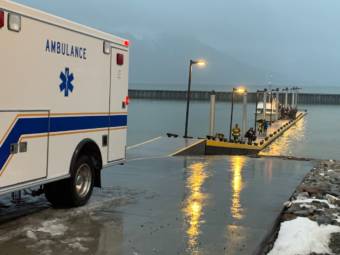