An emergency alert popped up on people’s cell phones in Haines just after 8 p.m. Thursday night. It had been raining all day and continued to rain into the evening.

Mudslides had already swept away houses and left two people missing, and officials feared there would be more slides as the rain kept coming down.

“It sounded like when three feet of snow comes off your roof — that same little rumble,”said resident David Rickey.

He was on the phone with a friend when his neighborhood was evacuated. Lights flashed outside and a Haines Borough police officer rapped on his door.

“I’m not sure how he phrased it,” said Rickey, “But the tone of his voice said ‘get the heck out of here’.”

He and his neighbors spent the night in hotels after reporting to the American Legion Hall where an army of volunteers is helping connect evacuees with shelter. Plastic pop-up tables are piled high with clothing, toiletries, and food. It’s almost too warm inside and smells like coffee.

“So there’s room to run around,” she said. “We’ve been trying to find stuffed animals. And as kids come in, they can get something to hug and hold.”

Other teachers from the district have been visiting during the day. Counselors are on site for anyone who needs to talk.

“There is no shame and any of what you’re going through right now, period,” said SEARHC counselor Kelly Williamsen. “So if you need to talk…we’ve got this. This is what we’re here for right now.”

Back-up counselors are coming this weekend from Juneau to help support the school.

Mayor Douglas Olerud was on hand at the hall to give an update.

Olerud was born and raised in Haines; he runs the family grocery and sporting goods store with his sister. He says it’s hard to take the emotion out of the job when friends are missing and displaced.

“It’s tough. You gotta keep doing the job, but we’re making it. We’ve got a lot of good people supporting us over there… and, you know, a good cry a few times a day helps,” he said.

He had some errands between town updates and a press conference, and one important pit stop.

“I’m going to try and hike up my parents road and go get a hug from my mom and dad,” he said. “And I’m sure that’ll help as well.”

After the meeting, displaced resident Arthur Woodard and his 160-pound malamute headed back towards their hotel room. A rescue boat picked the Woodards off a sandy shore below their Beach Road home on Wednesday. They were reunited with their dog Friday morning after a pet rescue boat found him on the beach.

“The whole community has been such a blessing,” said Woodward. “I mean, my gosh, they evacuated us, they check in, made sure that we were healthy. And it was just very thorough.”

There was even donated pet food.

Rain and snow are predicted to continue into next week.There is a winter weather advisory in Haines through Saturday afternoon. 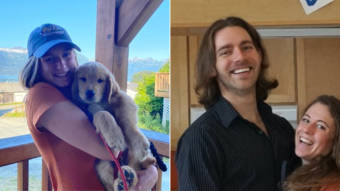 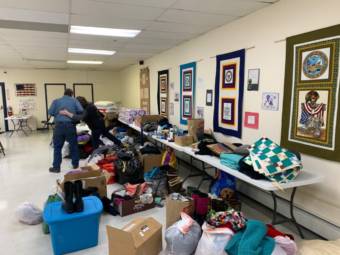 Residents along Beach Road evacuated after landslides destroyed several houses, and dozens of residents at the end of Lutak Inlet have been without electricity and running water since Tuesday.