Interim Haines Borough Manager Alekka Fullerton addressed about a dozen evacuees at the American Legion on Thursday. Emergency responders have prevented residents from entering areas where landslides have made the terrain unstable. Fullerton said they would not be able to return to their homes until it was safe to do so.

Dozens of residents living at the end of Lutak Inlet were trapped Wednesday after numerous landslides blocked the road to town. They have also been without electricity and running water since Tuesday.

The Department of Transportation was able to clear the entire road today, and residents were able to make trips to town for the first time since the slides came down. Some have evacuated the area while others have remained in their homes.

Chuck Mitman is an officer with at the American Legion. He said disasters have a way of bringing the community together.

“Unfortunately, it takes a somewhat tragic event to make everybody cohesive, but they do it quickly,” Mitman said. “I hope it carries over into regular life for a while.”

The local Salvation Army has partnered with the Red Cross to find accommodation for anyone who has been displaced.

Meanwhile, the Central Council of Tlingit and Haida Indian Tribes has organized a large shipment of supplies including generators and water pumps to be distributed by the Chilkoot Indian Association. Tlingit and Haida is accepting donations to assist with relief efforts.

Local residents have organized a GoFundMe campaign to assist relief efforts as well. 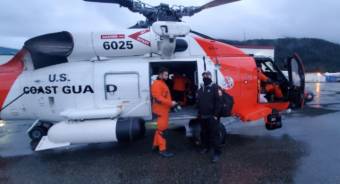 “We know around 56 people are seeking immediate services due to ordered evacuation or stranded travelers that need to get  to their homes or to their next destination."