Each spring in southeast Alaska the Sitka spruce tip harvest happens suddenly and only lasts about a week. With the flavor’s growing popularity and short harvest season, Alaska businesses have come to rely on a small town commercial operation to meet the growing demand.

On a blustery May afternoon, Molly Kelly and her family spread out along the Gustavus treeline near its sandy beaches. They’re picking spruce tips, the bright green nubs that grow on the branches of the coniferous Sitka spruce. The harvest has become an annual tradition in Gustavus that locals refer to as “spruce tipping.”

With a bucket hung around her neck, Kelly grips the branch with a gloved hand and slowly drags down the limb, pulling away a handful of spruce tips. Kelly and her sister Cassie Parker say it can take anywhere from 5 to 20 minutes to collect a pound, depending on energy level and kid interruptions.

“I have not picked many at all, maybe 50 pounds,” said Kelly.

Parker says she’s only got maybe 75 pounds, nothing compared to their nephew Caleb who is nowhere in sight. He’s already already amassed a thousand pounds picking spruce tips both day and night.

The Gustavus “spruce tipping” season all started back in 2000, when the Alaskan Brewing Company approached the family owned fish processing plant Pep’s Packing to provide the spruce tips.

Now the brewery uses Gustavus tips in their many spruce beers, including the Spruce IPA which took home a Gold Award at the bi-annual World Beer Cup Competition this spring.

“One of the families that has been picking from us from the very beginning now has three generations that’s been picking and now they have this rivalry where grandpa tries to pick more than his son,” said Pep.

She says around 50 people partake in the annual harvest, from small children to their oldest picker at 75 years old who used his past earnings to go to Mexico to have dental work.

“Another kid bought a lawn mower a couple years ago with his spruce tip money and then he mowed lawns the rest of the summer,” said John Scott.

With the season beginning right after the school year gets out, the Scotts believe it brings an economic boost to the town.

Because of a cold spring, this year’s spruce tipping season ran extra long, allowing that nephew, Caleb Warren, to collect more than 3,000 pounds in two weeks at this year’s price of $3 a pound. He was this season’s top picker.

After weighing, the spruce tips are packed in 50-pound fish boxes stored in the freezer. When they have enough to fill orders, Pep’s Packing charters a Cessna aircraft to move the product to destinations around Southeast.

Pep’s largest customer is still the Alaskan Brewing Company, but the spruce tips go to smaller outfits like Coppa ice cream in Juneau, and as far as Rogue Ales in Oregon.

In Juneau, Amalga Distillery owner Maura Selenak says they’ve relied on Pep’s packing to provide the spruce tips for their syrups, spruce tip soda, and small-batch Juneauper gin that’s distributed across the state. She says the spruce tip taste is indescribable until you’ve tried it.

“People come in from out of town and they’re expecting a piney flavor, and it’s actually more of a bubble gum sweetness,” said Selenak. “A lot of times people will come in and say this gin tastes like Southeast Alaska or it tastes like the rainforest.”

The distillery could buy ingredients from growers in the Lower 48, but for them  it’s a source of pride knowing their product was hand-foraged by Alaskans, creating economic opportunity in rural communities, and not to mention, a taste of Southeast in every glass. 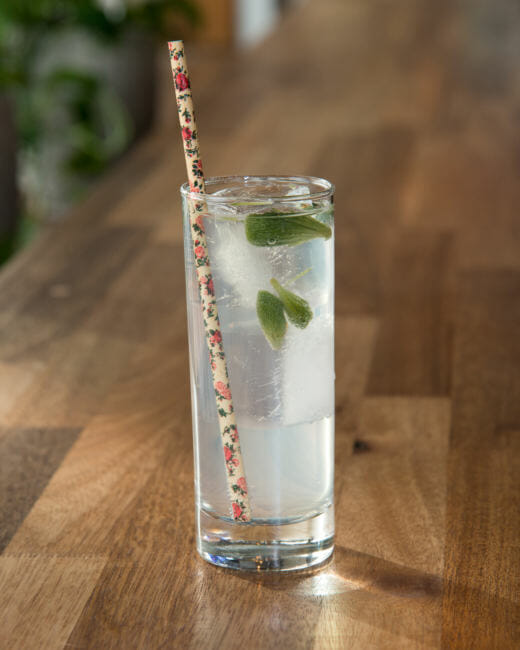