One year ago, Interior Secretary Deb Haaland issued a declaration to remove a slur against Indigenous women from place names on federal lands. Nearly 650 new names were finalized this fall, including one for a Dillingham creek that bore the slur.

But three elementary students in Dillingham — Alora Wassily, Trista Wassily and Harmony Larson — had worked to change the creek’s name since 2021, long before the federal government started its process.

In an interview shortly after the announcement, Alora said they put a lot of effort into reaching that goal.

“It feels good because we worked on it for so long, and it finally got changed, and we just feel relieved,” she said. “We felt accomplished.”

They began advocating for the change when they were in fifth grade, after they heard a local story about seven sisters who had lived along the creek and how both the creek and a road of the same name were marked with the derogatory word.

Now the students are in seventh grade, and they have presented their research many times. They started with the Dillingham Parent Advisory Committee and the school board.

“We were all really nervous our first time. And after a while we got used to it, and we just got normal about it,” Alora said.

Since then, they have presented their research to the Curyung Tribal Council, the Alaska Federation of Natives Elders and Youth Conference, and the Bristol Bay Native Corporation. Robyn Chaney helped the students prepare. She is the Federal Programs Coordinator for Dillingham city schools and has been an adult advisor for the students.

“I think them standing behind their information was really powerful,” Chaney said. “They were part of educating people here, including myself. They received mostly positive feedback and support. And really their confidence grew because their facts are accurate. And it was an issue that obviously became really important, not just to us, but on a federal level that Secretary Haaland would take that up.”

When U.S. Interior Secretary Deb Haaland announced last year that the word would be removed from geographic features across the country, the students’ work got more attention. And they had to shift their approach, taking their grassroots advocacy and fitting it into a political process.

“Our process went from slow and steady to very, very rapid,” Chaney said. “It shifted from us educating and garnering local support for change to a government-to-government relationship, following a tribal process and doing tribal consultation between our local Curyung Tribe and the federal government.”

The students recommended renaming the creek Al’a Creek, and they received broad support from the community during a listening session last spring. But at the last minute, a Curyung Tribal Council member suggested a different name: Amau Creek. Chaney said that was difficult.

“It was just a hard pill to swallow because that name hadn’t gone through the public process. It was in their regular meeting. But it wasn’t a name that had been carried forward in the public process that they set forth. And so it was surprising and upsetting,” Chaney said. “But they still achieved the goal, which was to remove a derogatory place name and replace it.”

The students are the latest in a long legacy of work to re-center Native place names in Bristol Bay. Francisca Demoski is the land manager for the Bristol Bay Native Corporation.

Originally from Togiak, she now lives in Anchorage and oversees the land department’s cultural heritage efforts, including the Bristol Bay Native Place Names project. She said it’s one way the corporation celebrates and preserves that heritage.

“Amau Creek translates to ‘great-grandparent’ and is a Yugtun word. And in this case it references a group of sisters, or great-grandmothers, who according to traditional stories traveled to the area and settled near the creek,” Demoski said. “So the community recognized the role of the great-grandmothers in their families and chose the name to honor their ancestors.”

Demoski said BBNC supports the federal efforts to change the derogatory names of places across the country, including in Dillingham.

“BBNC is pleased with the outcome, and I applaud the young students for taking leadership in making this change happen for their community,” she said.

Demoski helped start the Native corporation’s project almost 20 years ago, in 2003. It now has over 1,400 place names on the website. Many are from the areas around Togiak, Manokotak, Dillingham and along the Nushagak River. There are also many Dena’ina and Yup’ik contributions from around Iliamna Lake.

“I am working with the Bristol Bay Native Education Foundation to gather place names along the Alaska Peninsula, including the Naknek area. So that’s where we’re focusing right now, because there’s very limited data in that area,” she said.

Demoski said its purpose is to “capture and preserve important knowledge and safely archive it before it’s lost.”

Demoski hopes this year’s push to change derogatory names around the country inspires communities to consider changing their own names. She says it’s been done before, pointing to the example of Utqiaġvik, which used to be named Barrow. This is a critical effort, she said.

“And ensuring the survival of our people’s cultural history is of the utmost importance to us, and place names is one way that we ensure that our history is being preserved for a future generation,” she said.

The students’ work isn’t over. They are still working on the next steps to change the community’s signs and replace them with the new name: Amau Creek. 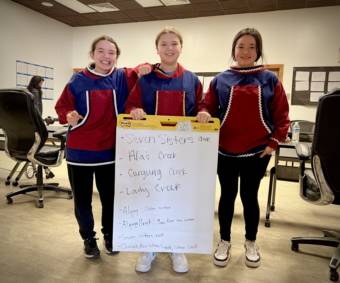 Everyone who spoke at the Curyung Tribe’s talking circle supported changing the name of a stream that runs through Dillingham. The current name of the creek includes a slur against Indigenous women.

On April 2, the Curyung Tribe will hold a community meeting open to everyone in Dillingham to discuss ideas and gather feedback. 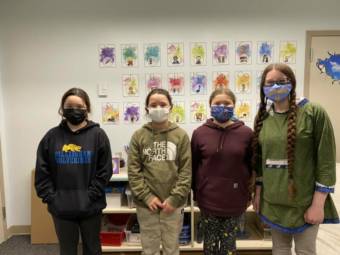 Interior Secretary Deb Haaland on Friday declared “squaw” to be a derogatory term and kicked off a policy to change all federal place names that contain it.