On Nov. 9, the U.S. Supreme Court is set to hear Haaland v. Brackeen — a case that has been recognized as the most prominent challenge to the Indian Child Welfare Act since its creation in 1978.

ICWA was established to grant tribal authority for adoptions of Native children in order to preserve Native families and culture. In August, a bipartisan group of 87 members of Congress — led by four senators, including Alaska Sen. Lisa Murkowsi — filed a brief to the Supreme Court in support of ICWA.

In the case headed to the Supreme Court, several states and individual plaintiffs, including the Brackeen family, alleged that ICWA is unconstitutional and racially discriminatory.

In 1978, right around the time ICWA was passed but before it was actually enacted, Jennifer Quinto was adopted from an Athabaskan family into a multicultural Lingít household in Juneau.

“For my adoption, it was a big gamble,” she said. “And I could have very easily been placed with another [non-Native] family. And how many children are there that didn’t have that protection?”

Her mother worked for the Alaska Legislature for 30 years, so she was close to many politicians and lawmakers. Some of them worked on the Alaska Native Claims Settlement Act, and some were strong advocates for Native women and children.

“I know that myself and my brother both benefited from certain layers of privilege that probably most likely didn’t exist for a lot of other people at the time,” Quinto said.

A sense of survivor’s guilt — for being an adoptee who had the chance to explore her Native roots — has stayed with her.

“There were so many adoptees that I met, that I could feel the intensity of the hurt and the anger,” Quinto said. “And all of that came from the fact that they were being raised with [non-Native] families that just didn’t understand the complexities [of their identities].”

When she caught up with her childhood adoptee friends, Quinto found out that many of them were struggling with addiction and homelessness.

“Physically they may have lived, but spiritually and emotionally, absolutely not,” she said.

Love and family, no matter the distance

From ginger beef and adobo to Jell-O and coleslaw to smoked fish and herring eggs, childhood dinners in Quinto’s family were always a battle over what kind of food would be made.

Her dad was part of an early Lingít-Filipino generation in Juneau and was raised in a big family.

In his generation, the state of Alaska would deem certain Native parents to be unfit and would send their children to boarding schools.

Only immediate family members could intervene, so his mother — Quinto’s grandmother — claimed all her nieces, nephews and distant family members as her biological children so they wouldn’t be sent away.

Quinto felt that when her parents were looking to adopt, her dad wanted to honor her grandmother and their community. She said that they were “making sure that Native children had a safe family and were being brought back into another Native family.”

Congressional reports supporting ICWA’s establishment in 1978 found that as many as 35% of all Native children were being removed from their families. According to the National Indian Child Welfare Association, “85% of those children were placed outside of their families and communities — even when fit and willing relatives were available.”

Even today, Alaska Native youth are overrepresented in Alaska’s foster care system, at a rate of nearly three times what is proportional and expected.

By the time Quinto came into the picture in 1978, the Quinto family’s Native identity had embodied all different representations.

“We have Afro-indigenous in our family, we have LGBTQ, you know all of these different identities. And as an adoptee looking at my family, it just didn’t even occur to me that families look like each other,” she said.

These experiences gave her a different perspective on what defines family.

“Much in the same way that my grandmother erased those lines of being extended family, it’s created this ability to love people as if they are your immediate family, no matter how distant they are,” Quinto said.

By birth, Quinto is Athabaskan with a mix of Inupiaq, Japanese, Lingít and Scottish ancestry. Even with the benefits of being adopted in-state and within the Native community, exploring her identity has been a continual effort for Quinto.

“I’m sure that if there were a placement of a child across the country, they would have a harder time to be culturally connected and understood,” Quinto said. “There’s a lot of people who have the idea that there’s this pan identity for Native people, and yet, it always comes down to the individual. The greater the distance, the the harder it is.”

Quinto shared that many adoptees fear and hide their differences — something she thinks should actually be celebrated. For all families who adopt children, she believes that there has to be support to help adoptees confront their identities and learn about their cultures.

Today, Quinto is the arts education director for the Juneau Arts and Humanities Council. Her own experiences in the Juneau School District led her to want to change how culture and representation are taught in schools.

Now that she has a daughter, she is passing on her stories and lessons of becoming confident in her multidimensional identity.

“I’ve been insulted with all of the wrong slurs probably at this point,” Quinto said.

She tells her daughter that “we honor all of the people who have loved us.”

“You know who you are, you know what you’ve lived and you know your own identity,” Quinto said. “How dare anybody try to challenge that? That’s just somebody telling you that they don’t care about you enough to learn who you are.”

The plaintiffs in the Haaland vs Brackeen case argued that ICWA is unconstitutional because non-Native people were not getting equal treatment to Native people in Native adoptions.

For Quinto, ICWA was never about race or skin color.

“When there’s people who say things like ’I don’t see color,’ well, they never outlawed our color,” she said. “They didn’t make us illegal for, you know, anything, but the way we dance, what we sing about, like, our foods. They outlawed our way of life.”

Quinto’s birth mother recently passed away, and she has been piecing together her birth family since then.

When her birth father heard that her birth mother’s funeral was happening, he drove 60 miles to the village and mailed Quinto a program from the services.

“One little excerpt meant everything to me,” she said. “One of the first things the program said was that my birth mom called everyone auntie and uncle, and people really appreciated it.”

Ever since Quinto was little, she always called people around her auntie and uncle. This was one of those moments that she felt like her feelings had to be coming from her ancestors because it wasn’t a value that her adopted family expressed.

“We often talk about intergenerational trauma, but not a lot of talk on intergenerational knowledge, knowing and feeling,” she said. “It’s taken me a lot to understand, but it is there and it is incredibly powerful.”

To Quinto, ICWA helps adoptees like her to stay connected to their identities and communities.

“Who could ever believe that [ICWA] would be taken away?” she said. “That’s one of the last things keeping our community together in the way that it has, so imagining a world where that doesn’t exist is just too, too painful.”

Hundreds of Indigenous peoples and allies showed up in front of the highest court in the land to show their support for the Indian Child Welfare Act. 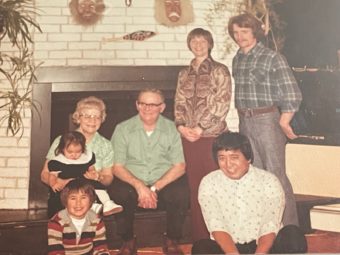 Because Native children represent about 55% of all children in state custody, overturning ICWA would have huge implications for Alaska. 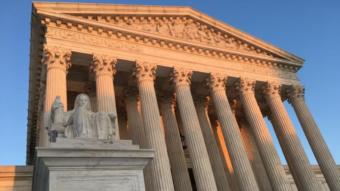