Peltola received a standing ovation on the U.S. House floor after House Majority Leader Steny Hoyer, D-Md., announced that she had just made history.

“She made history by becoming the first Alaska Native to be elected to the Congress of the United States,” Hoyer announced to applause. She also made history as the first woman to represent Alaska in the U.S House.

Peltola was sworn in about 2:30 p.m. Alaska time, or 6:30 p.m. Eastern. Her reading of the oath of office was broadcast live on the U.S. House’s website and on C-SPAN.

Hoyer called Peltola the “perfect successor” to Young and “an important addition to the House.”

“Peltola is widely known across Alaska not only for a strong record as a state legislator, but as a champion for rural and Native communities who are too often overlooked by policymakers,” he said.

Peltola is a Democrat who is Yup’ik and has deep roots in the Bethel region. She defeated two Alaska conservatives — former Gov. Sarah Palin and Nick Begich III — in the special U.S. House election on Aug. 16. She will serve the rest of Young’s term, through December, and is running for the next full two-year term in November.

“It is the honor of my life to represent Alaska, a place my elders and ancestors have called home for thousands of years, where to this day many people in my community carry forward our traditions of hunting and fishing,” she said.

“I am humbled and deeply honored to be the first Alaska Native elected to this body, the first woman to hold Alaska’s House seat,” she said. “But, to be clear, I’m here to represent all Alaskans.”

“Don was a true institution, an Alaskan icon, someone who fought so hard and so well for our state for 49 years,” Peltola said.

Peltola said her priorities will include state economic issues which “are pushing too many of us to the brink,” as well as resource development and “fighting for our fish.”

Peltola also noted that she plans to move forward in a spirit of “bipartisanship and deep respect for this institution.”

“I might have a different approach than Don — you know how soft-spoken he was,” Peltola said, drawing laughter from the chamber. “But you will still be hearing all about Alaska, our people and our state’s unique needs.”

Peltola won Alaska’s first-ever ranked-choice election, as Palin and Begich split the GOP vote. The three will face off again in the November general election, which will determine who serves the next full two-year House term. 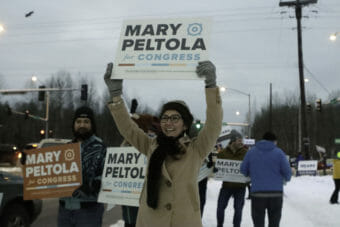 Finally, Peltola is sworn in for a full term in Congress

The mass swearing-in followed a four-day fight among Republicans over electing Kevin McCarthy, R-Calif., as speaker. 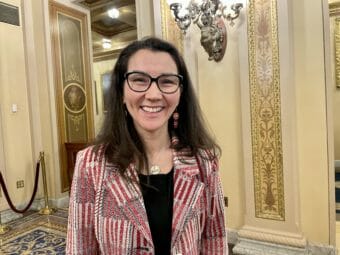 How about an Alaska-style coalition to end the impasse at the US House? Nice idea, Peltola says