For nearly 50 years, the National Oceanic and Atmospheric Administration laboratory on the outskirts of the nation’s northernmost community has tracked a steady rise of carbon dioxide in the atmosphere, the byproduct of fossil-fuel burning that is enveloping the Earth and trapping its heat.

Now the NOAA Barrow Atmospheric Baseline Observatory has a new, expanded, state-of-the art facility, with space for more research and experimentation and — finally — some creature comforts like flush toilets. Though the 2,730-square-foot building was completed in late 2020, NOAA hosted an official opening ceremony Friday, an event postponed by the COVID-19 pandemic.

While expansion to new and improved space that allows more science work to be conducted is good news, what is happening in the air it measures is less happy.

That compares to conditions in 1973, when the Barrow observatory was just a rustic 960-square-foot structure and when carbon dioxide levels in the air ranged between about 325 and 336 parts per million, varying by season.

Even on that early August day with sunny skies and green plants on the tundra still photosynthesizing and thus absorbing carbon from the air, the atmospheric CO2 levels at this Arctic location measured 402.57 parts per million.

“We’re over 400 and it’s not going back,” said Bryan Thomas, the station chief at the observatory. He remembers when 400 parts per million — a level first hit in 2012 — was considered the threshold that might shock people into climate action. Readings well above 400 have now become routine.

“When I stop and think about it, it makes me sad. We could have done more sooner. But now is a better time than never,” he said.

The Barrow Atmospheric Baseline Observatory is one of four such NOAA remote baseline observatories that measure the global atmosphere from the Arctic to the Antarctic. The three others are at Mauna Loa in Hawaii, in American Samoa and at the South Pole.

Last year, the global average for atmospheric carbon as measured by all four observatories set a record for the annual average, 414 parts per million. That compares to about 280 parts per million prior to the Industrial Age, according to NOAA.

“It keeps going up,” said Brian Vasel, director of operations at NOAA’s Global Monitoring Laboratory in Boulder, Colorado, who was in Utqiagvik for the opening celebration.

Much more than carbon dioxide gets monitored at the Barrow observatory and at its three sister observatories. There are constant readings for methane and water vapor, which are also greenhouse gases.

For the Barrow observatory, an important task is measuring particulates in the air, like black carbon and similar brown carbon, varieties of soot that darken snow and ice and reduce their ability to reflect solar heat. Dark colors absorb solar heat, and darker snow and ice melts more quickly. From the rooftop, NOAA technicians measure the degree to which the white landscape reflects the sun rather than absorbs it, a phenomenon called albedo.

The more expansive space at the new Barrow lab accommodates equipment to track permafrost temperatures and the movements within permafrost that are enabled by warming. And air sampling is enhanced by a new sensor-equipped tower outside the building that is 100 feet high, replacing the old 60-foot tower.

The observatories also measure chlorofluorocarbons, chemicals that eat away at the high-stratospheric ozone layer that protects the Earth and its inhabitants against solar radiation. A treaty signed in 1987, the Montreal Protocol, phased out and ultimately banned the ozone-depleting chemicals, and readings at the Barrow observatory and elsewhere tracked their decrease in the following years. But progress has not always been smooth.

The Alaska site caught a disturbing trend that started in about 2013. The level of a chlorofluorocarbon known as CFC-11 in the atmosphere unexpectedly slowed what had been a steep and steady decline that started with the treaty. That pointed to loopholes or outright violations of the Montreal Protocol.

The Barrow observatory was the first of the four to record the flattening trend that was later picked up worldwide. That wave-like pattern helped scientists pinpoint the source of the CFCs: east Asia. Corrective actions followed, and by 2018 CFC levels were back on their expected rate of decline.

“If we hadn’t been able to monitor that, we wouldn’t have been able to recover and get back on the trajectory,” Thomas said.

Aside from sampling on premises, the Barrow observatory sends samples to NOAA’s laboratory in Boulder, and the Boulder laboratory sends sealed air samples by barge to be used as controls. The Barrow observatory samples analyzed in Boulder are part of a worldwide system that ships to the site. “We are the world’s center for measuring CO2,” Vasel said.

The location of the Barrow Atmospheric Baseline Observatory is deliberate.

It lies about five miles north of the main part of Utqiagvik, on a strip of tundra between the Chukchi Sea and Elson Lagoon, far away from any significant development in existence or likely to happen in the future. Prevailing winds that come over the ocean from the west make the air there some of the purest on Earth and best for sampling and for giving a picture of how conditions at that high latitude affect the rest of the planet. Its Arctic location is critical, as the Arctic is warming at four times the global rate, according to the most recent calculations.

“We appreciate that we’re a very small part of the Arctic. But we have to pay attention to the whole Arctic and the whole world,” Thomas said.

As for the North Slope oil fields to the east, they are generally too far away to skew the readings, Thomas said. There are occasional shifts in wind that bring in dust and potentially other materials from Utqiagvik in the south, he said, but NOAA staffers know when that happens and adjust accordingly.

One factor that is affecting the carbon dioxide readings is the greening of the tundra. Of the four key NOAA observatories, the Barrow observatory has the biggest seasonal swings, and those are getting wider as tundra vegetation becomes more plentiful.

More plant growth means more photosynthesis and more carbon absorption in the sunny summer, but it also means more release of carbon into the atmosphere from plants that decay or die as winter darkness arrives. Warmer permafrost has an effect, too, allowing long-trapped carbon gases to stream up from the ground. There is growing scientific evidence that the release of carbon in the winter is outstripping the seasonal carbon absorption in the summer. A landmark 2019 study found that the warmer winters have already turned the world’s northern permafrost regions from being a net carbon sink into a new carbon source.

A more recent study, led by Donatella Zona of San Diego State University, presents a pessimistic outlook for the ability of tundra plants, like the lichen and sedges outside the Barrow Atmospheric Baseline Observatory, to work harder through absorbing carbon dioxide in the summer.

While there are more plants growing on the ground and they are emerging and photosynthesizing earlier, they are also losing their ability to photosynthesize and grow later in the summer, indicating that the growing season is not really longer but only shifting in time, according to the study.

Zona likened the plants’ energy to human energy. “When you wake up earlier in the morning, you are tired earlier in the evening,” she said in an online presentation to a science conference held last week in Utqiagvik to mark the 75th anniversary of the Naval Arctic Research Laboratory established north of town.

The impetus for the study, Zona said, was a puzzling finding about the “breathing” of the tundra – the lack of any significant increase in carbon uptake that would be expected to be tied to earlier snowmelt and earlier plant emergence. But there has been a marked increase in carbon respiration from the tundra, she said.

Something that is not contributing to local carbon emissions in any significant way is the new observatory laboratory itself. It was designed and built by UIC Nappairit LLC, a unit of the Native-owned Ukpeaġvik Iñupiat Corporation, as a LEED-certified building. The certification comes from the U.S. Green Building Council and is a widely used ranking system for structures with minimal carbon footprints and other environmental impacts. 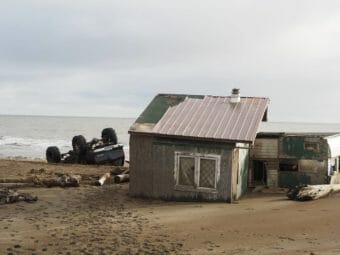 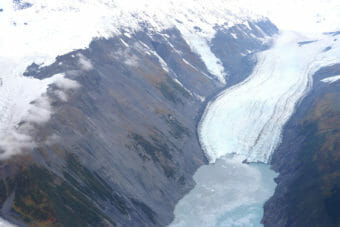 Barry Arm landslide's acceleration is 'the opposite of reassuring,' scientist says 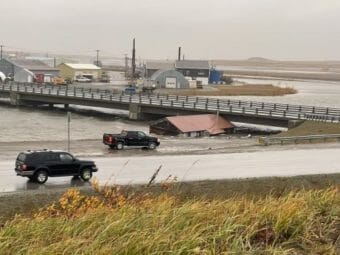 Bering Sea storm should be a 'wakeup call for Alaska,' climatologist says

Tropical Storm Merbok initially formed farther to the east of Japan than one would expect and picked up energy from water that was much warmer than it used to be.