Ballots in Juneau’s local election this fall won’t have questions about a proposed sales tax break on groceries. There’s been months of discussion on the topic at Juneau Assembly meetings. Now, the Assembly wants to finish the debate with a public opinion poll instead of asking voters directly on the ballot.

At the beginning of June, the Assembly was leaning toward asking advisory questions on the ballot. The questions would have paired the tax break with different options for new taxes to recoup most of the cost to the city.

The Assembly wants to know if voters would still want the tax break if it also meant one of these things would happen: raising the year-round sales tax rate to 5.5%, raising the sales tax rate seasonally to 6%, or raising property tax rates so most property owners would pay about 9.5% more.

But by the end of June, most Assembly members had become concerned about how those non-binding questions would look alongside separate, tax-related questions that will be on the ballot and are binding.

“These ballot questions I think would be super — just, confusing,” Deputy Mayor Maria Gladziszewski said in a committee meeting on June 27. “And then if the sales tax things pass, then we’d have to do it again, and people would have to vote on it twice, and then they’d be like, ‘Didn’t I vote on this last time?’”

The city charter doesn’t allow the Assembly to change the sales tax rate, so voters would have to approve it with another ballot question in another election.

There was also concern that including the advisory questions could confuse voters about three other ballot questions in the works that deal with funding major city projects. That includes funding to build a new City Hall.

“Man, I really had my heart set on removing sales tax with this Assembly,” said Assembly member Wade Bryson. “But I’m afraid if we try to squeeze it into this ballot, this October’s ballot, that it could have more harm than good.”

“So I’m wondering if we could achieve our same objectives by just hiring a firm to do a statistically valid survey,” Gladziszewski said.

Most of the other Assembly members were amenable.

A measure to commit up to $40,000 for the survey is set for public hearing and final vote at the Assembly’s next regular meeting on Aug. 1.

The timing for the survey hasn’t been decided. City Manager Rorie Watt told the Assembly he wants to avoid election season. 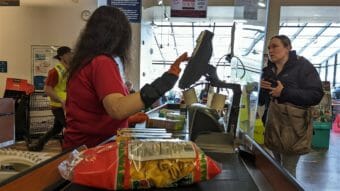 If groceries became exempt from sales tax and the sales tax rate went to 6% in the summer, the city's finance director has estimated that local households would on average save, a summer visitor would pay about $1 extra, and the city would lose about half a million dollars in revenue. 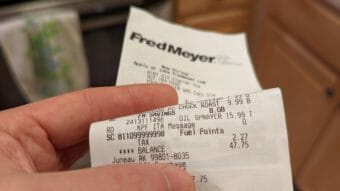