Some students, alumni and other community members have called for the university to cancel the event.

In a written message to the community last week, UAA Chancellor Sean Parnell wrote that the university must keep freedom of speech in mind when reviewing facilities-use requests. He emphasized that the university is not hosting the event — rather, the Save America political action committee is renting the Alaska Airlines Center.

“As a publicly funded university, it would be both illegal and unconstitutional to prevent a group from leasing university facilities based on speech that may occur in the facility or speech that we disagree with,” wrote Parnell, a former Republican Alaska governor. “Some exceptions to this First Amendment right do exist, but none of these exceptions apply in this case.”

Trump’s Save America PAC signed a lease agreement for $53,081 to use the Alaska Airlines Center. University spokesperson Catalina Myers said the university has not been paid upfront.

In a statement, student body president Katie Scoggin encouraged students to vote and to act safely and responsibly. At a meeting on Wednesday, vice president Shanone Tejada acknowledged students’ concerns.

“We are not hosting this event, nor do we condone any of the violence, hate and bigotry that is spewed from any character’s event,” he said. “We understand the concerns that students have been raising, and we are speaking with the administration about it.”

In his message, chancellor Parnell said the university, municipal partners and organizations in the area are working together to plan safety and security measures. He said the U.S. Secret Service is also coordinating security with local partners.

Trump is scheduled to deliver remarks at 4 p.m. Saturday. 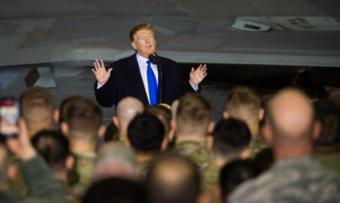 Palin was an early supporter of Trump’s during his bid for the White House and has continued to support him.

Trump accuses Murkowski of killing ANWR, vows to campaign against her

“Few people know where they’ll be in two years from now, but I do, in the Great State of Alaska (which I love) campaigning against Senator Lisa Murkowski," Trump tweeted.