Democrat Mary Peltola’s share of the vote rose above 10% when the final ballots were counted Tuesday in the special U.S. House primary, the state’s first election by mail.

Peltola is up three percentage points since the first count June 11, suggesting her campaign may have picked up momentum as the postmark deadline neared, or that her supporters were, for whatever reason, late to the mailbox.

The finish order of the top four candidates remained the same as it was on election night.

Republican Sarah Palin now has 27% of the vote. She’s far and away the top vote-getter, though she dropped three percentage points since election night.

One observer of voting behavior, Anchorage pollster Ivan Moore, surmised that Palin’s ardent supporters were sure they wanted to vote for her and mailed their ballots in well ahead of the postmark deadline. Democrats, he said, might have kept hold of their ballots as they searched for a candidate they liked and that could win.

Republican Nick Begich is at 19% — largely unchanged since the initial count on election night.

That also goes for independent former candidate Al Gross who has hovered around 13%. He dropped out of the election on Monday.

In fifth place, Republican Tara Sweeney finished at nearly 6% — up slightly from the first count.

The Division of Elections expects to certify the special primary results on Saturday. The special general election is Aug. 16. 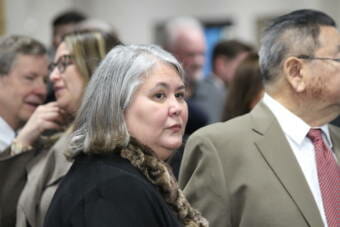