An Anchorage Superior Court judge is considering when and if it is legal for a state legislator to ban a constituent from the lawmaker’s legislative Facebook page.

On Wednesday afternoon, Judge Thomas Matthews heard oral arguments in a lawsuit brought by an Eagle River woman against Sen. Lora Reinbold, R-Eagle River. After hearing arguments, Matthews took the case under advisement, with a decision to be issued soon.

Bobbie McDow, the plaintiff, is asking for an injunction against Reinbold, plus financial damages and attorney fees.

The verdict could determine how Alaska state legislators conduct themselves on the internet in the future, and it’s already having an effect on Alaska politics.

In a video published on Facebook, Reinbold said she will not be seeking reelection. Explaining her decision, she cited the demands of the lawsuit against her and said she had spent more than $60,000 on her defense.

The lawsuit, filed in 2021, is one of several across the country that is attempting to determine whether an elected official’s actions on social media can violate a constituent’s constitutional right to free speech and association.

“This may be a novel question for the Alaska courts, but at least there are some courts around the country that have addressed these issues,” Matthews said.

Those other courts have split on the topic, and the verdict in this case could set a precedent for interpreting the Alaska Constitution online. At least one similar lawsuit has already been filed. On June 1, a constituent of Rep. Kevin McCabe, R-Big Lake, sued that legislator after being blocked from McCabe’s Facebook page.

Attorneys representing McDow and Reinbold agree on the basic facts: In 2021, McDow commented disparagingly on several of Reinbold’s posts on her “Senator Lora Reinbold” Facebook page. She also criticized the words of other commenters.

McDow criticized Reinbold’s remarks, saying in part that “Reinbold is attracting a lot of conspiracy theorists,” and told her to “stop whining and do her job.”

Reinbold deleted several of McDow’s comments and on April 29, 2021, banned her from commenting altogether for 24 hours.

McDow and her attorneys say that amounts to a violation of her free-speech rights because Reinbold was acting as a member of the state government, in a public forum, and discriminated against McDow because of her viewpoint.

One of McDow’s attorneys, Nicolas Feronti, told Matthews that the three-part test — action by a government employee, in a public setting, and viewpoint discrimination — is key to establishing whether Reinbold violated the free-speech rights guaranteed by the Alaska Constitution.

“It is important,” he said. “This is more than just a quip about Facebook. Our country, our state, our communities, all of our communities in this state — now, more than ever, in this political climate, we need a full and fair exchange of ideas.”

Reinbold is represented by Heather Brown, who presented a different view. Speaking to Matthews, she said Reinbold’s Facebook page is not a public forum and argued that it’s akin to a house leased from someone else.

“Facebook is a house, and she’s just a tenant leasing it,” she said, arguing that Reinbold’s page was not an official government page.

She disputed that Reinbold was acting as an official of the government when Reinbold’s ability to act as an official is limited to her actions within the Legislature. On her own, she cannot pass legislation or enact law.

“I think your honor has more power than she does,” Brown said.

McDow was banned from Reinbold’s page for 24 hours, and Brown said that action was taken because Reinbold believed she was acting simply to incite reactions from other users and not to express a viewpoint.

Feronti argued that there’s no other way to view the ban than as an act against McDow’s viewpoint.

“You can read it 100 times. There’s no other reasonable way to look at it,” he said.

In late 2021, the Legislature’s Select Committee on Legislative Ethics concluded that Reinbold violated state law when she banned a different person, retired biologist Rick Sinnott, from her Facebook page.

The committee recommended no punishment but said the Legislature should update its social media policies to discourage similar future actions.

That update has not taken place, and days before this week’s hearing, Reinbold filed a lawsuit against the ethics committee and the state, saying the committee acted improperly.

The suit asks a state court to dismiss the ethics case and award Reinbold a financial settlement. Neither the Legislature nor the Alaska Department of Law have formally responded to the suit, which has been assigned to Matthews. 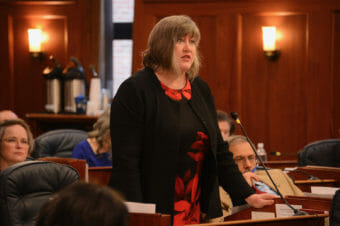 Over the past year, three state lawmakers have been sued for blocking comments on their social media accounts. 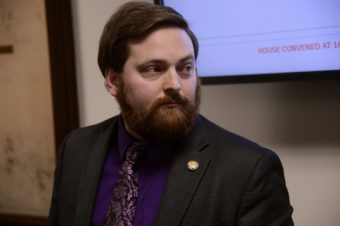 If Pierce and his running mate quit before Tuesday, Kurka would fill the No. 4 spot in the general election. 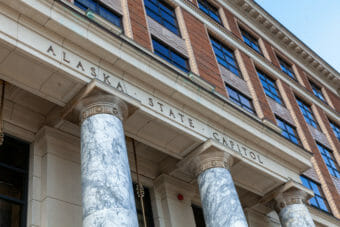 The draft included an ‘everything or nothing’ approach toward public comments.