The only oil company that bid in last year’s controversial Arctic National Wildlife Refuge lease sale has dropped the sole tract acquired in that auction.

The tract was the narrowest of the 22 offered in the lease sale. It is located on the northwestern edge of the refuge coastal plain. It borders an 88 Energy prospect on state land called Yukon, which itself borders the Point Thomson unit that has been producing natural gas condensate since 2016. On its website, 88 Energy said the acquisition of the ANWR lease “increased our position” at the Yukon prospect, but that any further development would depend on working jointly with other companies that hold leases and possibly farming out the work to others.

The Interior Department confirmed the cancellation and refund.

“Regenerate Alaska, Inc (RAI) purchased a 23,446-acre lease in the Coastal Plain of the Arctic National Wildlife Refuge on January 6, 2021, as part of the Arctic National Wildlife Refuge Coastal Plain lease sale,” Interior said in an emailed statement. “RAI requested to have the lease rescinded and its bonus bid and lease rental payments refunded. The Bureau of Land Management has a well-established procedure to do this, and last month rescinded and cancelled the lease, as requested.”

Of all the tracts offered, the Regenerate Alaska-acquired tract was the one for which development was the most economically feasible, according to an analysis conducted last year by the World Wildlife Fund of the United States. The analysis found that it would break even at an oil price of $62.50 a barrel in 2021 dollars compared to other tracts’ break-even prices that ranged up to $83.60. However, no production could start until around 2040, and none of the tracts were found to be economically feasible, according to the analysis.

The Regenerate Alaska-acquired tract was also on land where the state disputes federal ownership. The state has claimed it owns that slice of land next to the Canning River. The state is appealing a 2020 Interior Board of Land Appeals decision rejecting the claim.

Environmentalists said the Regenerate Alaska move, following industry disinterest in the lease sale, shows the futility of attempts to drill in the refuge.

“Last year’s lease sale—which was hurriedly held just weeks before President Biden was inaugurated–was a dismal failure for Donald Trump’s Interior Department when no major oil companies submitted bids because they know the public opposes drilling in the refuge and leases there are a terrible investment,” Karlin Itchoak, Alaska state director of The Wilderness Society, said in a statement. “Only the state of Alaska, which acquired most of the leases through the state-owned Alaska Industrial Development and Export Authority, is still clinging to outdated thinking.”

Last year, Chevron and Hilcorp Energy Co., the successor company to BP Alaska, gave up their claims to leases held on Native land within the refuge boundaries, the Anchorage Daily News reported. Chevron and BP had drilled a well there in the late 1980s, called the KIC-1 well after the Kaktovik Inupiat Corp., but the site was never developed. Chevron and Hilcorp paid the Arctic Slope Regional Corp. a $10 million “breakage fee” to cancel the leases, as reported in a footnote in ASRC’s 2021 annual report.

“While it is disappointing that the leases were relinquished, ASRC remains supportive of other future opportunities for development in ANWR,” the annual report’s footnote said.

The oil companies’ lease relinquishments do not change AIDEA’s plans to develop its seven ANWR leases, the head of that organization said  Thursday.

“We are still actively pursuing pre-development planning and permitting for seismic surveys. While allowed under the leasing program approved by Congress, federal agencies have been actively delaying permitting and access,” Alan Weitzner, AIDEA’s executive director, said by email. “While these investors in Alaska could be creating jobs and opportunity here in the state, they are unfortunately being persuaded by these federal agencies to look outside the US. 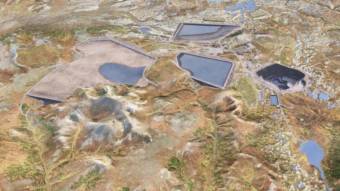 As EPA moves to block mining at the Pebble deposit, mine supporters and opponents look to details

The EPA said mining the Pebble deposit would result in unacceptable loss of salmon habitat, both at the site and further downstream.