Alaska has imported more wood bison from Canada as part of an effort to restore the animal’s population in the state. Some of the young animals will be added to a herd that the state established in Western Alaska in 2015.

The Department of Fish and Game and the Bureau of Land Management worked with Parks Canada to bring forty wood bison to Fairbanks last week.

State wood bison biologist Tom Seaton says the young animals were trucked to Fairbanks from Elk Island National Park in Alberta. He says the park has healthy bison available for Canadian conservation efforts, and this year they had enough to send some to Alaska.

“As far as bison standards go, they’re pretty small, but they’re about the same size as an adult female musk ox,” Seaton said.

Alaska’s new bison are 11 months old and weigh about 400 pounds each. Seaton says Parks Canada charged $16,000 for care and handling of the bison, which are now staying at the University of Alaska Fairbanks Large Animal Research Station.

“We’ve got to go through another 30 days of isolation of them here at LARS and then work toward plans of release,” he said.

Seaton says most of the young wood bison are likely destined to augment a group that was transplanted from Elk Island to the Lower Innoko-Yukon River region 7 years ago. That effort re-established the animals in Alaska, where they disappeared from the wild in the early 20th century.

Seaton says that in late June or early July, the new bison will likely get barged to an area along the Innoko River where the reintroduced herd gathers before the rut.

Seaton says the young bison will be held in a pen until they connect with the wild herd, which has remained in the area where 130 of the animals were initially transplanted in 2015. They currently number about 105.

Fish and Game Interior and Eastern Arctic regional supervisor says some of the newly imported animals could eventually be used to re-establish more bison herds in Alaska in places “that have yet to be determined.”

“So many members of the public and organizations, and government agencies, Native corporations and tribal entities and communities, all across Alaska and even beyond Alaska — it’s been an effort of great international interest,” he said.

Bruning and Seaton say the public can view the young wood bison at the University of Alaska Fairbanks LARS facility, but they caution people not to disturb the animals because they are still adjusting. 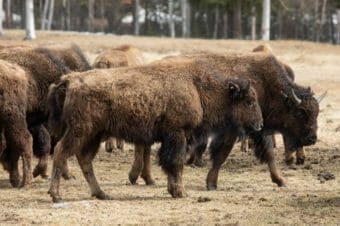 The 28 yearling wood bison are part of a group form Alberta’s Elk Island National Park that were trucked to Fairbanks in April. 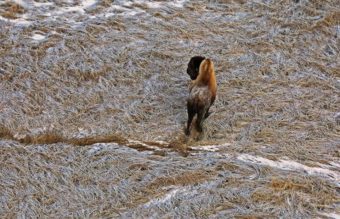 After over 20 years of hard work, a dogged crew of wildlife managers has successfully reintroduced wood bison to the tundra of Southwest Alaska. Now, they’ve received an award for it. 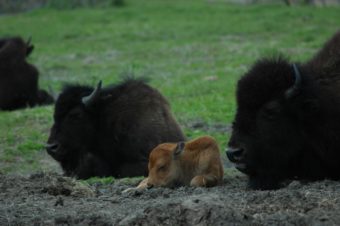 The first sighting of wood bison calves born in the wild could mean big changes in the ecosystem of western Alaska.