When she’s sworn in this summer, Judge Ketanji Brown Jackson will be the first Black woman to serve on the U.S. Supreme Court.

She’ll also be the first Supreme Court justice who has worked as a public defender. And that means a lot to public defenders like Lacey Jane Brewster. The Kenai attorney, who works for the Alaska Public Defender Agency, said the Supreme Court has been missing that perspective on the bench.

“Criminal law takes up such a big part of the docket in the federal courts and the state courts,” Brewster said. “And it’s important to have people on the bench who understand the perspective of a criminal defendant and what it’s like to go through a trial.”

Today, Jackson serves on the U.S. Court of Appeals. In the early 2000s, she was a federal public defender — a court-appointed attorney assigned to defendants who can’t afford their own lawyers.

The U.S. Senate confirmed Jackson to the bench last week. Alaska Sen. Lisa Murkowski was one of three Republicans to vote “yes,” while Sen. Dan Sullivan joined most of his Republican colleagues in voting “no.”

Brewster said some of the questioning from senators at those hearings showed the misconception public defenders often face — that they’re standing on the wrong side of justice or are in the work for the wrong reasons.

“But most of us are here because we’re zealous about defending people’s rights, which is a constitutionally mandated thing,” Brewster said. “We’re literally in the Bill of Rights.”

Brewster, for her part, decided she wanted to be a public defender when she was in law school. She said she had a professor who steered her toward the field.

Today, she works alongside eight other public defenders in Kenai representing defendants from across the peninsula. She said there are about 100 public defenders working at offices around the state.

Brewster said Jackson wasn’t on her radar before Biden’s appointment. But the judge was slated to speak to the Alaska Bar Association in Anchorage this upcoming October.

That was decided before Biden nominated Jackson, and it’s unclear whether she’ll still make the trip. Danielle Bailey, executive director of the Alaska Bar, said the group sent an email congratulating Jackson and is following up with another email this week to see if there are updates.

Bailey said she had hoped Jackson would focus her talk on her background with the criminal sentencing commission, which works to ensure fair sentencing in the court system, as well as her journey to the Court of Appeals. Now, she imagines the Supreme Court appointment would be a dominant theme.

“It’s a huge inspiration for any woman who’s practicing law, or thinking about practicing law, to see how women can really excel in the profession and advance,” Schmidt said.

She remembers one Alaska Bar conference talk from Sandra Day O’Connor, the first female judge on the Supreme Court. In 2008, Ruth Bader Ginsburg delivered a memorable speech about the role of dissent in the judicial process.

“I think it’s fantastic that there’s such a diversity of women justices now,” Schmidt said. “Each of the women on the court now come from different backgrounds and different experiences. I think it’s really important.”

Schmidt said it’s amazing that a former public defender is joining the highest court in the land. Like Brewster, she said it’s a job that’s often misunderstood.

“It’s very difficult to be appointed a judge when you’re a public defender,” Schmidt said. “In Alaska, it’s not uncommon. But it is certainly at the U.S. Supreme Court level.”

Brewster, who’s also a member of the Kenai Peninsula Bar Association, said she plans to go to the conference, too. She jokes that all the public defenders in her office will be up in Anchorage that day.

She said they’re excited to see a second side represented on the court. And she hopes Jackson’s appointment inspires current law students to give public defense a try.

“Because it is a profession that is valuable,” Brewster said. “And now that we have some recognition of the fact that, even on our highest court, someone with the experience of a public defender belongs there, hopefully it will inspire younger attorneys to think about going into public defense as a career.”

Jackson was confirmed to the court April 7 and will join the eight other justices on the bench this summer. 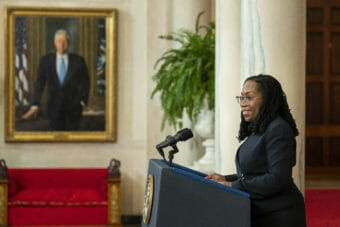 Sen. Dan Sullivan, like most Republicans, voted against confirmation. 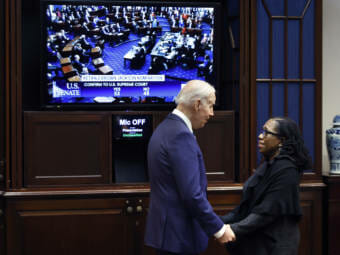 The Senate confirms Ketanji Brown Jackson to the Supreme Court

When sworn in this summer, Jackson will be the first Black woman to serve on the nation's high court.