An Alaska Native corporation is pursuing plans to build a second cruise ship dock in Whittier, potentially bringing more than 100,000 new visitors each summer to the tiny town on Prince William Sound.

Huna Totem has already created a cruise-based tourism industry in Hoonah, a Southeast Alaska village. It’s now proposing to build a 1,200-foot dock to moor ships in Whittier at the picturesque head of Passage Canal, about an hour’s drive southeast of Anchorage.

In public meetings with Whittier residents, Huna Totem has presented a project, called Head of the Bay, that would essentially create a new business district on the west side of Whittier, with a boardwalk for housing and shops, a gondola, a trolley as well as a new cultural center, boat harbor and fish hatchery. 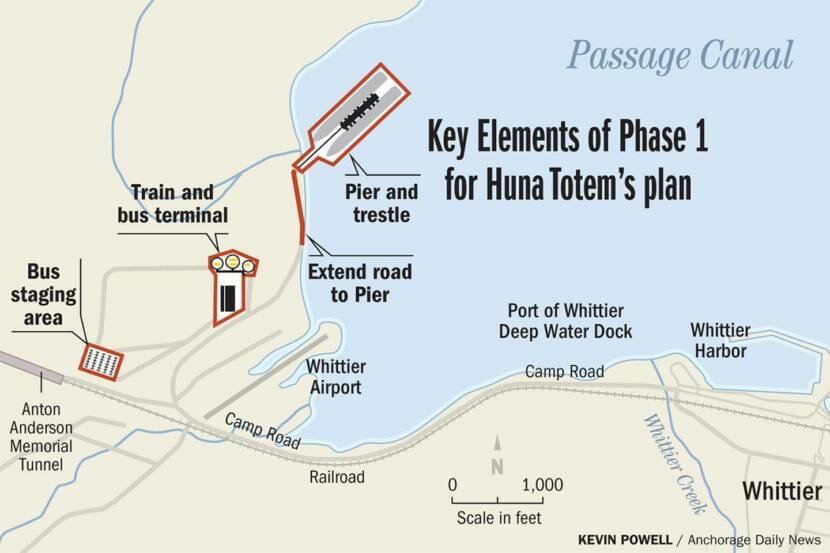 But Huna Totem officials say they are currently focused only on the first phase. That consists of the dock, the terminal where guests board buses and the train heading out of town, a road and small rail extension, and a bus staging area, said Mickey Richardson, marketing director with the company.

Initial estimates for the cost of the first phase exceed $80 million, with Huna Totem seeking third-party financing, Richardson said. The corporation is pursuing cruise lines to sign long-term agreements to use the dock.

Future phases of the project are more uncertain and could be many years away, according to Whittier Mayor Dave Dickason.

They would be built only if demand is there and the town supports it, Richardson said. That could involve partnerships between the city and private entities, possibly Huna Totem.

Whittier residents who support the project say it will bring much-needed city revenue, more jobs and business opportunities. But they want more information and say the town’s involvement will be critical to properly shaping the project.

Some who live and work in Whittier are skeptical of the idea, however. They worry more cruise ships and guests will hurt the town’s scenic setting and overcrowd the harbor and roads, including the only road out of town through the one-lane, World War II-era Anton Anderson Memorial Tunnel.

The existing dock in the community, owned by Princess Cruises, brought about 60,000 travelers to Whittier in 2019 before the COVID-19 pandemic halted cruise travel to the city, Whittier officials say.

This proposed new dock could bring an additional 110,000 visitors to Whittier each summer, Richardson said.

Most cruise visitors are expected to leave town quickly, arriving at night and catching the morning Alaska Railroad train through the tunnel, he said.

But some will want to see Whittier sites including the 14-story Begich Towers, a curiosity for tourists because it’s where most of the town’s 300 residents live.

The project was conceived last year. Huna Totem was looking for a tourism opportunity in Alaska when it settled on Whittier, Richardson said.

At the same time, the city of Whittier was acquiring 58 acres at a cleaned-up tank farm at the head of the bay from the Department of Defense, said Dickason, the mayor.

The timing was good, Dickason said. The city now owns the land, which is near the tunnel, and the terminal and bus staging area could be built on five of those acres.

Whittier is now in the process of creating a lease agreement with Huna Totem, he said.

The dock and other facilities could be built and ready for a trial run in late summer 2023, with full operation in 2024, Richardson said.

The mayor said the project could be a “turning point” for Whittier, opening up a new area in a city that owns little land for expansion.

The first phase could boost Whittier revenues by $2.6 million, or 40%, Dickason said. That could help upgrade infrastructure that in some cases dates back to World War II, when the city was a military supply post, he said.

“It would provide the revenue we need that secures the future of Whittier,” Dickason said.

Cathy McCord, the seafood plant office manager and a city council member, said the project is a rare growth opportunity.

“It will help establish a future for children growing up in Whittier,” she said.

Other council members are less certain about the project.

Dan Blair said the first phase could be good for Whittier, though he and other community members have many questions that need answers.

He said the first phase could increase competition for hard-to-find workers, hurting businesses. And it will place new demands and costs on local services such as police and emergency response, he said.

Some in the community worry that Whittier’s already crowded boat harbor will become more so as more cruise tourists book small boats for fishing trips or for wildlife and glacier viewing. They foresee longer lines at the state-run tunnel.

Cruise visitors usually follow a preset land package that benefits the cruise lines but not mom-and-pop shops, he said. And cruise guests often don’t spend much money compared to people traveling on their own. He asserted that the industry looks out for its own interests first, not a community’s.

“Where is the positive economic impact of their presence? I don’t see it,” he said.

Kelly Bender, president of the local chamber of commerce, owns Lazy Otter Charters with her husband. It’s a sightseeing and water taxi service in Whittier.

But the project needs to be done right, she said: If not, the extra guests could hurt Whittier’s small-town charm and mountain-studded scenery. The city may need to look at requirements to encourage local ownership for new businesses and placing limits on sportfishing to protect fish stocks, she said.

“Being in favor of this project hurts my wilderness values a little bit,” Bender said. “It feels like I’m being disloyal. But we consciously support it and really want to be at the table to make sure Whittier gets what we’d like.”

At the Anchor Inn restaurant in Whittier recently, owner Joe Shen sat at a table catching up on bookkeeping. He said he supports all phases of the proposal.

Anchor Inn waitress Veronica Fausto said she’s OK with a new dock, but the plan must include requirements to treat businesses fairly. In the future, she said, a trolley should be built to shuttle cruise guests to each of the town’s three restaurants.

“I don’t think it’s bad, but we need more information,” she said of the project.

Richardson said the company has created a sustainable tourism industry in Hoonah, a Huna Tlingit village of 800 in Southeast Alaska.

Icy Strait Point, as the cruise destination in Hoonah is called, highlights the local Native culture.

The New York Times in January listed Hoonah as one of its annual “52 Places” for travelers to visit in 2022.

In Whittier, Huna Totem’s goals include extending electricity to the dock so ships can cut diesel engines while in port, he said. Richardson said the location of the proposed cruise dock will separate most cruise visitors from the town, as Huna Totem has done in Hoonah.

Guests who linger in Whittier could create opportunities for new businesses and tours, he said. Whittier’s rich history, near an ancient portage for Chugach people trekking into the Turnagain Arm area, provides opportunities for cultural tourism, he said.

Whittier is “one of the most beautiful places in the state to dock, and we’d like to see more people spend time there,” he said. “Our goal is to find a right balance for the city and to encourage new tour products that benefit people from the community of Whittier as well.”