Barge rates have gone up in the new year across Southeast Alaska. But the rising cost of hauling goods into coastal communities isn’t the only reason a trip to the grocery store might be more expensive.

Alaska Marine Lines, one of the largest barge companies supplying Southeast, increased its general rate by 4.8% on Jan. 30. And freight costs will go up again next week when a fuel surcharge increase takes effect on Feb. 6.

As an island community, Wrangell relies heavily on bringing in supplies on these private sector barges.

“The only thing that comes by airplane is the packaged salad,” said Jake Hale, the manager of City Market, one of two supermarkets in town. “Everything else is on the barge.”

When the price of freight goes up, Hale says, so does the price of pretty much everything at his Wrangell grocery store.

“A gallon of milk weighs eight pounds,” Hale said. “So if we ended up paying six cents more pound for freight to get it up here, that’s 48 cents, that has to get added on to that gallon of milk.”

And price hikes are coming.

“We’re looking at record increases,” Hale said. “Not only are we looking at increased prices from the manufacturers and the wholesalers, shippers, but the fuel prices are huge. And when they go up, everything goes up.”

Hale says that depending on the products, he’s expecting 5-8% price increases on grocery store items this year.

“That’s probably the highest I’ve seen it in my career,” he said. He’s worked for more than three decades in grocery retail, and just shy of three years in Wrangell.

As a member of the industry group the National Grocery Association, Hale says he sees rising prices as an answer to a multifaceted problem.

“This is like the perfect storm,” he said, referring to supply chain issues nationwide, including for basic packaging materials like aluminum or cardboard. And packaging and processing plants have experienced shutdowns due to COVID-19.

“Basically every stop from the creation of the product to when it gets sold in the store costs more,” Hale said. “And there’s not much we can do about it.”

Companies have raised wages to attract workers and truckers in a tight labor market.

“Last year, I went four months without getting a single application,” Hale said.

City Market bumped up pay as well, which is a cost that gets passed on to the consumer. All that is on top of increases to barge freight and fuel surcharges setting in after the new year.

Wrangell’s local government has been monitoring barge rates because it’s a major driver in the cost-of-living. A rate study commissioned by the borough found Wrangell’s rates have risen an average of 4.5% every year, so the recent general rate increase of 4.8% from Lynden and Samson isn’t without precedent.

As for fuel costs, a spokesperson for Lynden, AML’s parent company in Seattle, says the fuel surcharges are tied to rising fuel prices. In fact, according to AML’s fuel surcharge rate sheet published with the Wrangell freight rate study, the company’s fuel surcharges have been artificially low for almost two years — as low as 6%.

Barge rates in Alaska are monitored by the Surface Transportation Board, which oversees the cost of shipping freight between communities. But the federal agency doesn’t intervene in freight pricing unless there’s a complaint. The state of Alaska’s Attorney General has, in years past, investigated the barge companies’ arrangement.

There’s always a cost of shipping added to a product, Hale adds. Whether it’s by truck, plane or boat.

“Barging product is not perfect,” Hale said. “But it is so much better than the alternatives I’ve used in the past.”

It’s one part of the price of living in a relatively remote part of Alaska. 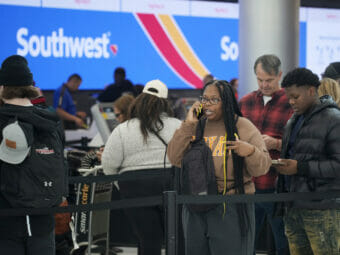