“File it under sovereignty if you want, but right up there with sovereignty is our food,” Bennett said in a phone interview.

In her new role, Bennett says she plans to continue pushing for stricter environmental standards for mines near rivers that flow from Canada into Southeast Alaska. Conservationists and tribes say mine waste threatens salmon runs in the region. Bennett says she plans to continue working with groups like Salmon Beyond Borders and the Southeast Alaska Indigenous Transboundary Commission to push for a ban on tailings dams that hold back mine waste along cross-border rivers.

“Part of my priority is to keep putting some attention on that because salmon is our way of life,” she said. “It’s our canary in the mine for the environment.”

She says she’s planning trips to Washington D.C. and Ottawa in the coming months to keep the pressure on.

Closer to home, Bennett says she plans to continue a push to have Ketchikan designated as a rural area under a federal law that governs who can participate in certain subsistence hunts and fisheries.

“Access to the land is equals access to our foods. It’s been that way — my great grandfather was Chief Shakes in Wrangell in … the 1890s, and he was fighting for the same thing: access to our lands and our foods. So that will continue to be a focus for me and this tribe,” Bennett said.

As it stands, the Federal Subsistence Board considers most of Ketchikan, with the exception of Saxman, to be a non-rural area. And that means most people in Ketchikan can’t hunt or fish under subsistence rules on federal lands.

“We fought for the fishery to open for subsistence users on the Unuk (River) for eulachon every spring, and we actually won — people could go out and get five gallons each. But we didn’t get to go ourselves as a community, and our tribal people weren’t allowed because of that rural designation,” she said. “It’s just not right.”

Bennett says another area of focus is addiction, mental health and homelessness.

“It all goes together,” she said. “We have a lot of amazing programs and services and a treatment center in the works that we’re working on plans for. We’ve gotten through a feasibility study, so that’s coming down the pike, and (we’re) looking forward to collaborating with the rest of the community. We know it’s a real need here.”

Beyond that, Bennett says she plans to put her new business and management degree and her experience on staff to use making KIC a better place to work and get health care.

Before assuming the presidency, Bennett worked for the tribe’s clinic for more than a decade before winning a seat on the tribal council in 2018. These days, she runs a small online traditional medicine store called Tongass Tonics and says she’s in talks to purchase another downtown business.

“Our traditional foods, a lot of our people never have had to this day because they get shipped out to the highest bidder. I’d like to see more of those things offered by businesses in town,” she said. 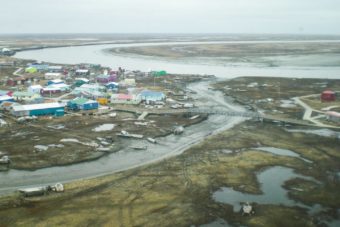 Instruction for the school’s roughly 200 students is happening online for the foreseeable future.