The horizon glows deep orange under a cloudless, dark sky along Nushagak Bay.

It’s Christmas morning in the Russian Orthodox tradition, the start of slavii. And it’s the second year the parishioners are celebrating in a pandemic. That means they will have to celebrate an important part of the holiday differently.

As the service continues, more people arrive. Some take disposable masks available in the church entrance. Two men move to the front of the room holding tinsel stars with pictures of saints in the middle. They start to spin the stars, and slavii begins.

“Starring” symbolizes the birth of Christ and ushers in the new year. Normally, carolers twirl bright tinsel stars in households around their communities. Some travel to other villages as well.

“Slaviing this year is a little different compared to last year. If we do go slaviing – people need to give us a call. Invite us to their house,” said Subdeacon John Casteel.

He stands at the front of the church during a break in the service, explaining how this year’s celebrations would be different.

During slavii, people usually go from house to house to sing, visit, eat and rest. This year, the parish used social media to announce the changes, and ask people to call if they wanted slavii carolers to visit. If the carolers do slavii at somebody’s house, they’ll ask the host how many people can enter.

Slavii is a Russian Orthodox tradition in what’s now Ukraine. But it has a long history in communities around the state, including Bristol Bay. Carols here are sung in Yup’ik and English as well as Slavonic, an archaic Russian dialect used by the Orthodox Church.

“My grandpa was John Nelson. He was the chief of the church, and he ingrained a lot of Christmas spirit into us, that we should go sing and make grace that the Christ is born and to open our homes to all the slavii-ers,” Casteel said.

They didn’t slavii in person last year, and she said this year, local public health officials discouraged doing so. Those changes are difficult.

“After church we’re used to hugging and kissing and carrying on, but you know, over the past two years, none of that’s been happening,” Casteel said. “We lost a lot of our Elders over the last two years, and that’s what makes it emotional, too. We love our Elders. And, you know, at this point, I think all we could do is say prasdnikom from the St. Seraphim of Sarov in Dillingham, Alaska.”

This year, Casteel said, they’re trying to find ways to celebrate safely: they’ll still bring the star to people who ask for it, but they’ll limit the number of carolers who enter each house. They are also hoping to stream carols on Facebook Live for people who can’t receive the start this year.

Angasan always enjoys this time of year, and she said gathering is important, even if it’s from a distance.

“I think when everybody gathers together, it feels like home,” she said. “It feels like family, and it’s really good to see a lot of faces, and just like I said, it’s pretty emotional to keep our distance from everybody.”

Angasan and others will slavii until Jan. 14, when they will celebrate New Years with a bonfire in Aleknagik. 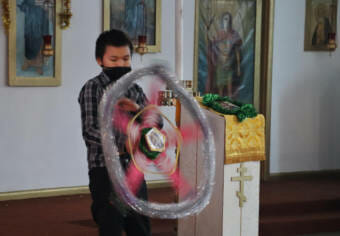 People in the Eastern Orthodox Church marked the start of Christmas last week with slavii — a beautiful holiday with deep roots in communities around the state. Celebrations look a little different this year, since travel and social gatherings are limited.