A small group of people sings through cloth masks. It’s slavii at St. Seraphim of Sarov’s Orthodox Church in Dillingham. At the front of the church, a boy is spinning a star decorated with tinsel. Normally, he’d be surrounded by others doing the same.

Father Jason Isaac is the rector in Dillingham. Despite restrictions, he said, the spirit of the celebration hasn’t changed.

“I’m very surprised to see the joy. The message of Christ being born will always be celebrated joyously,” he said. “With this year being different because of COVID-19, the people are still trying to bring joy to each other by singing here the carols.”

Carolers twirl bright tinsel stars in households around their communities. Some travel to other villages as well. “Starring” symbolizes the birth of Christ and ushers in the new year.

Slavii is a Russian Orthodox tradition in what’s now Ukraine. But it has a long history in Alaska and Bristol Bay specifically. Carols here are sung in Slavonic, an archaic Russian dialect used by the Orthodox Church, but also Yup’ik and English. People usually go from house to house to sing, visit, eat and rest.

“Throughout the days up to (Jan.) 13, they’ll be going outside people’s homes, singing carols as they did once a long long time ago,” he said.

Dora Andrew-Ihrke is a parishioner at the Holy Resurrection Church in Aleknagik. She’s celebrated slavii for seven decades.

“We elaborately decorate a star that we twirl in memory of the star that the wise men followed,” she said. “We go from house to house in remembrance of that, celebrating Christ’s birth.”

Andrew-Ihrke has strong memories of slavii when she was young.

“We went by dog team in Aleknagik,” she said. “We didn’t necessarily travel to villages ’till later years when we had my dad’s car and could go on the road from Aleknagik to Dillingham. Which enabled us to then fly to where our relatives were, where the strongest church was, and that was at New Stuyahok.”

They also traveled to Ekwok, Koliganek, Clark’s Point and Ekuk. In later years, they went east to visit Igiugig and Iliamna.

This year, Andrew-Ihrke said they are turning to technology to bring music into their homes.

“I told my family that they can celebrate by having the songs sung at our house tonight. We can use our phones and sing to various important people,” she said.

Instead of going to homes, Andrew-Ihrke shared a message from Matrona Gallear, an Elder who’s in her 80s.

“She also wanted me to voice that the church is praying for all people in Bristol Bay, and to say Plassniku, Praznikum, happy Russian Christmas Day,” Andrew-Ihrke said.

Worshippers in Dillingham will star at cemeteries and outside of homes throughout the holiday. 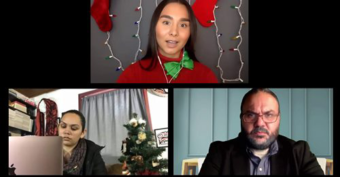 In Perseverance Theatre's “A Tlingit Christmas Carol,” Scrooge is a successful CEO of a Native corporation subsidiary in an unnamed town. He’s also a boarding school survivor. 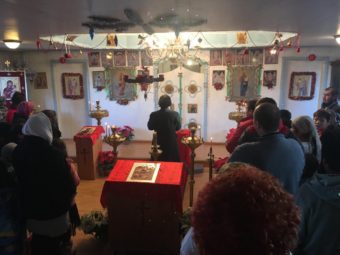 Starring will continue for the next several days. The holiday season runs through the Orthodox New Year on January 14th. 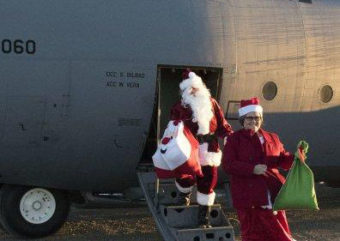 Santa is going to be a little late to a few villages this year. Freezing fog in Bethel this week, and the week before, prevented the Army National Guard from flying their UH-60 Black Hawk to Akiak, Tuluksak, and Grayling to deliver toys and food for Alaska’s 60th Operation Santa Claus.