The Wrangell Public Library’s 100th birthday fell on Halloween. Generations of Wrangellites have enjoyed the services of the century-old institution.

Compared to its usual calm, quiet atmosphere, Wrangell’s Irene Ingle Public Library was buzzing with activity on the afternoon of Oct.28. A black and gold spiraling balloon arch framed tables with punch, coffee, and two cakes, both covered in black and orange frosting rosettes, and sporting “100”s.

“I feel honored to be a part of this library story here in Wrangell,” said assistant librarian Sarah Scambler, holding a piece of cake on a small, black and gold plate. Scambler says her mom used to work at the library, which brought her in often.

“I participated in the summer reading program growing up,” Scambler says, “And then I moved back, I had a young family, and we started coming to story time. Then when Lana retired, I applied for the job and was fortunate enough to get it.”

Scambler says she did a bit of research in the run-up to the 100th-anniversary party. She says it’s given her a unique perspective about what it took to get — and keep — a library in Wrangell.

Wrangell’s public library began as an idea put forward by the ladies’ Civic Improvement Club in 1913.

It took eight years for the idea to be realized, but there was wholehearted public support for the establishment of a library.

T.C. Havens, a local businessman, was among the Wrangellites who committed to buy a subscription to a magazine to fill out the library’s shelves. He also said he’d volunteer to paint, stain and varnish anything necessary in the library. Also, Havens wrote in a 1921 letter to the Wrangell Sentinel that “if it becomes absolutely and unavoidably necessary, I agree to go over to the library one day each week and make ardent love to the librarian in order to keep her on the job.”

The offer went unclaimed. With donations from Wrangell residents and the failing Perseverance Mine near Juneau, the library opened on Halloween of 1921. It started out as a room in the City Hall building, which is now the Senior Center. Local government donated the room, as well as heat and lights.

Havens, the businessman who offered to pleasure the librarian, also donated a model airplane to hang in the library when it opened, to be studied by “older boys who wish to try airplane construction.”

Its first librarian was Helen Hofstad, who presided over the 802-book collection — about one for each town resident at the time. It also had a subscription to nearly 40 periodicals. In its first month, the library issued 58 library cards, checked out 153 books, and seven magazines.

In 1929, Wrangell’s library was one of the first five libraries in Alaska to receive funding from the territorial government. While it started as a subscription model, the library quickly became one of the few free public libraries in Alaska. To raise money, the Friends of the Library held benefit dances and sold prepared dinners.

In the ensuing decades, the library also hit a number of rocky patches. It was moved to the old school building, which sat where the library gazebo now stands. Wrangell’s town council offered to help fund the librarian’s salary, then rescinded the funding three years later.

When the namesake of the library — Irene Ingle — was hired as head librarian in 1951, the library didn’t have heat, running water or a bathroom.

Scambler — the assistant librarian — isn’t the only Wrangellite who’s got a multigenerational history at the library. Kristy Woodbury came to the library’s birthday party with her son, Stuart.

“It’s neat to have something so consistent,” Woodbury said. “I went here when I was little, and now I can bring my kids here.”

Along with Woodbury’s kids, Lilly Ellis is another kid who frequents the library.

“I don’t really like reading,” she says with a grin, “But for some reason, I really like the library and getting books.”

Ellis says her favorites are books that have “the old school mythical creatures.”

For Alice Rooney, who came to Wrangell in 1975, the library is a place she feels comfortable. It’s one of the first places she came to in town, she says, and the fact that it’s a century old speaks to its community value.

“I think it means that we really value what the library has to offer, and that is more than books,” Rooney said. “It’s been a gathering place. It’s been a community center. It’s opened our eyes to new technology, been a meeting place for different meetings, and all kinds of interests, more than just books.”

Irene Ingle has been quoted as saying that “a town can be no better than its school and library.”

In the 100 years since it began as a small reading room in City Hall, the library that bears her name has weathered its struggles, due in large part to the commitment of community members to keep it open.

How do you find a century-old shipwreck in Southeast Alaska?

A crew of researchers isn't just relying on high-tech gadgets to locate the lost ship. They’re also turning to the historical record. 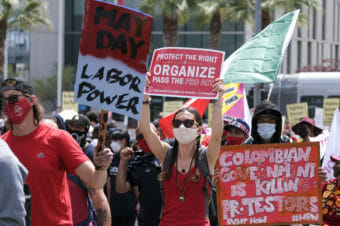 What is May Day? For the most part, the opposite of capitalism

What springs to mind when you hear May Day? In the U.S. and abroad, the day has grown to encompass a spectrum of meanings. But the themes have remained the same: worker unity, suppression and rebirth.