A multimillion-dollar road project on Kupreanof Island in Southeast Alaska is finished, the Alaska Department of Transportation & Public Facilities said.

The state spent $40 million to extend and upgrade the remote road outside of the Southeast Alaska village of Kake across the northern side of the island to a new boat ramp about 12 miles from Petersburg. DOT construction project manager Garrett Paul said the road opened to the public on Friday.

“It finished up on Saturday with the last remaining items of work which were redecking and reinstalling new bridge rails on existing bridges out there and demobilizing the camp,” Paul said. “So the project is done and the contractor is no longer on site.”

International company Kiewit built the roughly 5 1/2 miles of new road along with upgrading over 20 miles of existing roadway on that part of the island. The cost of the construction work was around $34 million. The remainder of the 2012 legislative appropriation went toward planning, design and oversight on the project.

“The bridge work that occurred in the last couple weeks was extra based on some remaining funds that we had,” he explained. “The bridges that were out there are 20 years old or more and they needed some help. So we did that. We also put out some signage. We did an extra culvert for Fish and Game for fish passage. We tried to consume the project funds by enhancing the roadway whether it was existing or the new.”

The $40 million in state funding was secured by Sitka Republican Sen. Bert Stedman. He championed the project as a way to improve connections between Petersburg and Kake and the economies of the two communities. It was questioned and opposed by residents in both communities, along with the tribal government in Kake and environmental groups. Petersburg’s assembly sent letters and resolutions asking for hearings on the project but those never happened.

Paul said some motorists are already using the new road and said it’s an upgrade from an average gravel road through the forest.

“Especially the new work that we did, it has an 18-foot width,” he said. “It has pullouts intermittently. The existing road that we tied into, I think we improved four miles of existing road on the Kake side and then we improved a lot of the road network because of construction equipment and needing to move that around. So I guess to connect the dots we did a lot of road improvement just to move around on the island.”

Workers installed directional signs to guide motorists along the roughly 42 miles from Kake to the new boat ramp at Twelvemile Creek. DOT has no plans to plow the road so it will only be usable when it’s not covered with snow. The state likely would fix washouts or other damage.

There’s a parking area near the new boat ramp on the eastern end of the road for vehicles and trailers. A gravel pad remains where Kiewit had its several dozen workers based during the construction on the eastern side of Portage Bay. 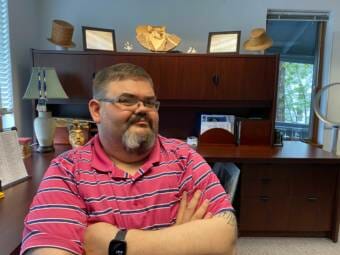 When President Chalyee Éesh Richard Peterson looks at the list of 14 traditional tribal values, he doesn’t see anything exclusive to one religion. 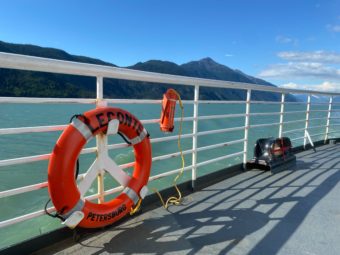