The University of Alaska Fairbanks has moved the “Into the Wild” bus to a UAF engineering building lab for repairs.

Originally dragged into the wilderness for a road-building camp along the Stampede Trail, the 1940’s Fairbanks public transit bus is where young adventurer Christopher McCandless lived and starved to death in 1992. His story was popularized by the book and movie, “Into the Wild.”

The state helicoptered the bus out of the wilderness in June 2020 to stop people from making a dangerous hike out to see it. Under an agreement with the state, the UAF Museum of the North plans to create an exhibit around the vehicle. But up until this week it remained in storage.

Senior Collections Manager Angela Linn, who is leading the bus project, says the UAF Engineering Building’s high bay lab is an ideal facility to begin preparing the bus for display.

“It’s dry, it’s warm, it’s safe there. It’s kind of the best possible solution on the campus for doing this next phase,” she said.

Linn says the bus project involves materials science as well as structural engineering, so it will provide learning opportunities for students.

“Understanding the structural elements of objects and how they degrade over time and what can we do to slow that degradation process down,” Linn said. “It’s a great educational opportunity.”

She says the first project is to thoroughly photograph and 3D-scan the bus for both documentation purposes and potential development of a virtual tour, which could have an “augmented reality component.”

“You could place yourself in the bus back on the Stampede Trail,” Linn said.

A team of about 25 people are helping guide the broader bus project. Linn says the future exhibit will be about the bus’s entire history, not just Christopher McCandless’s story.

As far as readying the actual bus for eventual permanent outdoor exhibition, Linn the plan is to stabilize its condition and make it safe. The bus has rust holes, broken windows, and worse.

“There’s big holes in the ceiling and in the floor from when they helicoptered it out,” she said

Linn says a cost estimate for the project is still being developed.

“It’s gonna be a big number, though, for sure,” she said.

Linn says the museum plans to raise money for the bus repairs and exhibit development through a mix of sponsorships, crowd funding and grants.

In the meantime, the public can view the bus inside the UAF Engineering Building on weekdays from 8 a.m. to 8 p.m. through large windows overlooking the high bay lab. The museum says it also plans to install a webcam so the public can watch the conservation work online. 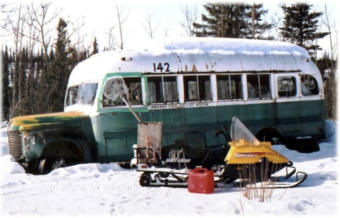 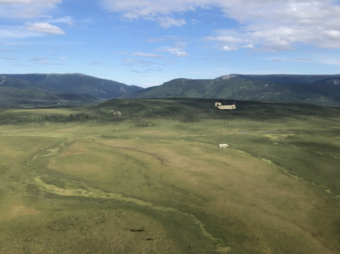 Photos posted to Facebook on Thursday show a twin-bladed Chinook helicopter carrying the bus away from the remote site it occupied near the Teklanika River, where it attracted numerous tourists who had to be rescued after the book’s publication. 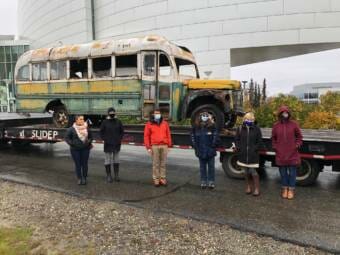 'Into The Wild' bus back in Fairbanks

McCandless's sister says the bus can be a powerful educational tool, including about the mistakes her brother made that led to his starvation in the wilderness.