Juneau police say they have a detective assigned to the case. Farnsworth’s older sister, Kiersten, is in Juneau searching for him now. She believes he’s dead and is asking for anyone in the community who may know something about his disappearance to call.

Kiersten Farnsworth flew up from Arizona to find him. She said she knew something was wrong when his social media went dark — she reported it on Sept. 27.

“My brother is a very, very huge media person. He makes a ton of TikToks. He’s always on Facebook,” she said. “He called my mom and he said he was going to come home, and he didn’t.”

She’s been able to find some details about where he was on the last night anyone heard from him.

“He called one friend around one in the morning, and they didn’t answer. He called another girl at 3:15 a.m. and tried to flirt with her, and that’s pretty much their whole conversation,” Kiersten Farnsworth said, laughing. “Then after that, it just goes silent.”

Farnsworth said state troopers have been helping with the search. Juneau police said earlier this week that they assigned a detective to the case, but Farnsworth said they haven’t been very helpful.

“JPD actually told me, they don’t look for people that don’t want to be found,” she said. “So I wasn’t too impressed with JPD.”

The truck that Doug Farnsworth was driving was found up near the Perseverance Trail, and Kiersten Farnsworth said a lot of people have been up there looking.

“But at this point, we don’t think that’s the area where he’s going to be located,” she said.

Farnsworth said she’s found no evidence that her brother is in that area of town. She didn’t want to get too deeply into the reasons why, but she said her family believes that he is dead.

She said she’s driven up and down the highway out to Auke Bay looking for a place where he could be. She wants the community to know that anyone who knows something about the case should call. She says the family needs closure.

“He could be wherever — I have no problem driving to wherever. Yesterday, I climbed down the bank of Thane and moved a tarp,” she said.  “My body hurts really bad.”

Doug Farnsworth was living with and taking care of his mother. Now that he’s gone, it’s hard for her to leave without knowing where he is.

“I live in Arizona, and my mom lives with my brother. She really, really relied on my brother, and now she wants to come back with me. But we’re stuck at that point where she doesn’t want to feel like she’s abandoning him. Because it’s not abandonment. It’s us knowing he’s gone,” Kiersten Farnsworth said.

Kiersten and Doug grew up in Juneau, in Lemon Creek. They’re Lingít. She laughs when she talks about how many cousins they have in town.

She said a lot of people in town know him because he was an active part of the community.

“He brings people out of their shells. He worked at Gastineau for a long time with troubled kids, and they all loved him. He’d flip attitude straight around. He went by Dougie Fresh. He made hilarious Halloween costumes, just really animated people — people just really liked him,” she said.

She said she’s happy to see so many people come together and help look for him.

Anyone who knows anything about where he might be can make an anonymous report to Juneau’s Crime Line online or at 907-523-7700. 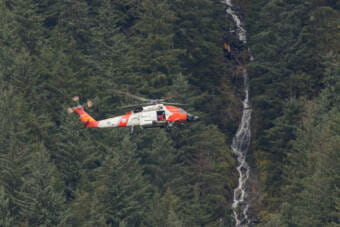 Family of missing Juneau man asks for help finding him

Douglas Farnsworth has been missing for more than a week.