A Juneau man has been missing for more than a week. Family and friends have been posting on social media and searching for Douglas Farnsworth for several days.

Farnsworth’s sister, who goes by Kiki Dawn, describes him as a non-stop poster on social media. “He would never stop or just vanish like this,” she wrote in a message.

On TikTok, where he has nearly 11,000 followers, he last posted in late August.

Juneau Police Lt. Krag Campbell said the department assigned a detective to Farnsworth’s case on Oct. 1. That detective talked to family and found out that Farnsworth was driving someone else’s truck. That truck was found near the Perseverance Trailhead area by the Flume Trail. 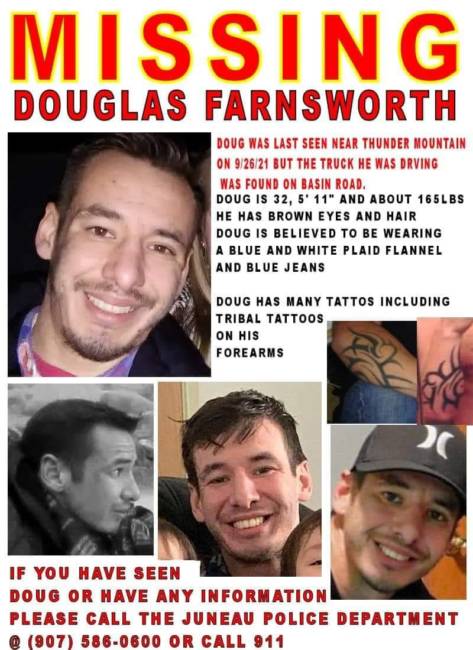 “That in itself was just unusual because the keys were left in it, there were some personal items belonging to Mr. Farnsworth in it,” Campbell said.

After the truck was found, Juneau police contacted the Alaska State Troopers to launch a search.

“They didn’t think he was out like, hiking or anything,” Campbell said. “There [were] reasons to believe that he wasn’t doing that but maybe he had gone into the woods and may need some assistance in getting back.”

Troopers and SEADOGS were searching near downtown on Friday and into Saturday. The Coast Guard was doing flyovers of downtown looking for Farnsworth.

But Campbell says they didn’t find any trace of him. Campbell said SEADOGS didn’t pick up a scent.

“Then you’re just kind of blindly searching in the woods, and it’s just such a huge area to cover. That’s not something they’re typically doing,” he said.

So for now, Campbell said Troopers have called off their active search, though he said they can start it up again if they get new information.

Campbell said JPD still has a detective investigating the case.

One of the last times Farnsworth was seen, he was contacted by Juneau Police on Sept. 27 about a misdemeanor Driving Under the Influence charge. But Campbell said he doesn’t think that’s the last time anyone saw Farnsworth — he said they got a report that someone saw him driving in town on the 28th.

Now, she said she is traveling to Juneau. She says he wasn’t an avid camper or hiker.

“We need to find my brother,” she said.

Campbell says anyone who knows something about Farnsworth’s disappearance can contact 586-0600 or make an anonymous report to Juneau’s Crime Line.