Seal meat makes up a good portion of what’s in subsistence hunters’ freezers in Kotzebue. However, the sea ice the seals haul out on is diminishing, and new research has shown the window to hunt seals is getting shorter as a result.

Iñupiaq hunter Cyrus Harris has harvested ugruk, or bearded seal, his whole life. For many people in Kotzebue and the surrounding region, the rotund mammal is a dietary staple.

“Ugruk, once we process it into a seal oil form and using it as a preservative for the meats, the product itself is very nutritious,” Harris said. “We may be processing this stuff in the month of June, but we’re thinking ahead to fill our Siglauq, or storage, with product that’s going to run us through the winter.”

Harris says the hunting season starts in the spring, as the sea ice breaks up in the Kotzebue Sound. But he’s noticed a change in the season length.

“Once the ice flows break loose and are drifting north, we’d have about a two-week timeframe to do that on a regular hunting season,” Harris said. “But the shortest I’d seen it happen was about three days.”

The sharp decline in the season length can be directly linked to the decline in sea ice due to a warming climate. That’s the finding of a new collaborative study conducted by the Native Village of Kotzebue and the International Arctic Research Center at the University of Alaska Fairbanks.

Alex Whiting is the environmental program director for the Native Village of Kotzebue. He’s a co-lead author on the study and has been documenting the change in the ugruk hunting season for almost 20 years. He says it’s become more relevant as the tribe has studied the change in sea ice extent.

“Notes that I had been taking since 2002 did show a pattern of shorter ugruk hunting seasons because the ice would disappear a little bit earlier and earlier over time,” Whiting said.

That change has translated to an average loss of a day per year for the hunting season since 2002. The study found that the season is ending an average of 26 days earlier than normal. Whiting says the sea ice extent fluctuates.

“Some years it resembles a little bit like it used to in the 20th century,” Whiting said. “But other years, like 2018 and 2019 in particular, by the time the ugruk hunting season began, the ice in the Kotzebue Sound, which was 70 to 80 percent gone already, looked like it would at the end of June or the beginning of July.”

With these changes, Whiting says hunters are having to plan their hunts earlier in the year.

“If they wait, all you need is a week of strong west winds, and you could lose out on your opportunity for that year,” Whiting said. “Because the ugruk hunting season only occurs during that short window of May, June.”

To date, researchers haven’t seen any drastic decline in hunters’ ability to land ugruk, but it’s largely due to hunters adapting to the shifting ice.

Donna Hauser is a marine ecology researcher with the International Arctic Research Center and the other co-lead author on the study. She says normally hunters would have a lot more sea ice to travel out on to harvest ugruk, often meaning packing more gear and gas for their boats. That is changing as the sea ice extent becomes smaller.

“Some sea ice had grounded close to Kotzebue, within 10 miles,” Hauser said. “And so people could make more frequent, shorter trips, use more gear, less gas, and actually be really successful still. So hunters have had to adapt to these changing conditions. That has allowed them to still be successful, despite the sea ice loss.”

In researching the impacts of sea ice extent on ugruk hunting, Hauser says the process was collaborative from the start. That meant input from more Western academics at the university level, but also the inclusion of village officials as well as an Indigenous Elder Advisory Council, something Whiting from the tribal office says is a first. Hunters like Harris were added as co-authors of the study.

Hauser says the co-production of knowledge was valuable, and the research wouldn’t have been as robust without the inclusion of Indigenous knowledge from the study’s inception.

“This is really responding to Indigenous sovereignty over the entire research process,” Hauser said. “It creates a more inclusive and sustainable research process, which hopefully will lead to more equitable outcomes in terms of incorporating those Indigenous perspectives in climate change planning and adaption.”

As Hauser and others look forward to further collaboration, hunters like Harris say they’re looking ahead to this upcoming winter, to see what sea ice it’ll bring for spring. 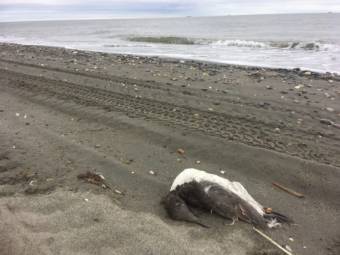