A group of University of Alaska Fairbanks researchers and students who spent six weeks at an archeological site just west of the city are compiling reports on what they found in the area, where the gold-mining town of Chena boomed more than a century ago — before going bust.

UAF Term Assistant Professor Justin Cramb took a break from helping excavate the foundation of an old log cabin to explain to a visitor why he and a group of students are digging around in a wooded area off Chena Pump Road near the north bank of the Tanana River.

“What we’re looking at is basically the foundations of old structures,” he said. “Things that were left behind after the town of Chena was abandoned.”

The casual observer wouldn’t know a town with dozens of buildings and hundreds of residents once stood in what’s now a swampy thicket, overgrown with willow and alder.

The town was founded in 1902 and served as a commercial hub during a gold rush that drew hordes of miners into the Interior during the first decade of the last century.

“Fairbanks comes into existence just a little while later,” he said. “And they become competitors.”

Chena had the advantage of location — right on the Tanana, conveniently accessible to the big riverboats and also near the mouth of the Chena River. Freight could be off-loaded there and and transferred onto smaller boats, which took the goods and passengers on to Fairbanks and beyond.

But historians said Fairbanks had a different advantage.

“Fairbanks was far more successful politically, which was one of the factors that led to the downfall of Chena within 20 years,” Cramb said.

The political success came in the form of influence exercised by the legendary Judge James Wickersham, who persuaded federal authorities to build a courthouse in Fairbanks. Miners had to go there to stake their claims, which attracted other gold-related businesses, including some formerly based in Chena.

Before long, most of the town’s population followed. Railroad tracks were pulled up. Vacant structures were dismantled and salvaged.

“Buildings were repurposed — taken to either Fairbanks or Nenana,” Cramb said. “People moved out, and then Chena was just abandoned.”

Several decades later, the state built a day-use picnic park at the townsite. But for the most part, it sat empty for nearly a century. Then, seven years ago, UAF researchers Josh Reuther and Scott Shirar began excavating the site. And in May, Cramb and his students picked up where Reuther and Shirar left off.

“We’ve found glass bottles,” Cramb said. “We’ve found leather boots that we tentatively will place with the Chena era. A ton of metal nails that are of course one of the hallmarks of historic archeological sites …”

One of the UAF undergrads working at the site says excavating and analyzing all those artifacts has deepened her appreciation for anthropology. And it’s convinced Sheri Karikomi to apply for grad school to continue study the subject.

“It helps me understand a lot more about cultural anthropology,” she said. “How people — how they lived, y’know, based on their culture and things that are left behind — their structures, their small artifacts, big artifacts.”

The students have cataloged most of the artifacts they collected during the archeological field school, which ended late last month. Cramb said he and Reuther and Shirar are analyzing their findings and compiling a detailed report, which they plan to present at this year’s Alaska Historical Society meeting and a national historical archaeology conference in Philadelphia next year. After that, they plan to publish their findings in academic journals.

Editor’s note: Click here to read a report on the challenges of locating and surveying the Chena Townsite written in 2013 by Fairbanks historian, surveyor and retired municipal platting officer Martin Gutoski. 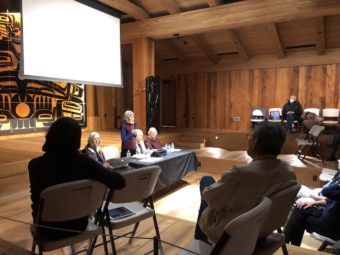