Natola Hawthorne headed back home to Atlanta Friday and her main job as a school secretary. But she spent most of the summer enjoying Alaska and honing her craft of umpiring, as one of very few women involved in the male-dominated sport.

Hawthorne was geared up with pads and a face mask Thursday night at Anchorage’s Mulcahy Stadium for a game between the Mat-Su Miners and the Anchorage Bucs, where, as the home plate umpire, she was calling balls and strikes and not getting too much guff from the fans.

But being a female umpire is more than just a game to Hawthorne, who wants to show girls they can be a part of baseball too.

Still, she admits, she didn’t actually know she was the first female umpire in the Alaska Baseball League until she got here.

Read a full transcript with slight edits for clarity:

Natola Hawthorne: So when he first invited me, he just told me, ‘I want you to come so that you can grow and get better.’

And then when I got here, he was like, “Oh, by the way, you’re the first female.”

So that’s when it kind of hit me like, “Wow, the magnitude of what I’m doing is not just for me, but it’s setting the stage for other women who may be given the opportunity now.” Because I was the first one to do it.

Casey Grove: What do you think the significance of that is to the ABL itself?

Natola Hawthorne: That diversity and inclusion, with everything that’s going on, it lets everyone know that, “Hey, they’re also a part of the movement.” They have no problem with embracing everyone that wants to be a part of the sport.

Casey Grove: Why aren’t there more female umpires in baseball?

Natola Hawthorne: One, we don’t like the weather [laughs].

It is pretty tough — the fans can be a little tough. We’re emotional creatures. So you have to have thick skin, you have to know when to exert yourself and when to be not so present. And I think that’s kind of hard.

Even for me, I have my moments where I’ll be like, “Hey, you’re not a girl out there. You’re an official. So make sure you react in that manner.”

Casey Grove: I suppose when you put on the uniform it maybe helps to remind you you’re the ref or you’re the ump.

Natola Hawthorne: What I do is say “action” at the start of each game.

It’s like I’m putting on a performance for the next three hours, and I need to be enrolled and in character. So that’s my take on it.

Casey Grove: So is there also kind of a thing about just baseball: it’s been a man sport forever, kind of unlike some other sports. People have seen a female ref in the NFL and stuff like that. Do you think that’s part of it, too?

Natola Hawthorne: I do. And it’s also with, other sports reach out to women because there’re more women in that area. In my lane, in Georgia, I know there’s only three in the whole state.

So that’s why I’m so sold on being a presence, letting them know, “Hey, I’m here. We’re out here, and I’m going to help you.” So every little girl that I see in the park, I try to stop and tell them, you can do this. Or if a mom stops me and says, “Oh my gosh, we’ve never seen a female umpire.” And I just say, “Well, I hope I made you proud.”

So I’m hoping that they take these moments back to their communities and say, “Hey, softball player, your career doesn’t have to end. You can now flip it and be an umpire.” That’s my goal.

Casey Grove: Do people treat you differently do you think?

My first experience here, I don’t think the fans knew that there was going to be a female umpire. So when they first saw me out there, everyone was kind of in awe and the coaches didn’t know how to approach me one because I’m not a guy.

I heard the fans were having a debate. They were going back and forth. Is that a female? Nah, that’s a man. Nah, that’s a female. And then finally, by the fifth inning, they said they were able to tell because I put my hand on my hips. So to me, that’s a compliment, because that meant that I was doing my job, and they didn’t have to wonder what my gender was.

Casey Grove: If you could just kind of sum up your experience here in Alaska. Had you been to Alaska before?

Natola Hawthorne: This is my first time and of course, people were like, “Why would you go to Alaska to call baseball when there’s plenty here.” Ask yourself that question: Who wouldn’t come to a place they’ve never been to do what they love to do. That’s why I’m here.

Alaska is beautiful. The scenery, the people. I told folks from back home. If everyone was like the Alaskan people, it would be a better place. 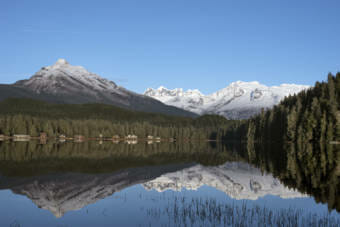 The Ironman triathlon is coming to Juneau on August 7, 2022.

Lydia Jacoby is headed back to 12th grade and another year of swimming for Seward High School. 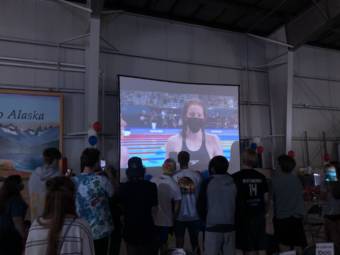 Lydia Jacoby looked like a winner even before gold medal race, dad says

Jacoby's father says he knew his daughter had the training to be able to win, and her mind was in the right place.