While Alaska lawmakers agree over many parts of the state budget, they once again face a major challenge in determining the size of permanent fund dividends. But there are even larger obstacles to quick action on a proposed amendment that would put PFDs in the Alaska Constitution. They include uncertainty over everything from the price of oil to whether there will be new taxes.

Gov. Mike Dunleavy recently proposed amending the Alaska Constitution to include permanent fund dividends at a level that’s currently $2,300. And when the state Senate passed its version of the budget on Wednesday, that’s the PFD it went with.

That amount would be 50% of the annual draw from permanent fund earnings. A 2018 state law set that draw at 5 percent of the fund’s average value over the previous five years. The other 50% of the draw would pay for government services.

Soldotna Republican Senate President Peter Micciche says voting for dividends similar to the amount under this 50-50 formula was a statement about where senators stand, even if the details of the budget must be worked out.

The dividend at that level is less than the roughly $3,500 Alaskans would receive based on the formula in state law, which the state hasn’t followed in six years.

The $2,300 PFD amount received support from both conservative and liberal senators. So with the governor on board as well, why isn’t it on a clear path to being adopted?

It comes down to another number: $1.5 billion. That’s how much the state would draw over the $3 billion it already planned to spend from permanent fund earnings this year. If the state spent that much every year, nonpartisan budget experts project there would be nothing left in the permanent fund’s earnings reserve within 10 years, and no money for PFDs.

Nome Democratic Rep. Neal Foster chairs the committee that will recommend the PFD amount for this year to both chambers. The House Representatives didn’t include the PFD in its version of the budget and members of the House majority don’t want an overdraw. Foster says there will be give and take.

“But at the end of the day, it’s still an overdraw and I know that there’s a lot of folks who really don’t want to do that.”

Both Micciche and Foster believe some form of new revenue would be necessary to pay larger dividends than in recent years. But Gov. Mike Dunleavy hasn’t supported any large new taxes, and he says any broad-based statewide tax like a sales or income tax would have to be approved by voters.

Foster says the governor’s position is a potential hurdle.

“A lot of folks on both sides of the aisle are in agreement that, you know you seriously need to look at additional revenue, but if right off, right out of the starting gate, you’ve got that issue of, you know, the governor saying no new taxes unless it goes for a vote — that is a challenge,” he said.

Micciche says the administration knows that setting dividends at 50% of the draw would leave a large hole in the budget. But Dunleavy used only generic language about revenue in his proclamation for a second special session. So Micciche wants Dunleavy to introduce specific revenue bills to fill the hole.

Some lawmakers remain adamant that neither taxes nor a change in the dividend formula should happen until there’s a new limit placed on how much the state can spend.

“We would definitely like to see some long-term budget reduction. Some big-picture budget reduction,” she said. “I’m not talking about going into agency (budgets), but what can we do to bring the cost and the spend of government down.”

Another challenge to finding a long-term solution is getting lawmakers to agree on the size of the problem. A computer model used by the Legislature’s nonpartisan budget analysts forecast a deficit of roughly $1 billion per year over the next nine years with dividends equaling half of the draw.

But the administration projects deficits that are somewhat more than half that size, roughly $600 million per year. Much of the difference between that number and what the legislative model forecast is due to the administration assuming that future budgets will include cuts that the governor hasn’t proposed yet.

And lawmakers continue to talk about how the deficit would shrink if the permanent fund grows faster than projected. The fund has grown dramatically over the past year, and is now worth more than $77 billion dollars.

Anchorage Democratic Sen. Tom Begich says the Legislature and Dunleavy must start off on the same page about the size of the gap.

“It’s critically important for us to work off of the same assumptions,” he said. “And that’s the problem we have here. We have different sets of assumptions.”

Two changes that happened in March made the apparent size of future state deficits much smaller. Between December and March the administration substantially increased its forecasts for both oil prices and production over the next decade.

Altogether, the oil revenue forecast for 2030 increased by 70% in three months. It has the effect of cutting the projected deficit by an average of $600 million per year over the next decade.

University of Alaska Anchorage economist Mouhcine Guettabi says lawmakers’ eyes have to be open to the risk involved.

“I was really surprised that nobody seems to be talking about the big effect the revision is having on the conversation,” he said.

He notes that oil production has fallen since 1988, so a decade-long rise would be a large change.

And if the oil forecast is wrong, Guettabi notes that the state could be facing large deficits in the future, even if lawmakers can agree on a long-term plan for the budget.

Leaders from both House caucuses said that their talks are focusing on the vote on the effective date for the budget bill the Legislature has already passed.

A bill protecting the graves of Unangax̂ people forced to live in internment camps in Funter Bay has passed the Alaska Legislature and awaits Gov. Dunleavy’s signature. 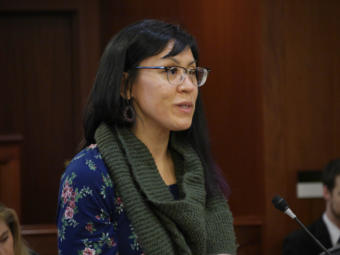